The Continental name evokes high-speed travel over long distances in the lap of luxury. Fittingly, that is exactly the experience that Bentley’s Continental models provided to the favored few during the 1950s.

The S1 Continental of 1955 featured the last of Bentley’s long-lived six-cylinder engine, which, being a Rolls-Royce design, was smooth and silent but also appropriately powerful. Road-test figures published in Autocar recorded a top speed of 120.5 mph. An exceptionally rigid welded box-section chassis was mounted on a new front suspension that had a semi-trailing wishbone and repositioned rear springs, which improved handling and softened the ride, while a three-way safety braking setup enabled sure stops at the end of those high-speed journeys. The rear suspension was electrically controlled, and it could be changed to normal or hard by a switch on the steering column.

While successive V-8–powered S2 and S3 Continentals were also offered until well into the 1960s, many viewed the S1 as the more desirable model; it is simpler, lighter, and slightly quicker, and it accomplishes all this while still being luxuriously comfortable, in the best British tradition.

OVER 25 YEARS OF ENTHUSIAST OWNERSHIP

Chassis number BC54LAF is the most desirable catalogued S1 Continental body style, the drophead coupe by Park Ward. Unlike the majority of Bentley convertibles in this era, this style is not an “adaptation” from factory sedan stampings but a fully custom body built from the ground up by Park Ward’s craftsmen. It is distinguished by its smooth, subtle body lines with long, fully “flow-through” fenders that flow from the front to the rear “hips” and rear fenders that kick up slightly into tiny tailfins.

This car is one of 31 factory left-hand-drive chassis bodied by Park Ward as a drophead coupe. Copies of factory build information from the Rolls-Royce Foundation, which are on file, record it as having been equipped with sealed-beam headlamps, whitewall tires, Windtone horns, and a speedometer in miles per hour, all of which are still present today.

The car was originally delivered to Thomas D. Neelands Jr. by New York dealer J.S. Inskip on 11 May 1956. A bond salesman in the early 1920s, Mr. Neelands built a considerable fortune through bold investments and had been active in early commercial aviation efforts, including helping to create United Airlines and financing the formation of Beechcraft. He retained his Bentley until 1971, when it was acquired by William S. Payson, of Southport, Connecticut. Later that year, it passed into the long-term ownership of Leon Levine, of Schenectady, New York, before joining the care of renowned collector Robert M. Lee in 1988.

Following its acquisition by Mr. Lee, the Bentley, showing about 53,000 actual miles, was cosmetically restored by the respected firm of Vantage Motorworks in Miami, Florida, and remained on display in his collection until the consignor purchased it in 2015. The new owner then commissioned further restoration work by Antique Auto Restoration of Seaside, California, including careful disassembly, minor metalwork, and a concours-quality refinish in the original color scheme, Silver with Blue accents, with dark blue carpets and a new dark blue top. The work was beautifully performed and today the car is presented in the same superb condition as when it was new.

S1 Continental drophead coupes are very seldom offered for sale, and fewer still have been so fortunate to enjoy such good, long-term care by conscientious keepers. This is one of the finest surviving examples and would be well suited to long-term ownership in another superb collection – which is, of course, simply continuing a tradition. 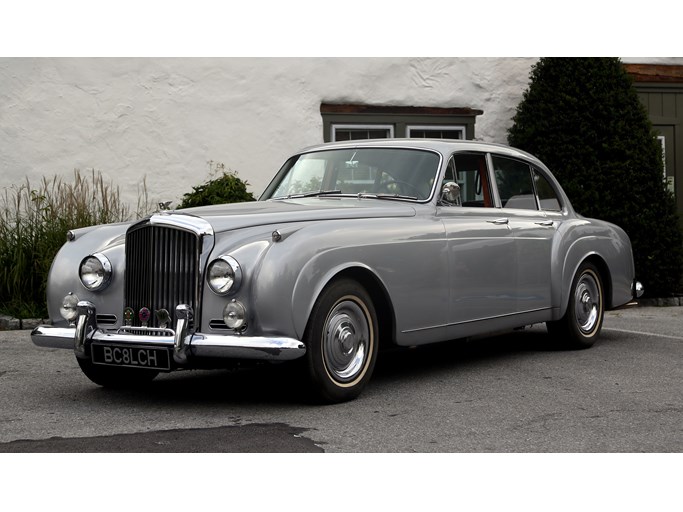