Catalogue
Chassis No.
Engine No.
Body No.
0377 GT
0377 GT
13942
Please note that Internet bidding is not available for this lot. Interested parties that are unable to attend the sale may register to bid by telephone or place a commission bid online at rmsothebys.com.

As the first Ferrari to carry the now legendary 250 series nomenclature, the 250 Europa marked the beginning of a wonderful time in Ferrari’s history. It was revealed to the public in January 1953, and it would be Ferrari’s first true grand touring automobile, showing that the company was willing to produce cars for well-heeled customers who preferred to drive their cars on the road rather than on the track.

In addition to being the first road car of the 250 series, the Europa is unique amongst other members of its family for being the only one to carry the Aurelio Lampredi-designed V-12. This engine, which was used in previous racing Ferraris, could produce over 200 horsepower and was capable of propelling its chassis and coachbuilt bodywork at speeds in excess of 135 mph.

Its coachwork was just as striking as the performance of the Europa itself, as it was designed and fabricated by Pinin Farina. The company was finally coming into its own in the early 1950s and was beginning to establish its own look and feel for the Ferrari bodies it was manufacturing. Pinin Farina’s design for the Europa proved to be a perfect blend of sportiness and elegance.

The 11th of 27 standard 250 Europa GTs produced, chassis number 0377 GT was completed with its handsome coupe bodywork by Pinin Farina on 26 November 1954. Equipped with three Weber 36 DZ3 carburetors, the car was originally finished in a rather striking color combination of Azzurro (Duco 4354) with a Grigio (MM 15702) roof and Beige leather interior.

The factory delivered the 250 Europa GT in January 1955, through Luigi Chinetti Motors, to original owner Jan de Vroom. A beneficiary of Margaret Rockefeller de Larrain and her husband Raymond, De Vroom was a silent partner and major financial backer to Chinetti’s North American Racing Team (NART), as well as an avid amateur Ferrari racing driver of the period, often co-driving with partner George Arents. He was described by Dominick Dunne in Vanity Fair as “a tall, blond adventurer who dominated drawing rooms by sheer force of personality rather than good looks.” Reportedly, he maintained this particular Ferrari in the South of France, where one of his several homes was located.

In 1970 the car was imported to the United States by a new owner in Houston, Texas. It was sold through John Delamater to architect and noted early Ferrari collector Ken Hutchison of Tower Lake, Illinois, next passing to George Rummel. In the 1980s, it was acquired by well-known vintage racer and collector Dennis Machul of Oak Brook, Illinois. Mr. Machul had the car fully restored to its present appearance, in burgundy with a tan leather interior, and memorably registered it in Illinois as ‘SCUZA.’ He displayed the car at several Midwestern events and drove it in the 1991 Copperstate 1000 and Colorado Grand. It was also photographed by the late Nicky Wright for his book, Ferrari: The Enduring Legend (pp. 30–33), and appeared as a color feature in Cavallino number 68 (pp. 29–31), pictured without its bumpers.

The current owner acquired the car in the early 1990s. It has been exhibited only once in that time, at the Meadow Brook Concours d’Elegance in 1997, while otherwise maintained in a private collection. Overall the restoration is quite well-preserved, with very good, deep, rich paint, good chrome, and an interior that appears tight, fresh, and virtually new. Inspection indicates that the steering box is a correct replacement unit. The odometer at the time of cataloguing reflected 4,236 miles, and a correct full-size spare is housed in the trunk. Overall the car would require little more than continued detailing and servicing to show at further concours events, though the temptation to refinish it in the striking original colors cannot be denied. 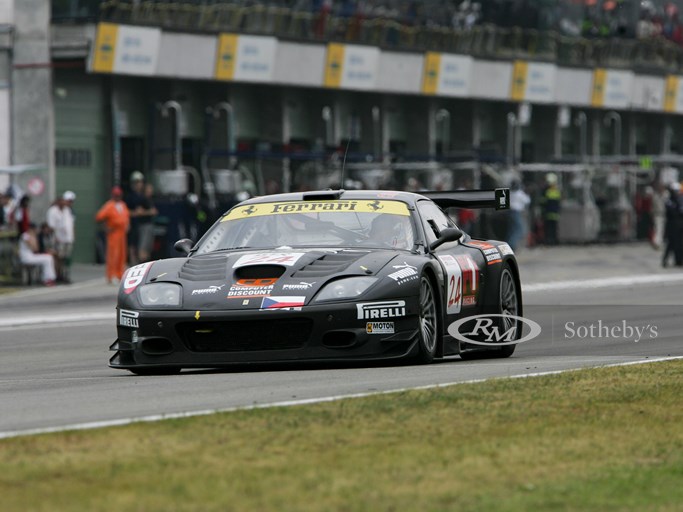