Contrary to Ferrari’s usual practice of introducing their newest model at a major auto show, the company chose to show their new 330 GT 2+2 to the public for the first time at their annual pre-season competition press conference in January 1964, with a more formal appearance occurring the following month at the Brussels Salon. With its bodywork designed and built by Pininfarina, the 330 GT 2+2 differed greatly from the 250 GTE and the interim 330 America, as it was fitted with an unusual four-headlamp nose that some say was styled to attract American customers. Underneath, the car featured numerous updates and included a wheelbase that was 50 millimeters longer than that of the 250 GTE, a Dunlop dual-circuit braking system, and Koni adjustable shock absorbers.

The second-generation 330 GT 2+2, later dubbed the Series II, was introduced halfway through the 1965 model year. Its most noticeable change over the first-generation model was the replacement of the car’s quad headlights with a more subtle dual-headlight treatment. The body gained different side louvers, which allowed for better engine ventilation and mimicked the design of the 275 GTS. Ten-hole cast alloy wheels were fitted as standard to all Series II cars, but the hugely popular Borrani wire wheels remained available as optional extras. The car’s interior was also given a minor refreshing, namely a redesigned transmission tunnel that was connected to the central dashboard, which further necessitated changes in the location of the dashboard switchgear.

Chassis number 08279 is a highly compelling example within the realm of Series II 330 GT 2+2s. It is believed to be the only example to have been finished in the unique Avorio (19377) color by the factory when new, and it is the first 330 GT 2+2 to utilize twin engine mounts instead of the older quad engine mounts of the Series I cars. According to information from Ferrari historians Marcel Massini and Jarrett Rothmeier, 08279 was also fitted with a Beige Scuro interior (VM 846), power windows, and air conditioning.

Wilson would go on to own the car for over 20 years. He first offered the car for sale in the Ferrari Market Letter, volume 17, number 25, where he had noted that it had “collector’s custom factory trim” and that it had been recently restored. Additionally, it was also fitted with a number of unusual accessories, including a four-spoke steering wheel in place of the traditional three-spoke Nardi steering wheel, unique front and rear bumpers, a unique driver’s side mirror, and a unique gas cap. The car remained for sale with Dr. Wilson for the following five years, even when he moved from Houston to Flagstaff, Arizona.

In 1995, the car was purchased by the current owner, who more recently decided to fully restore the car to show standards and return it to its original shade of Avorio. The 330 GT is accompanied by an extra set of Borrani wire wheels, in addition to its factory-correct alloy wheels, and its original and very rare blue-painted factory jack.

Chassis 08279 is a highly intriguing example of the most desirable variant of the 330 GT 2+2. It stands out from the crowd, with its numerous custom features, and will undoubtedly attract attention wherever it goes. For the individual looking for a unique Ferrari with a story to tell, look no further. 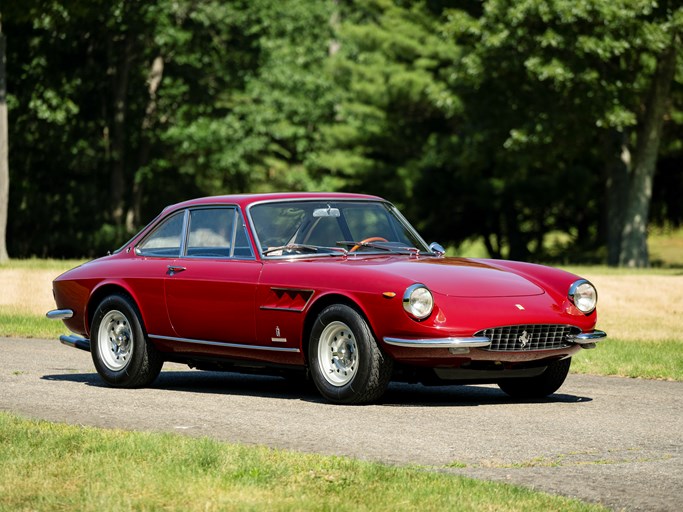