This result represents not only the highest total ever for a sale held during the Amelia Island week, but it also exceeds the combined total of all other auctions during this week, reaffirming RM Sotheby's clear market leadership. The incredible 98 percent sell-through rate, which includes 13 individual million-dollar-plus results, is a testament to RM's reputation for offering best-of-category automobiles.

Taking top sale honors of the day and of the entire Amelia Island Concours d'Elegance week was the 1960 Ferrari 400 Superamerica SWB Cabriolet, chassis number 1945 SA, achieving a very strong $6,380,000 to comfortably set a new world record for the model at auction. Significantly, proceeds from the car's sale went to benefit the consignor's charity for the education of children. 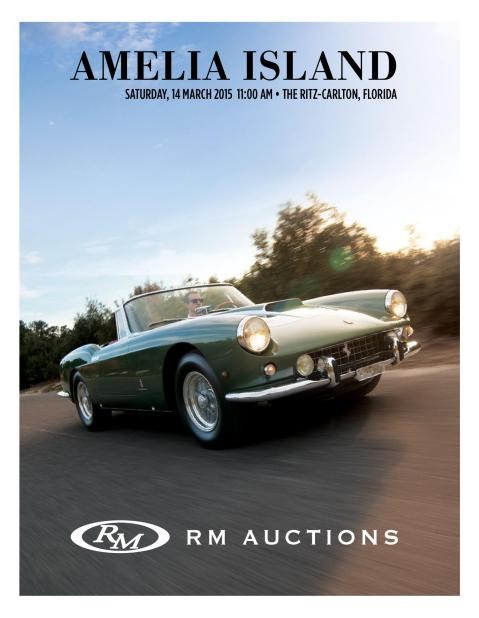 These terms and conditions are part of the agreement between the Consignor and Consignee regarding the consignment of the vehicle listed on the previous page (hereinafter referred to as the “vehicle”) to the auction sale described in this package (hereinafter referred to as the “sale”).
1. Services. Consignee agrees to provide auction services, a sale facility, clerks and support staff, and event advertising and promotion.

2. Commissions. In the event that the vehicle is sold, the Consignor agrees to pay sales commissions to the Consignee, as indicated in the Commissions Section on the previous page in this package.

3. Exclusivity. The Consignor grants to Consignee the exclusive right and authority to advertise and sell the vehicle for a period beginning with the date of this agreement and ending thirty (30) days following the sale. If during this period the vehicle should be sold or exchanged for money or other goods, or an introduction should be made that results in the subsequent sale or exchange of the vehicle to any third party, Consignor agrees to make immediate payment to the Consignee the sales commission described in the paragraph above. Consignee may retain possession of the vehicle or title until payment is made, in addition to any other legal remedies that may be available.

4. Title. The Consignor warrants that the Consignor is the sole and only owner of the vehicle and that the Consignor has full right and authority to sell the vehicle, including clear title and consent from any lienholders. The Consignor agrees to provide the buyer with a good, clear, and transferable title to the vehicle and to correct, at Consignor’s expense, any title defects and to pay any expenses associated with providing the buyer with a good, clear, and transferrable title according to the requirements of the state, province, or country where the buyer seeks to register the vehicle. Only negotiable U.S. titles are acceptable. Salvage titles or lien papers are not acceptable.

5. No Sale Titles. Titles for vehicles that are not sold will be returned by mail within thirty (30) days following the conclusion of the auction.

6. Payment. Payment is to be made directly from the buyer to the Consignor. However, as an accommodation to the Consignor, Consignee agrees to act as an intermediary between Consignor and the buyer to accept the purchase price from the buyer, transfer the vehicle to buyer, and deliver amounts due to Consignor under this Agreement. The Consignor agrees and consents to the sale of the vehicle according to the terms and conditions outlined herein and in the Purchase Confirmation, a copy of which is available upon request. Consignor authorizes Consignee to release the vehicle to the successful buyer and agrees to rely solely upon the buyer for payment. Consignor specifically releases Consignee from any and all legal obligation for collection costs, attorneys’ or legal fees, or any other expenses associated with the sale of the vehicle and the collection of payment. If, as a convenience to the Consignor, Consignee should issue payment to the Consignor on behalf of the buyer, the payment can be revoked, cancelled, or withheld at any time, at Consignee’s sole discretion, until payment has been received from the buyer. All or a portion of the sale proceeds may be withheld by Consignee to satisfy any debt or obligation owed by the Consignor to Consignee with respect to this or any other arrangement.

8. Non-Payment by Buyer. In the event of non-payment by the buyer, Consignee, in Consignee’s sole discretion, may cancel the sale and return the vehicle to the Consignor, enforce payment by the buyer, or take any other actions permitted by law. The Consignor agrees that in such an event, Consignee shall not, under any circumstances, be liable for any actual, incidental, or consequential damages caused by any breach or failure on the part of the buyer.

9. Representations. Consignor acknowledges that it is impossible to predict accurately the selling price or the time of sale for the vehicle, and accordingly, no such representations are made by Consignee.

10. Vehicle Description. Consignor agrees that Consignor accepts sole responsibility and liability for any representations made by Consignee based upon information supplied by the Consignor as to the character, features, condition, correctness, authenticity, or history of the vehicle, and to indemnify, defend, and hold Consignee harmless, as provided in this Agreement, from any claims that may be made with respect to any such representations.

12. Drivers. Consignor acknowledges and grants permission for Consignee and its employees and agents to drive or move the vehicle from time to time before, during, or after the sale. Consignor acknowledges that it is the Consignor’s responsibility to maintain sufficient insurance coverage to permit such driving, and Consignor specifically agrees to indemnify, defend, and hold Consignee harmless, as provided in this Agreement, from any liability that may result from such driving or movement of the vehicle.

13. Cancellation of Sale. Consignee may, at Consignee’s sole discretion and without any obligation to do so, cancel or rescind the sale of the vehicle if it determines or has reason to believe that the offer for sale has or may subject Consignee, the Consignor, or both to any liability, including, but not limited to, liabilities due to representations made by Consignor or due to insufficient title or authority. In the event of such cancelation, Consignee shall have the right to refund or credit the purchaser the full purchase price. In the event that Consignor has received all or part of the proceeds, Consignor agrees to repay such amounts. Consignor also agrees to accept return of the vehicle as full and complete settlement of this Agreement.

14. Liability. Consignor acknowledges that Consignee assumes no liability for any loss, theft, or damage of any kind to the vehicle, its contents, or components. Consignee maintains no insurance of any kind with respect to vehicles or items consigned to it for sale. The Consignor agrees to indemnify, defend, and hold Consignee and its employees and agents harmless, as provided in this Agreement, from any claims for injury or property loss or damage arising out of the consignment or sale of the vehicle.

15. Odometer Statement. Consignor agrees to provide a duly executed odometer statement on or before the first day of the sale and to accept sole responsibility for the accuracy or inaccuracy of such statement.

16. Reserve Price. The reserve price bid noted on the reserve of this contract is the lowest bid acceptable to Consignor. Reserve bid may be lowered at any time by Consignor, either verbally or in writing, but it may not be raised. Reserve bid does not include commissions to Consignee. Consignee reserves the right to sell the vehicle at a price below the agreed verbal or written reserve price, provided that Consignor receives the same net proceeds as Consignor would have received had the reserve bid been met. If no reserve, indicate clearly by writing “NONE” in the space provided.

17. Withdrawn Lots. Consignor acknowledges that Consignee has incurred and will incur significant costs and expenses in fulfilling its obligations under this Agreement. Consignor further acknowledges that its withdrawal of the vehicle from the auction constitutes a breach of this Agreement, and the damages for which would be difficult and impractical to determine. As a result, the parties agree that the amounts payable, as set forth in this paragraph, constitute reasonable liquidated damages. Should Consignor choose to remove its vehicle following the signing of this Agreement, the Consignor agrees to pay the Consignee twenty percent (20%) of the reserve for vehicles listed with a reserve or twenty percent (20%) of the low estimate for vehicles listed without a reserve or, if neither a reserve or a low estimate is listed, then twenty percent (20%) of the fair market value of the vehicle.

18. Consignor shall indemnify, defend, and hold harmless Consignee, its shareholders, officers, directors, employees, agents, and auctioneers from any and all loss, costs, damage, expense, or liability, including, without limitation, court costs and attorneys’ fees arising out of or in any way related to Consignor’s consignment of the vehicle to Consignee under this Agreement, except where such liability relates solely to Consignee’s gross negligence or willful misconduct.

19. In the event either party brings action against the other arising from or relating to the provisions of this Agreement, the prevailing party, as determined by the court, shall be entitled to recover its reasonable attorneys’ fees and costs. The law of the state in which the auction is held shall govern the provisions of this Agreement. Jurisdiction for any action brought shall lie exclusively in a court of competent jurisdiction in the jurisdictional district in which Vallejo, California, is located.

20. Title may be retained by Consignee at Consignee’s sole discretion until such time as payment in full has been received, including clearing of funds, if applicable.

21. Sale entry fee is non-refundable and is not credited towards sales commission.

23. Except as shall otherwise be expressly agreed to in writing by Consignee, Consignor acknowledges and agrees that neither Consignor nor any person acting on Consignee’s behalf will bid on any vehicle consigned by Consignor to Consignee.