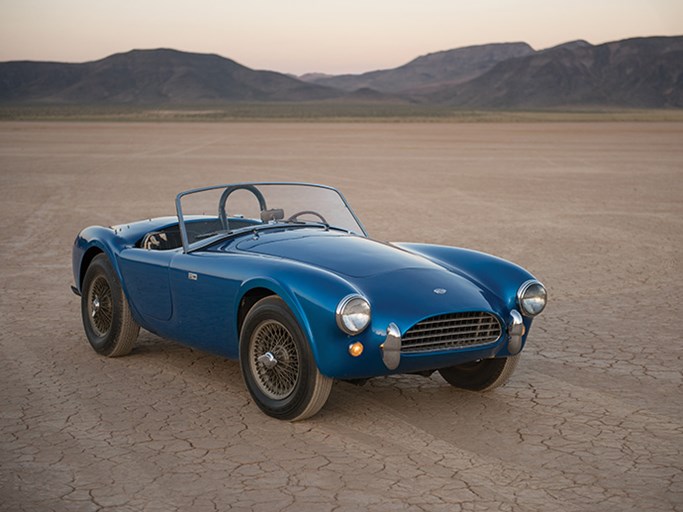 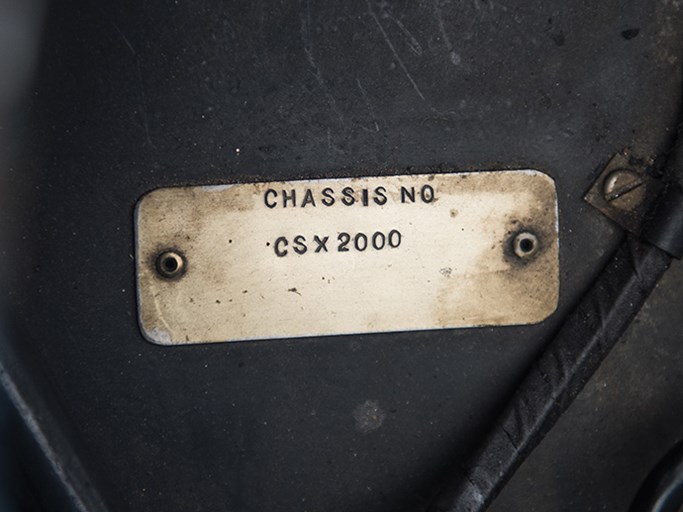 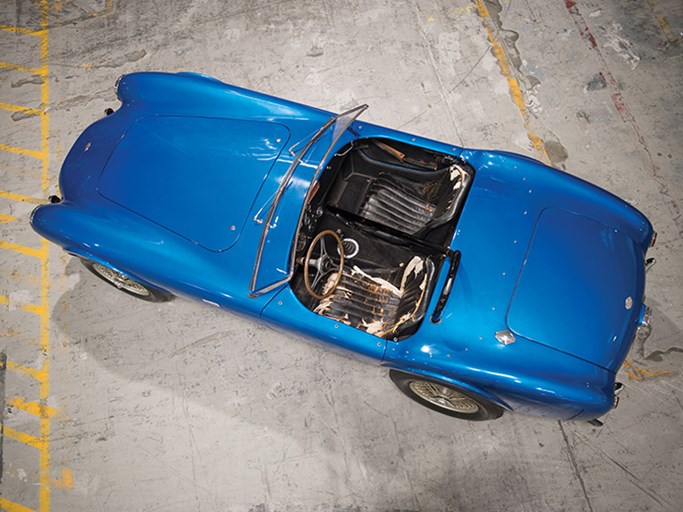 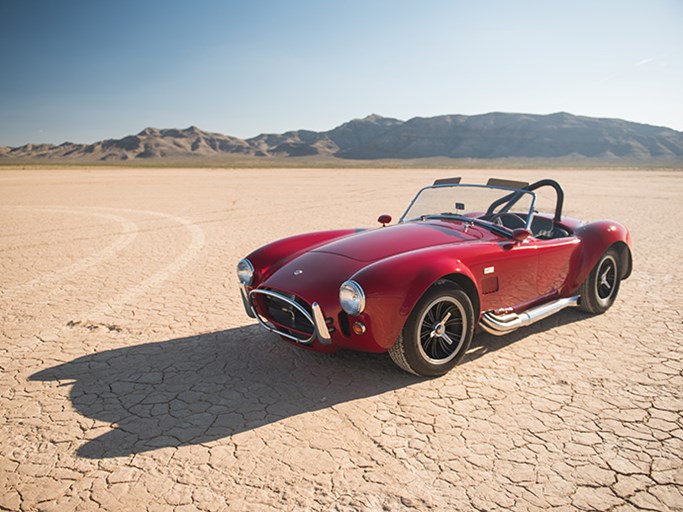 The 1965 Shelby 427 Cobra, CSX 3178, will be presented at RM Monterey on behalf of the Carroll Shelby Foundation

BLENHEIM, Ontario (June 29, 2016) – CSX 2000, the most important modern American car—period—and a vehicle that revolutionized the automotive world, will cross the auction block this summer as part of RM Sotheby’s flagship Monterey sale, August 19–20, in California. Offered for sale by the Carroll Hall Shelby Trust, the iconic Cobra was constructed and kept from new by the legendary Carroll Shelby and never left his ownership. A truly unprecedented event, its presentation in Monterey will command the attention of the global collector community.

The original Shelby Cobra, CSX 2000 marked the start of Carroll Shelby’s incredible automotive legacy. The car was born in 1962 in a small garage in Santa Fe Springs, California, after Carroll Shelby, joined by a handful of hot-rodders, shoehorned Ford’s new, lightweight, high revving 260-cubic inch V-8 into a modified AC Ace chassis. The result—a fierce sports car armed with incredible performance in a lithe, stylish package—became the cornerstone on which the great Carroll Shelby set the world on fire and forever changed the course of automotive history.
“When it comes to American sports cars, CSX 2000 is without peers. Its historical significance and impact on the global sports car scene cannot be overstated,” says Shelby Myers, Car Specialist, RM Sotheby’s. “In the automotive world, CSX 2000 was the shot heard ‘round the world; it revolutionized not only American racing, but the greater auto industry as a whole. Had Carroll Shelby never decided to squeeze that high performance V-8 into its engine bay, there would be no Cobra and certainly no Shelby American, nor GT40, nor the others that followed. The automotive landscape and sports cars as we know them would be very different.”
CSX 2000 played a multitude of roles during its early days. As the only one of its kind, it was not only used in testing and development, but also driven by the motoring press, and shown in cities across the U.S. to drum up interest and sales for the fledgling company, Shelby American, Inc. During this time, thanks to clever marketing, Shelby also convinced the public that Cobra production was in full swing; the car was repainted a different color for almost every appearance to give the impression that Shelby had more than one car in their inventory. In reality, it remained the first and only Cobra for seven months. CSX 2000’s technical specifications were also extraordinary. A 1962 road test by Road & Track revealed a 0–60 mph sprint in just 4.2 seconds, a standing quarter-mile run in 13.8 seconds at 112 mph, and a top speed of 153 mph.
Throughout its life, even after Cobra production ended, CSX 2000 never shied away from public view, nor did it change ownership. It has been featured in countless books and magazines, continually driven and critiqued in road tests, and a frequent motor show starlet. It was even used for a period of time by employees at the Carroll Shelby School of High Performance Driving. To commemorate the 50th anniversary of the Shelby Cobra in 2012, CSX 2000 took center stage at some of the country’s most prominent events that year—the Pebble Beach Concours d’Elegance and the Rolex Monterey Motorsports Reunion included. Since then, it has been a prominent and much-admired display at the Shelby Heritage Center in Las Vegas, Nevada.
“Carroll and Rob Myers discussed Cobra #1 many times, and they were good friends. Their agreement that Rob would offer the car for Carroll’s Trust, after he was gone, was a very emotional one for both of them,” states Joe Conway, Co-Trustee with Neil Cummings of the Carroll Hall Shelby Trust. “Neil Cummings and I are now simply carrying out Carroll’s wishes, with no disrespect meant to the other individuals who meant so much to Carroll and did so much for his business and his Foundation over the years.”
Shelby Myers, on behalf of RM Sotheby’s adds, “We feel both incredibly honored and privileged to have been entrusted with CSX 2000’s sale by the Carroll Hall Shelby Trust. It is, without exception, the single most important and history-rewriting sports car ever offered at auction, after over 50 years of ownership and without ever leaving the care of its founding father. Supremely original and with extraordinary history, we’re beyond thrilled to celebrate and present this national treasure in Monterey this August.”
As part of a fantastic showcase celebrating 50 years of Shelby heritage, RM Sotheby’s Monterey sale will also offer the 1965 Shelby 427 Cobra, CSX 3178, on behalf of the Carroll Shelby Foundation. Another car in single-ownership with Carroll Shelby from new, CSX 3178 was fitted with a rare automatic transmission for his personal driving use. Also set for the RM Monterey podium, a 1999 Shelby Series I Roadster, CSX 5064, finished in Centennial Silver with Candy Apple Blue stripes, and sporting only 2,637 miles, and Carroll Shelby’s personal 1986 Dodge Shelby GLHS Omni, GLHS 086, showing just 7,733 miles, both of which are offered from the Carroll Hall Shelby Trust.
A tradition spanning more than 30 years, RM Sotheby’s annual Monterey auction, held during the Pebble Beach Concours d’Elegance week, returns to the Portola Hotel & Spa and Monterey Conference Center, August 19-20. In total, some 100 blue-chip automobiles are expected to go under the gavel during the two-evening sale. For further event information and to view a frequently updated list of entries, please visit www.rmsothebys.com or call +1 310 559 4575.
FOR MORE NEWS FROM RM SOTHEBY’S
Visit: www.rmsothebys.com
Follow: www.twitter.com/rmsothebys
Join: www.facebook.com/rmsothebys
Watch: www.youtube.com/rmauctionsinc
About RM Sotheby’s
RM Sotheby’s (formerly RM Auctions) is the world's largest auction house for investment-quality automobiles. With 35 years’ experience in the collector car industry, RM's vertically integrated range of services, from private treaty sales and auctions to estate planning, and financial services, coupled with an expert team of car specialists and an international footprint, provide an unsurpassed level of service to the global collector car market. In February 2015, RM formed a strategic partnership with Sotheby’s, uniting the two companies for the full calendar of future automobile auctions. For further information, visit www.rmsothebys.com.
Media Information
High res images are available for downloading for media use from the RM Sotheby’s website.  If you are interested in attending an RM Sotheby’s event as a member of the media, please visit www.rmsothebys.com/credentials to register for media credentials.  A video of CSX 2000 in motion with historical commentary is available for viewing here: http://bit.ly/293ItUG.
{{controller.successMessage}}
Close