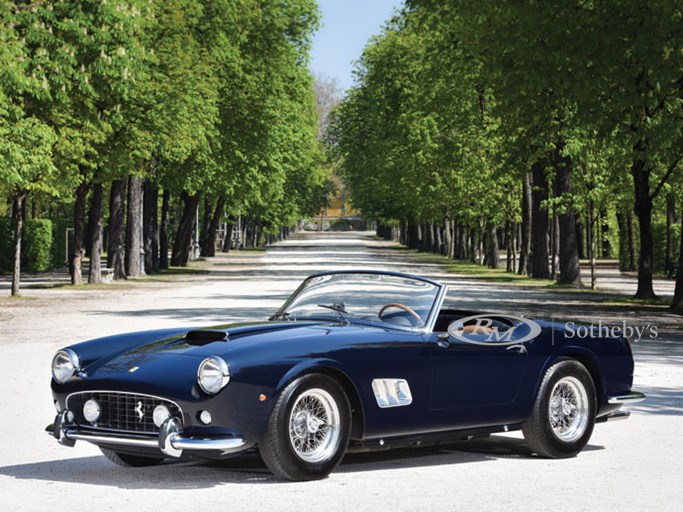 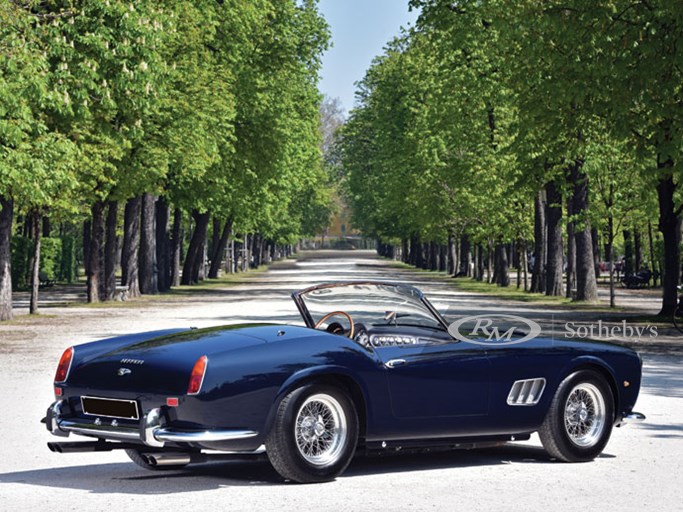 LONDON (23 April, 2015) – With only four weeks to go until RM Sotheby’s incredible Villa Erba auction during the Concorso d’Eleganza Villa d’Este weekend, it is with great excitement that we announce the consignment of a stunning 1961 Ferrari 250 GT SWB California Spider, chassis 2505 GT. Unquestionably one of the most iconic cars of all time, and certainly one of the most collectible Ferraris ever made, the California Spider leads a superlative roster of 37 of the world’s finest and most desirable cars at the 23 May event. The offering includes a remarkable collection of Maranello classics, along with two vintage Riva boats, perfectly matched to the event’s Lake Como setting in Northern Italy.

“The words ‘California Spider’ are synonymous with ‘La Dolce Vita’ and the finest motoring experience that can be imagined,” says Peter Wallman, Car Specialist, RM Sotheby’s. “Perhaps the most beautiful convertible car ever made, and featuring the powerful Colombo designed 3.0-litre V-12 engine, this spacious and versatile two-seat sports car with race car performance is the ultimate road going Ferrari of all time.”

The California Spider on offer at the upcoming RM sale, chassis no. 2505 GT, is one of only 16 open-headlight versions, and the 18th of just 56 SWB California Spiders produced.  Unlike most examples that were delivered to the United States, 2505 GT was a European delivery car, sold new by the official dealership in Milan. It remained in Italy up until 1974 when it was sold to a Swiss collector, who kept the car for the next 20 years.  In 2007, its current owner returned the car to Maranello for a full, concours-quality restoration by Ferrari Classiche. As part of this process, all mechanicals were fully re-built and it was refinished in its stylish shade of Blu Scuro over a Pelle Beige interior. The California Spider went on to appear at the Ferrari Challenge World Finals in Valencia in 2010, where it was driven on the parade lap by none other than Ferrari President, Luca di Montezemolo. It was later displayed at the Cavallino Classic where it won the prestigious Ferrari Classiche Cup for being the finest Classiche certified automobile entered for judging. It also received a ‘Mention of Honour’ at the 2013 Concorso d’Eleganza Villa d’Este and has been displayed at the famed Museo Ferrari in Maranello.  Presented in spectacular condition and with Ferrari Classiche certification, 2505 GT remains ready and eligible for display at all of the world’s most prestigious concours events, and as a European delivery example, will be a rare prize for any serious collector (Estimate available upon request).

For Ferraristi, the California Spider leads an exceptional roster of 17 examples from the Maranello marque slated for RM’s Villa Erba podium.  For those with an appreciation for the purity of the design of early Ferraris, the sale includes a lovely 1950 Ferrari 195 Inter Berlinetta, chassis no. 0089/S. Shown at the Brussels Motor Show in Belgium in 1951 before being delivered new to Comptoir Automobiles Richard SA in Brussels, 0089/S was later raced in the 1957 Liège–Rome–Liège Rally. By the 1960s, the car had been sold to the UK where it has resided ever since. The subject of a comprehensive restoration by marque specialists in 2003, the Ferrari certified 0089/S has since competed in the Mille Miglia.  As the third of only a few Ferraris bodied by Carrozzeria Ghia, it represents one of the most important remaining examples of an early coachbuilt road-going Ferrari in existence (Est. €1.125.000 - €1.650.000).

If a more recent example of Maranello’s ultimate performance engineering is on your wish list, the auction also features a rare offering of the marque’s ultimate modern-era ‘hypercars’. Often referred to as the ‘full-house’ of Ferrari supercars, RM Sotheby’s Lake Como sale will present a 1985 288 GTO, a 1991 F40, a 1996 F50 and a 2002 Enzo. Boasting in excess of 2000 bhp between them, these cars represent the pinnacle of supercar engineering in their respective eras, and form an important part of Ferrari’s unsurpassed global reputation for making the fastest and most accomplished road cars ever conceived.   Additional late-model Ferraris set for the auction stage include: a breath-taking Grigio Silverstone over Cuoio 2006 Ferrari 575 Superamerica, in single ownership and showing just 700 kilometres from new (Est. €370.000 - €450.000); and, a 2007 Ferrari 599 GTB HGTE, one of just 10 manual-transmission examples delivered to Europe, and perhaps the only six-speed example upgraded to the HGTE specifications (Est. €225.000 -€300.000).

For further information on RM Sotheby’s sale during the Concorso d’Eleganza Villa d’Este or to view the complete digital catalogue, please visit www.rmauctions.com or call +44 (0) 20 7851 7070.