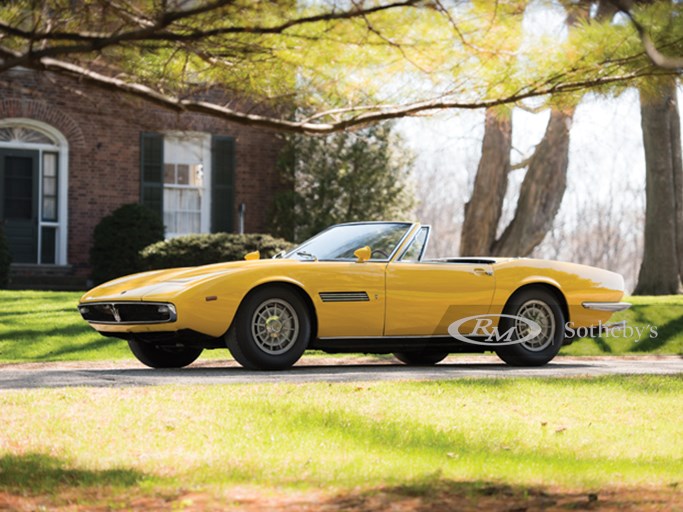 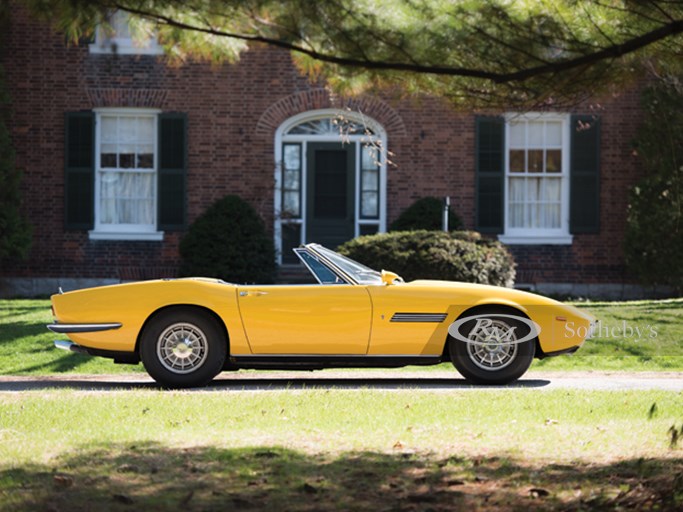 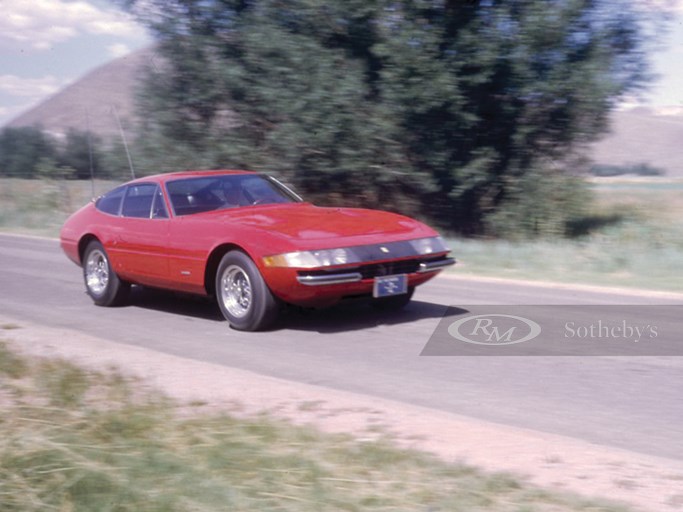 BLENHEIM, Ontario (May 12, 2015) – A striking pair of Italian-designed and built prototypes will take center stage in Monterey this summer as RM Sotheby’s returns to California for its flagship sale during the Pebble Beach Concours d’Elegance weekend. For Maserati aficionados, this pairing includes arguably the most significant Ghibli in existence, while Ferraristi will be presented with an exclusive opportunity to acquire the original U.S.-specification Daytona Prototype. The two prototypes are among 150 blue-chip collector cars slated for the RM Sotheby’s sale, August 14-15.

The 1968 Maserati Ghibli 4.7 Spyder Prototype, chassis AM115/S 1001, is well-documented as the first Ghibli Spyder ever produced, and the first example ever shown to the public, as confirmed by Maserati Classiche. Striking in bright Giallo with a Testa di moro interior – the same color combination it wears today – and featuring sublime styling by Ghia, 1001 was shown at the 1968 Turin and 1969 Geneva Auto Shows to rave reviews. As the prototype design, it displays several unique differences from the production Spyder that followed; among the most noticeable, a slightly longer boot lid, and slight recesses in the door panels where the handles are mounted.

Following the conclusion of Maserati’s testing and development, 1001 was sold to its first private owner in 1969, who allegedly drove the car frequently around Italy before the Spyder exchanged hands in 1975 and was imported into the United States. In 1986, with 41,100 miles on the clock, 1001 went into storage, where it remained for nearly thirty years before being purchased by its current custodian.  Upon acquiring the car, the vendor commissioned a full service by a marque specialist, who discovered the car had been properly stored, and as a result, it required very little effort to return the Spyder to life.

Chassis no. 1001’s first public outing in nearly three decades was at the 2014 Concours d’Elegance of America at St. John’s in Michigan, where it received the Debut Award for most important concours debut. Later that year, the Ghibli Spyder attended the Hilton Head Island Concours d’Elegance where it received a Palmetto Award in the highly competitive Maserati class, which celebrated the 100th anniversary of the marque. Offered fresh to the market, 1001 is expected to fetch $1,200,000 - $1,800,000 when it crosses the RM Monterey podium in August.

“A piece of Maserati History, 1001 is undoubtedly the most significant Ghibli in existence,” says Ian Kelleher, Managing Director, RM Sotheby’s West Coast Division. “Not only does it boast incredible historical value as the prototype used by the factory to develop the production Ghibli Spyder, but it also offers incredible looks, fantastic performance – thanks to its potent 4.7-liter V-8 - and wonderful driving dynamics. We’re thrilled to have been entrusted with the car’s sale by its gentleman owner. For the astute Maserati collector, its offering represents a singular opportunity to acquire a very significant automobile – the first Ghibli Spyder.”

RM Sotheby’s Monterey sale will also lift the gavel on the original U.S.-specification Daytona Prototype, chassis 13361. Like the Maserati, this 1970 Ferrari 365 GTB/4 Daytona Berlinetta also holds a special place in automotive history; it is the first example of the American-specification Daytona, which, most notably, featured the Perspex-covered headlamps as used in Europe. Completed at the Maranello factory in April 1970, 13361 was ordered new by William Harrah’s Modern Classic Motors in Reno, Nevada, then a principal importer of Ferraris in the western United States. In addition to being the prototype of the U.S.-version Daytona, this 365 GTB/4 also possesses a unique ownership provenance, as it is believed to have been retained by Mr. Harrah as a personal car, associating it with one of the most heralded names in the collector car niche. It’s provenance is further bolstered by the fact that it was utilized in Road & Track’s initial test-drive review of the Daytona model, which ran in the magazine’s October 1970 issue. With a well-documented chain of ownership, 13361 is offered for auction following a recent, concours-quality restoration that saw the car return to its original Plexiglas headlight specification (Est. $900,000 - $1,200,000).

“From an aesthetic perspective, the Ferrari Daytona was an instant styling icon, combining the sharp edges of 1970s along with the curves of the 1960s. Under its hood, its massive V-12 engine rendered it the most powerful road going Ferrari of its time; as an exhilarating high-speed, high-performance car, it embodied everything about Ferrari that a driving enthusiast cherishes,” says Shelby Myers, Car Specialist, RM Sotheby’s. “Chassis 13361 is perhaps the most compelling of its breed. Not only is it the original U.S.-specification Daytona prototype, but it is freshly restored, matching numbers, and boasts a truly outstanding provenance that includes ownership by William Harrah, along with the prestige of being a Road & Track cover car.”

An institution spanning more than 25 years, RM Sotheby’s flagship Monterey auction returns to the Portola Hotel & Spa and Monterey Conference Center, August 14-15. The pinnacle of collector car sales, in 2014 the RM event set a new benchmark for a collector car auction, generating a remarkable $143.4 million to become the highest grossing collector car auction of all time. This year’s event is set to continue the company’s strong track record in California, lifting the gavel on a magnificent roster of 150 blue-chip automobiles.

For further information or to view a frequently updated list of entries, please visit www.rmauctions.com or call +1 519 352 4575.

About RM Sotheby’s
RM Sotheby’s (formerly RM Auctions) is the world's largest auction house for investment-quality automobiles. With 35 years’ experience in the collector car industry, RM's vertically integrated range of services, from private treaty sales and auctions to estate planning, and financial services, coupled with an expert team of car specialists and an international footprint, provide an unsurpassed level of service to the global collector car market. RM proudly holds four of the top ten all-time records for the most valuable motor cars sold at auction.  In February 2015, RM formed a strategic partnership with Sotheby’s, uniting the two companies for the full calendar of future automobile auctions. For further information, visit www.rmauctions.com.

Hi-res Images are available upon request