RM SOTHEBY’S TO OFFER THE EX-FANGIO, EX-WORKS FERRARI 290 MM IN NEW YORK CITY: ONE OF THE WORLD’S MOST HISTORIC AND VALUABLE SPORTS RACING CARS 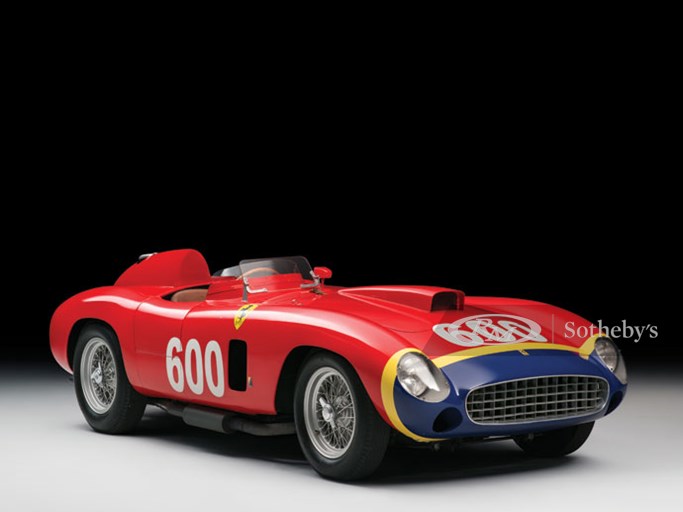 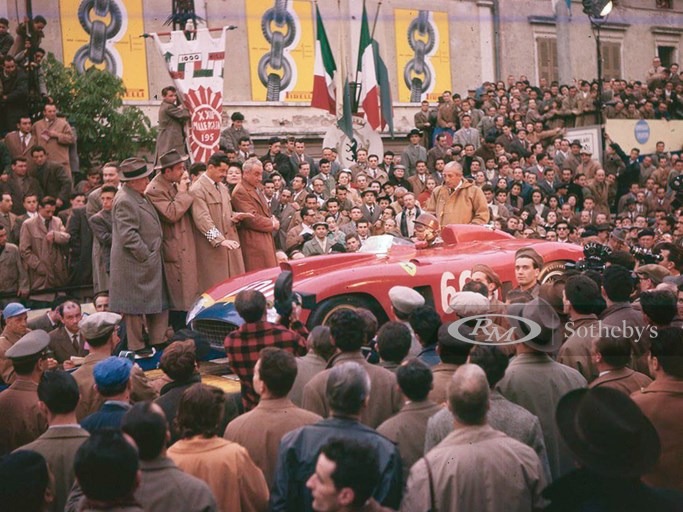 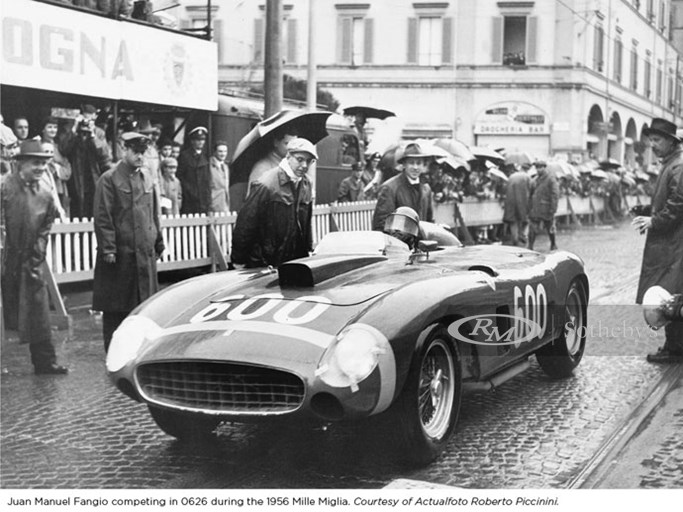 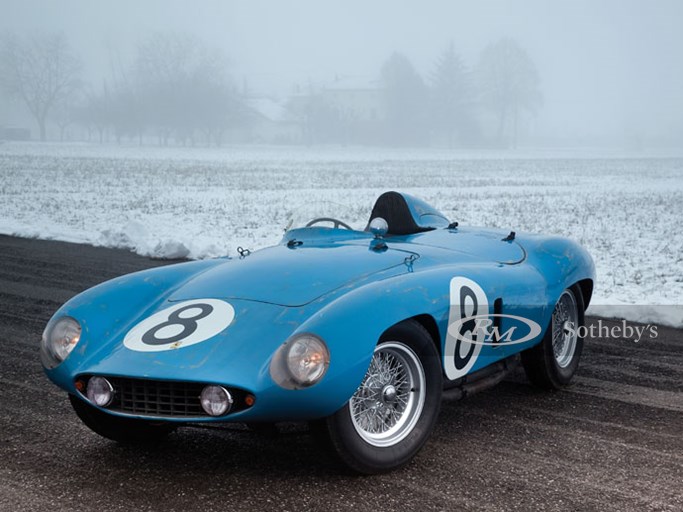 ·        Built for racing legend and five-time World Champion Juan Manuel Fangio to compete in the 1956 Mille Miglia, 0626 was driven by the ‘Who’s Who’ of motorsport in period

NEW YORK, New York (19 October 2015) – In the history of motor racing, it is hard to imagine two names with greater stature than Ferrari and Juan Manuel Fangio, the enigmatic five-time Formula One World Champion. To find a car which so closely connects these two great motor racing legends is the Holy Grail for car collectors and aficionados the world over. RM Sotheby’s is thrilled to announce it will offer one such automobile, the ex-Works 1956 Ferrari 290 MM, chassis 0626, at its exclusive Driven by Disruption sale, December 10 in New York City. Raced not only by Fangio but also future World Champion Phil Hill, along with numerous other celebrated Ferrari Formula One drivers, the featured Ferrari is undoubtedly one of the greatest, most original, and most valuable cars ever offered at public auction.

Chassis 0626 was specifically built by the Ferrari factory for Juan Manuel Fangio to drive in the 1956 Mille Miglia. Certainly the best driver of his era, and classed by many as the greatest driver who ever lived, Fangio raced 0626 in the 1000-mile event single-handedly, finishing an impressive 4th overall in a race hindered by appalling conditions. Dressed in the unique factory Argentinian color scheme for Fangio, the car featured a totally new 3.5-liter V-12 engine and was one of only four 290 MMs to be built. Furthermore, it was one of the first Ferraris raced in Europe by Phil Hill and also heralded the beginning of Wolfgang von Trips’ Ferrari-driving career. It was famously piloted to victory in the 1957 Buenos Aires 1000 KM by Eugenio Castellotti, Luigi Musso, and Masten Gregory. During its illustrious career, 0626 was also campaigned by other legendary names including Alfonso de Portago, Peter Collins, Olivier Gendebien, and Joakim Bonnier.

“It’s hard to know where to start when describing just how important this 290 MM is,” says Peter Wallman, Car Specialist, RM Sotheby’s. “Driven by the greatest drivers of the 1950s and built for possibly THE greatest driver in history, this is a car with which Enzo Ferrari was personally involved and is a fundamental part of Ferrari folklore. Its originality, coupled with its extraordinary provenance and history, which are truly second to none, can only lead you to conclude that it is one of the most desirable and valuable cars that will ever come to the open market.”

Combining rarity, powerful mechanical specification, important racing history, and purposeful good looks, 0626 is the ultimate 1950s factory sports racing car. An integral part of Ferrari’s 1956 and 1957 Manufacturer’s World Championship-winning teams, it participated in a roll-call of classic races during its period racing career, a selection of which are outlined below.

In 1957, 0626 was sold through Luigi Chinetti to enthusiast Temple Buell, a friend of Enzo Ferrari, who continued to campaign the car around the world with Masten Gregory and Jo Bonnier behind the wheel. It then passed through the hands of two enthusiastic Ferrari team owners and continued to be raced up to 1964, eventually making its way into a private U.S. collection.

Following the end of its racing career, 0626 remained in the United States before it was acquired by renowned collector Pierre Bardinon, remaining in his incredible Mas du Clos Collection for almost 34 years before being purchased by its current custodian. It has since been presented at numerous prestigious events, including the 1987 Cartier “Hommage to Ferrari” exhibition and the UK’s Concours of Elegance, as well as participating in the Mille Miglia Storica. Ferrari Classiche certified, it remains the best of all the four examples built, having never fallen victim to the crucible of motorsport, and retaining its original chassis, matching-numbers engine, gearbox, and body. It comes to auction accompanied by an extensive history file and is eligible for all major historic events, including its 60th anniversary at the Mille Miglia next year (Estimate available upon request).

Finished in French Blu and equipped with a Lampredi four-cylinder engine with dual overhead camshafts, 0564MD/0424MD was sold new to French gentleman driver Mr. Yves Dupont in 1955 and successfully campaigned in period. It made its racing debut at the 12 heures de Hyères in May 1955 and later entered the famous and demanding Liège-Rome-Liège. Following the end of the 1955 season, 0564MD/0424MD was returned to the factory to be refurbished; it was never picked up by its owner and instead remained there for the next two decades, during which time it was oversprayed red by the factory and displayed at the Monza Museum. In 1975, the factory sold the car to French enthusiast Jean-Francois du Montant. Over the ensuing years, 0564MD/0424MD passed through the hands of a number of respected, enthusiast owners.

In 2008, the then-owner of 0564MD/0424MD arranged for a Padova-based body shop to delicately remove the red paint to reveal the original French Blu paint underneath, a project that took three months to complete. The car still wears its original French Blu paint today. In recent years, 0564MD/0424 MD has participated in a number of historic events, including multiple appearances at the Mille Miglia Storica, as well as at various concours events including Salon Privé. Extraordinarily original, it comes to auction following a fresh engine rebuild and complete with Ferrari Classiche certification. It is eligible to participate in all key historic events (Est. $5,000,000 - $7,000,000).

RM Sotheby's Driven by Disruption event rounds out an already record year for the international auction house. The upcoming New York sale, to be held at Sotheby’s Manhattan headquarters on December 10, will feature a carefully curated selection of some 30 creatively-styled and pioneering motor cars, along with select automobilia. Each of the auction vehicles have been handpicked by RM specialists to showcase the extremes of motoring history and the molds that were broken by engineers and designers in pushing the automotive envelope.  As a prelude to the sale, an exclusive six-day exhibition will open over the weekend of December 5 in Sotheby’s 10th floor galleries.

For further information, or to view a frequently updated list of entries, please visit www.rmsothebys.com or call  +1 519 352 4575.

RM Sotheby’s (formerly RM Auctions) is the world's largest auction house for investment-quality automobiles. With 35 years’ experience in the collector car industry, RM's vertically integrated range of services, from private treaty sales and auctions to estate planning and financial services, coupled with an expert team of car specialists and an international footprint, provide an unsurpassed level of service to the global collector car market. As a company, RM Sotheby’s has established numerous auction benchmarks, including the current record for the highest-grossing collector car auction of all time, with $172.9 million in sales at its 2015 Monterey event. In February this year, RM formed a strategic partnership with Sotheby’s, uniting the two companies for the full calendar of future automobile auctions. For further information, visit www.rmsothebys.com.