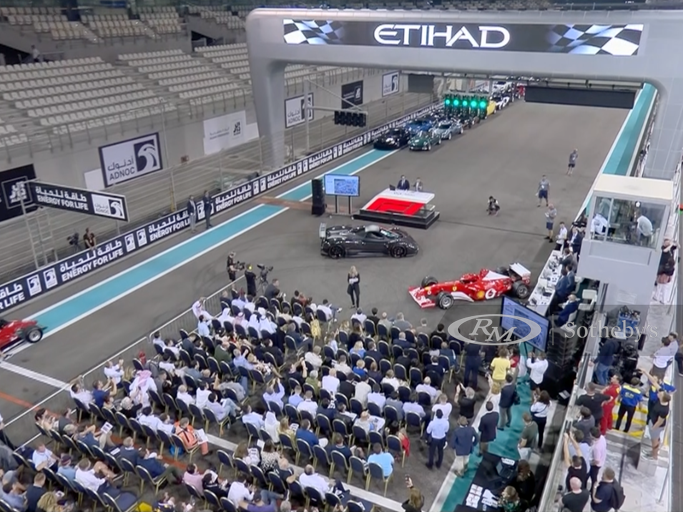 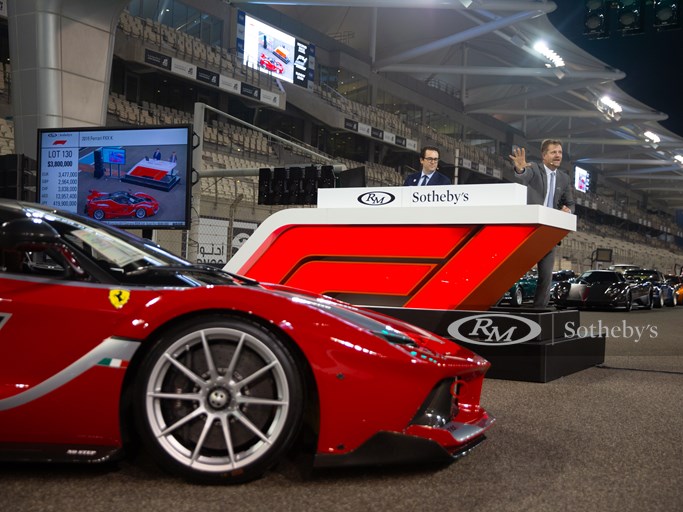 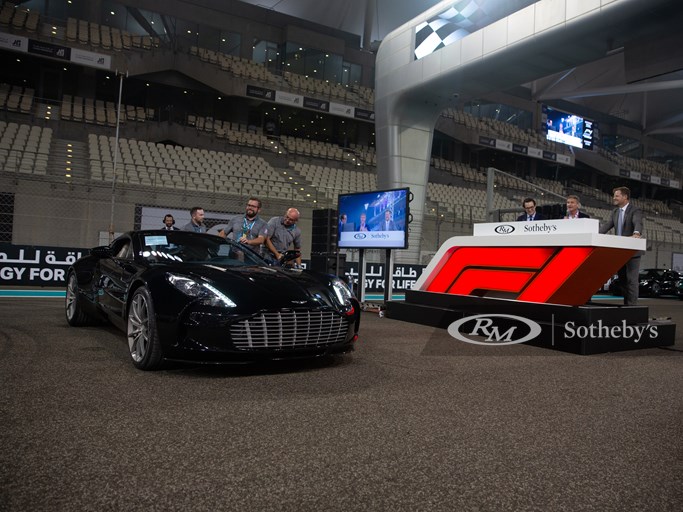 ABU DHABI (2 December 2019) – On Saturday night (30 November) at the season-ending FORMULA 1® ETIHAD AIRWAYS ABU DHABI GRAND PRIX 2019, RM Sotheby’s made history with the first-ever international collector car auction to be hosted in the Emirate and the first auction to ever take place at an F1® Grand Prix™.

Collectors, enthusiasts and F1® fans alike filled what was perhaps the most exciting collector car auction room to date—the Formula 1® starting grid at Yas Marina Circuit. Much like a synchronized F1 pit crew, the RM Sotheby’s, Formula 1, and Yas Marina Circuit teams set up the auction in less than 1.5 hours following F1 qualifying laps that evening. In collaboration with F1, RM Sotheby’s presented an exceptional lineup of 40 blue-chip collector cars, ranging from victorious Grand Prix racing machines to iconic sports cars and the most-sought after low-mileage modern hypercars, generating total sales of $31.3 million USD across the two hours of auction action. The offering reflected the diverse collecting interests of the region and resulted in record-setting benchmark results across all categories. Bidders represented a wide range of 28 countries, with one third from the Middle East region and an overall 40 percent representing first-time RM Sotheby’s bidders.

“After many months of planning and execution, Saturday night’s sale represented the ultimate collaboration between two world-class organizations in the production of a truly ground-breaking auction and lifestyle event. To be hammering down some of the most desirable cars in Formula 1 racing history on the starting grid of the 2019 Etihad Airways Abu Dhabi Grand Prix was a benchmark moment for RM Sotheby’s as it confirmed the launch of a successful and mutually rewarding partnership alongside Formula 1. There was an incredible and tangible energy that no doubt owed its origin to the amazing community surrounding Formula 1 racing and the incomparable exclusivity of the Paddock Club experience that many of our clients came to know for the first time. Joining forces with Yas Marina Circuit and Abu Dhabi Motorsport Management for this inaugural auction proved an excellent choice. We couldn’t have collaborated with a more dedicated and professional team on this first-of-its-kind event.”

“As the pre-eminent global auction house for the world’s most desirable motor cars, our first foray into the Middle East fully exceeded my expectations in so many positive ways. Our existing regionally-based clientele was tremendous in supporting the auction and we were honored by the reception we received in the Fanzone with our exhibition. To be able to highlight the selection of cars sourced and consigned from around the world for the inaugural auction to the tens of thousands of enthusiasts that visited us onsite was outstanding and something that has never before been done in our industry. As one of the most recognizable and respected global brands, Formula 1 made for the perfect partner to the RM Sotheby’s brand as we offered clients a new experience at the intersection of motorsport and the collector car hobby that will continue into the 2020 auction calendar.”

“At Formula 1 we are all delighted with the success of the auction on Saturday and the dynamic new partnership with RM Sotheby’s.  It was a fantastic setting on the grid of the Yas Marina Circuit on the eve of the final grand prix of the year.  The atmosphere was electric.  It was also a perfect place to showcase and sell such spectacular cars and after so many months of planning it was great to see it all fall into place in such a seamless fashion.”

The auction night was led by the devilish 2017 Pagani Zonda Aether, a rare one-off hypercar fitted with an ultra-desirable six-speed manual transmission and a host of unique features. The Zonda Aether achieved a final $6,812,000 following a lengthy bidding competition, well-surpassing the current record for the model at auction.

Next up was Michael Schumacher’s much-buzzed-about championship-winning 2002 Ferrari F2002. Victorious in three Grands Prix™ in the 2002 season, the car also secured Schumacher his fifth Drivers’ World Championship title. Drawing plenty of attention ahead of the sale and during the preview, the legendary racer sold for a final $6,643,750, making it the second most valuable Formula 1 car ever sold at auction, second only to the Schumacher Ferrari F2001 which RM Sotheby’s sold for $7,500,000 in 2017. A portion of proceeds from the car’s sale will benefit the Schumacher family’s Keep Fighting Foundation.

It was two more Ferraris that stole the show on Saturday night, with a 2015 Ferrari FXX K, Maranello’s most potent track-only, limited production model and the first of its kind ever offered at auction, selling for $4,281,250 to set a new benchmark for the model. Another Scuderia Ferrari F1 racer, a pivotal 1982 Ferrari 126 C2 raced to victory by Patrick Tambay at the 1982 German Grand Prix and driven to pole position and 3rd place by Mario Andretti at the Italian Grand Prix, was the talk of the Paddock before it crossed the auction block on Saturday. Presented as the sole surviving example of the model, the 126 C2 brought a final $2,143,750 to applause from the packed crowd on the grid.

Additional highlights included a striking 2011 Aston Martin One-77, which was driven across the block by former Formula One racing driver and current commentator, David Coulthard. Selling for a final $1,440,625, all proceeds from the sale of the car will be donated by consignor Markus Jebsen on behalf of Auction4Wildlife to benefit African Parks. Representing the classic cars on offer, an iconic 1956 Mercedes-Benz 300 SL Gullwing with rare optional sport suspension and the NSL engine was coveted on the night, selling for a final $1,581,250. Finally, one of the quirkier cars in the sale, a one-off 1996 Zagato Raptor built in conjunction with Lamborghini as a modern coach-built concept, sold for a final $1,086,250.

Two memorabilia lots complemented the motor car offering, led by a Formula 1 Slot Car Racetrack, which was signed by all of the current Formula 1 drivers in the Yas Marina Circuit Paddock on Friday night ahead of the sale, including now six time FIA Formula 1® World Champion, Lewis Hamilton. Sold for a final $48,000, proceeds from the slot track will benefit the Reaching the Last Mike Fund, inspired by His Highness Sheikh Mohamed bin Zayed Al Nahyan.

The Abu Dhabi auction concludes RM Sotheby’s live auction events for 2019. The auction house will continue to offer Online Only sales on both rmsothebys.com and sothebys.com through the end of the year, beginning with its Online Only: Formula 1® Memorabilia auction, for which results will be available on 3 December. The sale features 103 lots of collectibles, ranging from large-scale handmade models to racing helmets and suits, with an emphasis on the late 1980s, and early 1990s and 2000s, as well as the legendary achievements of FIA Formula One World Championship drivers, Ayrton Senna and Michael Schumacher.

Next up, RM Sotheby’s will collaborate with its partners at Sotheby’s and with Rolls-Royce to present a bespoke Rolls-Royce Phantom. The commissioned Phantom marks Rolls-Royce’s 115th Anniversary and will be presented on Sothebys.com, with bidding open from 4-13 December and with proceeds benefitting RED’s fight to end AIDS. Rolls-Royce has partnered with acclaimed contemporary artist Mickalene Thomas, who will create a unique artwork and custom wrap using the Phantom as her canvas, for the winning bidder. To learn more, visit sothebys.com.

RM Sotheby’s is still accepting limited consignments for both its 2020 Arizona (16-17 January) and Paris (5 February) auctions. Additional information on upcoming events is available at rmsothebys.com.