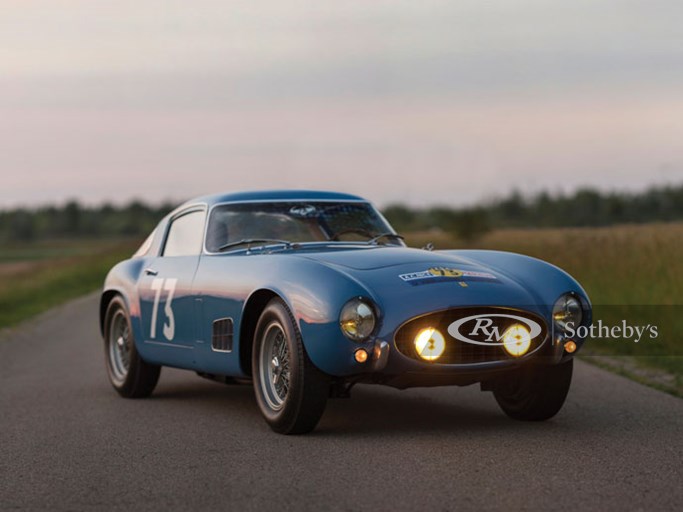 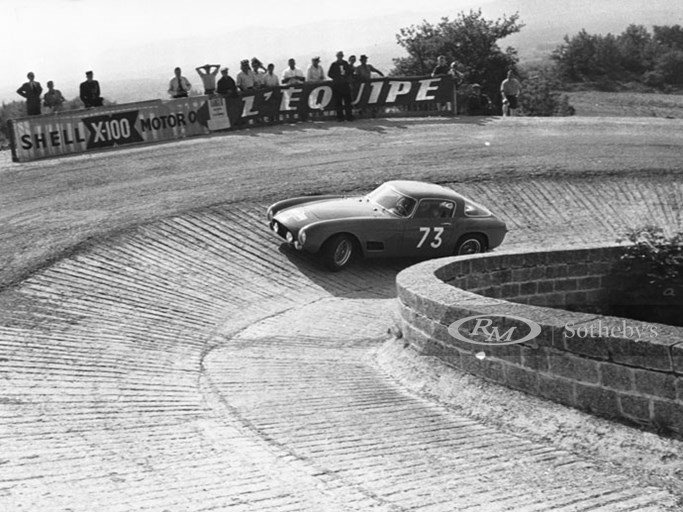 An important piece of Ferrari history, this influential berlinetta is the actual car that instituted the ‘Tour de France’ nomenclature following its overall victory at that race in 1956. The announcement of its addition to RM’s Monterey lineup coincides with the release of the company’s complete digital Monterey catalogue, now available at www.rmsothebys.com.

“Our Monterey sale continues to raise the bar for collector car auctions year after year, and we’re excited to continue the tradition next month. Our specialists have handpicked a truly outstanding roster of vehicles for this year’s sale, each vetted for its correctness and authenticity – it will certainly be a great showcase of our focus on quality of product and inventiveness of presentation,” says Ian Kelleher, Managing Director, RM Sotheby’s West Coast Division.  “We’re thrilled to round out what is certainly our finest Monterey offering to date with a car of such incredible historical significance as the first ‘Tour de France’-winning, Tour de France!”

The fifth of only seven Scaglietti-bodied first-series competition berlinettas, 0557GT is certainly one of the most important ‘Tour de France’ examples in existence and among the most historically important Ferrari competition cars ever built. Destined for the track, it was sold new to the legendary Marquis Alfonso de Portago, the flamboyant and daring Spanish driver, who, joined by his close friend Ed Nelson, entered the car in the 1956 Tour de France Auto. The event saw 0557GT routed at 3,600 miles and undertake two hillclimbs, one drag race, and six races at various circuits, including Le Mans, Comminges, Rheims, and Montlhéry. Portago and Nelson managed to win five of the six circuits, claiming 1st overall and beating both Stirling Moss’s Mercedes-Benz 300 SL and future three-time Tour winner Olivier Gendebien’s Ferrari 250 Europa GT. 0557GT’s spectacular performance marked the first of four consecutive victories for the mighty 250 GT Berlinetta model at the French race, a foundation of its legend and TdF namesake.

0557GT is essentially undefeated in its racing career. Following its triumph at the Tour de France, Portago piloted the car to a 1st-overall finish at the Coupes du Salon at Montlhéry in October 1956, followed by a 1st place finish at the Rome Grand Prix that same year. He went on to drive the car to the top of the podium at the Coupes USA in April 1957. Following Portago’s tragic and untimely death at the Mille Miglia in May 1957, 0557GT was returned to the Maranello factory and offered by the Portago family to Alfonso’s friend, C. Keith W. Schellenberg, of Richmond, Yorkshire, England, who kept the car for the next two decades.

Since that time, 0557GT has passed through a well-documented chain of owners, has been the recipient of a ground-up restoration by marque specialists, and subsequently, exhibited at many of the world’s leading events. It is important to note that it has never been wrecked or suffered any major damage, and remains highly original, which is unusual for a car with such phenomenal racing pedigree. In recent years, 0557GT’s success on the track has transferred to the show field, with the ravishing Ferrari earning numerous awards, including at the Pebble Beach Concours d’Elegance. Presented in wonderful cosmetic and mechanical condition, it is offered at RM Sotheby’s Monterey sale for the first time in 23 years, where it is expected to set a new benchmark for the model. A short video of the Tour de France in action is available for viewing here: http://bit.ly/1Is2Oix (Estimate available upon request).

“The ‘Tour de France’ is the first significant model in Ferrari’s successful 250 lineage – it predates the Testa Rossa, the SWB Berlinetta, the 250 GTO and the 250 LM, and, as such, represents an important milestone in the company’s history,” says Alain Squindo, Vice President, RM Sotheby’s.

Squindo continues, “0557GT is part of a very exclusive group of Ferrari’s most historically important individual cars, as famous designations like “Mille Miglia,” “Daytona,” and of course “Tour de France” were earned by singular cars that reigned victorious at those races. 0557GT therefore stands head and shoulders above its fellow stablemates, which it effectively named. Add to that the car’s history with Fon de Portago, its exquisite presentation and freshness to market, and the scene is set for a very, very memorable Monterey auction.”

In a year where Ferrari is set to take center stage at the Pebble Beach Concours d’Elegance, it is fitting that the TdF is surrounded at the RM sale by no less than 37 other examples from the famed Maranello marque. Among other highlights, the previously announced 1950 Ferrari 275S/340 America Barchetta, chassis 0030MT, one of nine Works-entry Ferrari barchettas of the 1950s and raced in period by Alberto Ascari, Giovanni Bracco and Gianni Marzotto (Est. $7,500,000 - $10,000,000); and, the 1956 Ferrari 250 GT Coupe ‘Boano Prototype’, chassis 0435GT, the fourth of nine Pinin Farina-bodied prototypes and formerly owned by racing manager, Paul Blancpain (Est. $1,250,000 - $1,750,000).

The auction will also lift the gavel on a carefully curated selection of automobiles from some of the world’s other most admired marques. Additional notable entries include:

For full event details, or to view the complete digital catalogues for both RM’s traditional Friday / Saturday Monterey sales, as well as The Pinnacle Portfolio, please visit www.rmsothebys.com or call +1 519 352 4575.

About RM Sotheby’s
RM Sotheby’s (formerly RM Auctions) is the world's largest auction house for investment-quality automobiles. With 35 years’ experience in the collector car industry, RM's vertically integrated range of services, from private treaty sales and auctions to estate planning, and financial services, coupled with an expert team of car specialists and an international footprint, provide an unsurpassed level of service to the global collector car market. RM proudly holds four of the top ten all-time records for the most valuable motor cars sold at auction. In February 2015, RM formed a strategic partnership with Sotheby’s, uniting the two companies for the full calendar of future automobile auctions. For further information, visit www.rmsothebys.com.