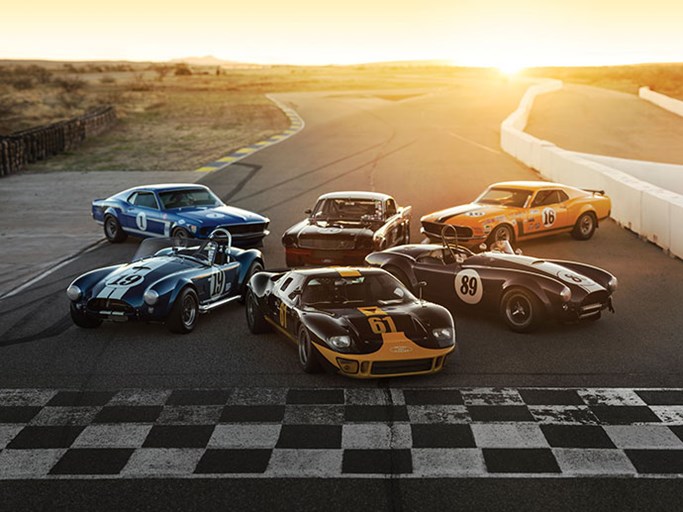 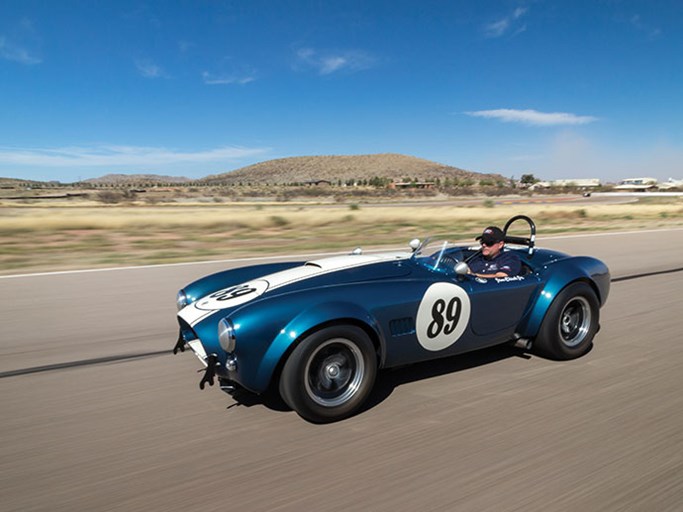 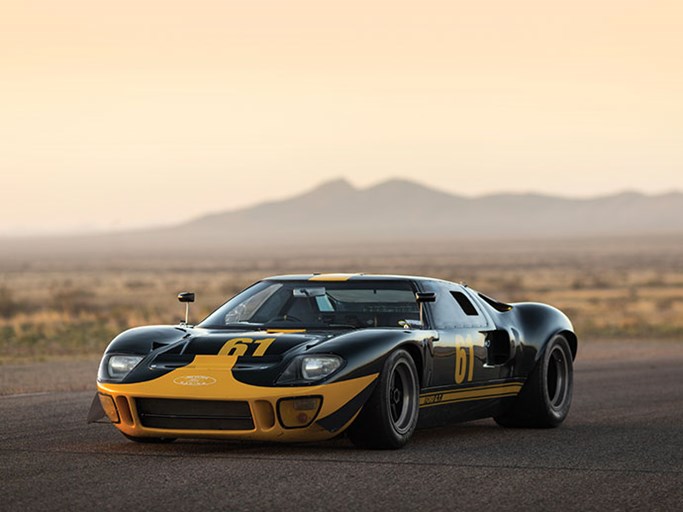 CULVER CITY, California (May 4, 2016) – RM Sotheby’s, the world’s largest collector car auction house for investment-quality automobiles, is thrilled to announce a selection of vehicles from the esteemed Jim Click Ford Performance Collection as early highlights for its flagship Monterey, California sale, August 19-20. One of the most notable collections of competitive racing Fords and Shelbys ever assembled, the group slated for Monterey comprises six outstanding vehicles, each typifying the very best of their individual breed.

The Jim Click Ford Performance Collection represents over 25 years of passionate acquisition by lifelong enthusiast, Jim Click, Jr. A third generation automotive businessman, Mr. Click is owner/operator of one of America’s largest automotive dealer networks, with 16 full-service dealerships in Arizona and California. His passion for all things automotive saw him branch into vintage racing in 1991 as a hobby, giving birth to Jim Click Racing, and ultimately, the Jim Click Ford Performance Collection—a handpicked stable of highly qualified, professionally maintained vintage race cars. All have been actively and successfully campaigned by Mr. Click and his friends during their tenure in the Click Collection, delivering countless hours of pure adrenaline and fantastic results. This summer, as Mr. Click downsizes his prized group, RM Sotheby’s has the privilege of bringing six vehicles to Monterey, where they are sure to incite strong interest.

“We’re beyond thrilled to have been entrusted with the sale of the Jim Click Collection in Monterey – the cars that make up the collection are truly some of the best examples on the planet,” says Donnie Gould, Car Specialist, RM Sotheby’s. “Jim Click is an avid race driver, a genuine enthusiast, and a big proponent for jumping behind the wheel and using cars as they’re intended. He’s personally driven all the vehicles in his collection—joined by co-driver Mike McGovern—and has been a frontrunner in every race he’s competed in, building on their race-winning heritage.  We recently had the  pleasure of spending a couple of days on the track with the Click cars and can attest they are all exceptional vehicles – absolute magic! Each has been kept in top racing form, thanks to none other than the legendary Don Roberts, who made them extremely fast and extremely safe. They’re so dialed in, it’s amazing!”

While the sale will no doubt provide a bittersweet moment for Mr. Click, his eyes light up when he thinks of the thrills in store for their next caretaker, as shown in this short video commentary: http://bit.ly/1rVhrV7.

“It’s time for me to let someone else enjoy the cars like I have,” says Click. “They are fantastic cars – thoroughly prepared to the extent that we’ve never had a safety issue. Whoever ends up owning them, you’re in for a truly exciting ride. I hope you have at least half as much fun with these cars as I have had over these last 25 years.”

For Shelby fanatics, the selection of Jim Click cars is headlined by one of the most successful racing Cobras of all time: the 1964 Shelby 289 ‘Competition’ Cobra, CSX 2473. The car’s early history saw it sold new to one of Carroll Shelby’s own employees, James Findlay, who purchased it at a wholesale price, and, as his budget allowed, upgraded it to competition specification, prior to selling it back to Shelby. Its next owner, SCCA legend, Don Roberts, has been intimately intertwined with the car since the sixties, having owned, raced and maintained the Cobra, on and off, ever since.

For Roberts, success behind the wheel of CSX 2473 was immediate. In his debut outing at an SCCA regional event in Tucson, Arizona in November 1966, he finished first in the A-production class. The Cobra was then converted to B-production specification, and over the next two years, Roberts went on to rack up no less than fourteen 1st-place finishes, an enviable record for any racing driver across all categories. In 1968, Roberts was crowned Southern Pacific Divisional B-production Class Champion, a win that qualified him for the American Road Race of Champions at Riverside where he decimated the competition, earning himself the title of B-production Class National Champion.

Roberts briefly parted with CSX 2473 in 1969, only to reunite with the car for the 1972 season. It again proved an unbeatable combination, with Roberts piloting CSX 2473 to back-to-back Southern Pacific Divisional B-Production Class Championship titles in 1972 and 1973, ranking the car a three-time SCCA Divisional Champion. A second brief spell in ownership ensued, with Roberts acquiring the Cobra a third time in 1980. As he had done so often before, he returned to the track in CSX 2473, this time topping the podium four years in a row at the Monterey Historics (1980 – 1983). Although Roberts’ personal ownership of CSX 2473 eventually came to a close in 1984 when he sold it a final time, he has remained no stranger to the machine; CSX 2473 was acquired by Jim Click in 2006 and has been frequently raced at historic events, maintained by none other than… Don Roberts (Est. $2,200,000 - $2,600,000).

“CSX 2473 is, without question, one of the most successful 289 Competition Cobras in history, and it’s certainly fitting to offer it in Monterey, a place where it has enjoyed tremendous success over the years,” comments Alexander Weaver, Car Specialist, RM Sotheby’s. “It features an unrivaled period racing history with countless wins to its name, and significantly, has not claimed a single DNF in its illustrious career. Its provenance is further elevated by its long and successful association with racing great, Don Roberts. Ready to return the track, CSX 2473’s racing career is far from over; highly competitive, it’s sure to find itself back on the podium at future historic racing events.”

Also slated for RM’s Monterey podium is the 1966 Ford GT40 Mk I, chassis no. P/1061, a highlight of the Click Collection for over two decades. One of just 31 Mark I road cars, the featured GT40 was one of seven retained for promotional use by Ford’s merchandising department -  a role that saw it take to the road and used by the company’s Southeast Regional Sales district in 1967 as part of dealership displays, auto shows and demonstration laps at SCCA events. At the end of its time on the display circuit, P/1061 passed through a well-documented chain of enthusiast owners, including noted Australian racing driver, Bib Stillwell, before landing with Jim Click in 1992. In the years since, Mr. Click has actively raced P/1061 across the country where it has proven an excellent competitor, including at such venues as Laguna Seca, Riverside and Palm Springs (Est. $3,750,000 - $4,250,000).

“It’s no surprise that the Click stable includes a GT40 – a true pinnacle in Ford performance,” adds Gould. “The key to this car is that it has been ‘massaged’ over the  past 35 years to make it a fierce competitor. It’s another example of a car within the Click Collection that Don Roberts has worked his magic on, creating one of the best GT40’s that anyone could ever acquire and put on the race track. A true thrill to drive.”

The group of six vehicles slated for the Monterey auction is rounded out by:

RM Sotheby’s (formerly RM Auctions) is the world's largest auction house for investment-quality automobiles. With 35 years’ experience in the collector car industry, RM's vertically integrated range of services, from private treaty sales and auctions to estate planning, and financial services, coupled with an expert team of car specialists and an international footprint, provide an unsurpassed level of service to the global collector car market. In February 2015, RM formed a strategic partnership with Sotheby’s, uniting the two companies for the full calendar of future automobile auctions. For further information, visit www.rmsothebys.com.