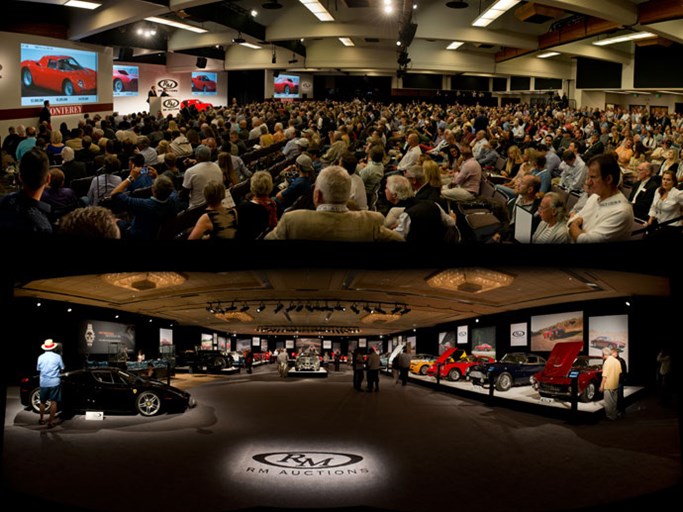 BLENHEIM, Ontario (August 19, 2014) – RM Auctions, the world’s largest collector car auction house for investment-quality automobiles, celebrated its 35th anniversary in the collector car hobby on the weekend with its best performance to date: $143.4 million in sales with a strong 91 percent sell-through at its flagship Monterey, California sale. Held during the prestigious Pebble Beach Concours d’Elegance weekend, the event ranks as the highest grossing collector car auction of all time, breaking the previous record set by RM in 2013. In addition, the sale also established a new benchmark for a single-day collector car auction, realizing more than $88 million during just four hours of lively bidding at its Saturday session.

RM’s spectacular results were generated by the sale of 118 ‘best of category’ automobiles before a packed house. Highlighted by its exceptional quality, the carefully curated offering commanded the attention of the world’s most discerning collectors, with bidders representing 29 countries, including Russia, Hong Kong, Japan and Brazil. Thirty-five automobiles achieved million-dollar-plus results, with three lots exceeding $10 million.

“The sale reflected our commitment to bringing the very best to market. From the first lot on Friday night through to the final lot on Saturday evening, this year’s offering was defined by its incredible quality. The high-caliber of entries, combined with accurate auction estimates provided by our expert specialists, generated strong interest and made for an incredibly exciting auction,” said Ian Kelleher, Managing Director of RM Auctions’ West Coast Division. “The atmosphere in the auction room was electric with numerous spirited bidding contests, strong prices recorded across all categories, and a number of new benchmarks set. We’re thrilled with the results –a very fitting way to mark our 35th anniversary in the collector car hobby.”

The top-sellers list was dominated by an exceptional series of Ferrari motor cars. Top honors went a spectacular 1964 Ferrari 275 GTB/C Speciale, the ultimate connoisseur’s Ferrari, which roared onto the auction stage on Saturday evening to applause from the crowd. Combining looks, rarity and performance, bidding opened at $15 million, quickly climbing to an outstanding final price of $26,400,000 to comfortably cement the car’s place in the history books as one of the most valuable automobiles ever sold at public auction. Footage of the Speciale crossing the podium is available here: http://bit.ly/montereyFerrari275GTBCSpeciale. Other sale-topping Ferraris included a purebred 1964 Ferrari 250 LM, which led RM’s Friday sale session at $11,550,000 (video: http://bit.ly/monterey250LMsale), along with the ex-Steve McQueen 1967 Ferrari 275 GTB/4, one of the most highly anticipated lots of the week, which sparked a fierce bidding war to sell for $10,175,000, more than triple the previous record for the model (video: http://bit.ly/montereyMcQueenSale).

Additional highlights included the historic Austie Clark 1911 Mercer Type 35R Raceabout, offered from single-family ownership since 1949, for $2,530,000, a record for a Mercer sold at auction, and a 1955 Mercedes-Benz 300 SL, which achieved the same price to set a new auction record for a non-alloy Gullwing. The sale also illustrated the growing demand for Japanese collector cars with a legendary 1972 Nissan Skyline H/T 2000GT-R ‘Hakosuka’ exceeding estimate at a strong $242,000, and a beautifully restored 1967 Toyota 2000GT which broke seven figures at $1,045,000.

RM continues its busy summer calendar of events, September 8 in London, England for its annual sale at Battersea Evolution held in partnership with the Concours of Elegance at Hampton Court Palace.