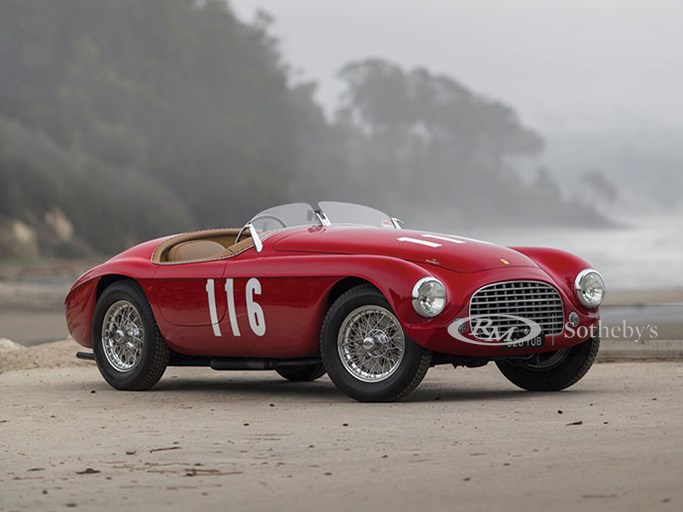 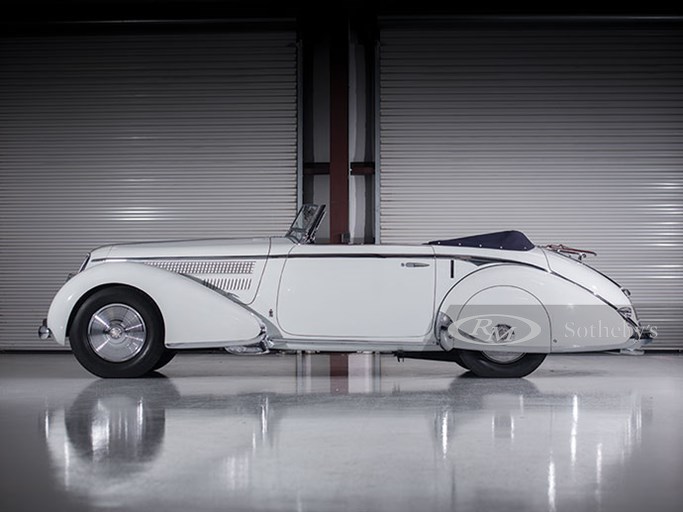 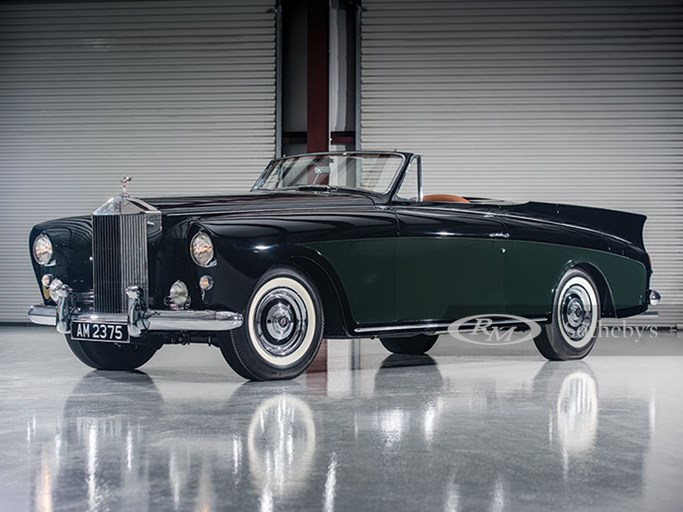 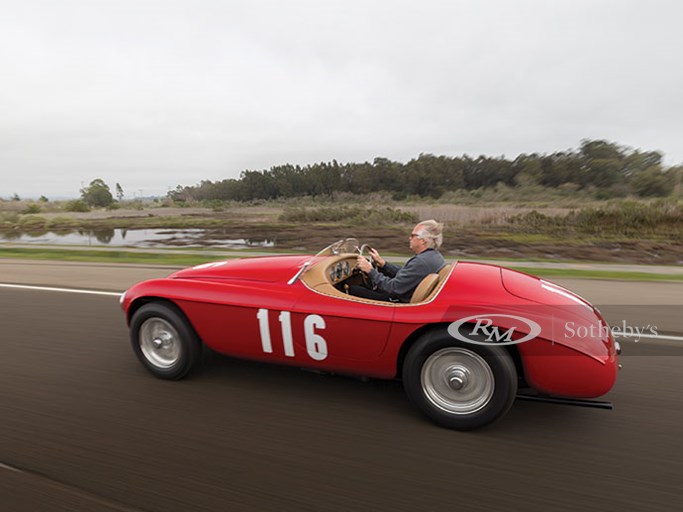 A remarkably pure, two-time Mille Miglia Veteran
The 1950 Ferrari 166 MM, chassis no. 0058 M, comes to market an exemplary example of the model, and one of the most important and beautiful Ferraris ever built. The 27th of just 32 166 MM examples, and the 23rd of only 25 Touring barchettas, it was delivered to its first owner of record in June 1950, before being gifted to future Scuderia Ferrari racing driver, Eugenio Castelotti, who would race the car at many of the leading events throughout Italy, including the Mille Miglia in 1951. Chassis 0058 M returned to the Mille Miglia in 1953 before being exported to the United States where it continued its racing pursuits, including at the Pebble Beach Road Races.

In addition to its competition pedigree, 0058 M boasts a distinguished ownership record, having been carefully maintained by some of the hobby’s most discerning collectors, including more than two decades with respected Ferrari Club of America Chief Judge, Ed Gilbertson. During his custodianship, Gilbertson actively enjoyed the car, presenting it at a string of FCA events to great acclaim. Over the years, 0058 M has also enjoyed a decorated concours career, including no less than five appearances at the Pebble Beach Concours d’Elegance, where in 1979, it was awarded the coveted Hans Tanner Trophy. Testament to its incredible originality, it has also garnered multiple Platinum awards at the Cavallino Classic, FCA National Meet and Concorso Italiano.

Beyond its provenance, 0058 M’s extreme desirability lies in its incredible purity and authenticity. Extraordinarily original, it is matching numbers throughout, including its original Touring body, V-12 engine, gearbox and differential, and comes to Amelia Island complete with the all-important Ferrari Classiche certification (Est. $8,000,000-$10,000,000).

“The 166 MM is, unequivocally, one of the most important sports cars ever constructed; it is essentially the cornerstone on which Ferrari built their successful formula, or if you like, the padrino of all the short-block based competition cars that followed, from the 195 and 212 Exports to the 225 S, the 250 GT Tour de France and Testa Rossa. As such, its significance in the marque’s history cannot be overstated,” says Shelby Myers, Car Specialist, RM Sotheby’s.

“In the rarefied air that is Ferrari’s 166 MM, 0058 M is one of the best of the very best,” adds Myers. “It possesses all of the critical attributes a collector wants in a Ferrari sports racer: rarity, period racing history in Italy and the U.S., a high level of originality, as well as a successful show career. A very special car and extremely eligible for the world’s top concours and driving events, we’re thrilled to bring it to market in Amelia Island.”

The Pride and Passion of Orin Smith

Beyond a fantastic stable of Ferraris, all eyes will be on RM Sotheby’s presentation of ‘A Gentleman’s Collection: The Pride and Passion of Orin Smith’ – a superlative group of 63 automobiles offered largely ‘without reserve’ during an exclusive evening sale on Friday, 10 March. In addition to previously announced feature cars, catalogue highlights include a spectacular 1936 Lancia Astura Cabriolet Series III “Tipo Bocca” by Pinin Farina, the centerpiece of the Smith Collection, along with a virtually flawless 1958 Rolls-Royce Silver Cloud I Drophead Coupe "Honeymoon Express" by Freestone & Webb.

With its aerodynamic profile, the Lancia Astura, chassis no. 33-5313, is the pinnacle of pre-war Lancias. Sporting unique coachwork by Mario Revelli di Beaumont for Pinin Farina, it is believed to be the first of three or fewer PF cabriolets built on the sporting, ‘Corto' short-wheelbase chassis from a total six cabriolets including the long wheelbase 4-seater. A masterpiece of Italian design and engineering, it first wowed audiences on Pinin Farina’s stand at the 1936 Milano Motor Show, where it was awarded the President’s Cup from the Registro Ancetre Club Italia. This was closely followed by a class award at the inaugural Concorso d’Eleganza San Remo in May 1937. A cherished part of the Orin Smith Collection since 2011, in recent years the Astura has been restored to international concours standards, the quality of which has earned it accolades both sides of the pond, including special awards at the Amelia Island Concours d’Elegance, and the Concorso d’Eleganza Villa d’Este. Most recently, it was exhibited at the Petersen Automotive Museum in Los Angeles as part of their “Rolling Sculpture” exhibit of advanced streamlined design. Notably, a sister car to this lovely Astura, in long-wheelbase form, was awarded Best of Show at the 2016 Pebble Beach Concours d’Elegance, cementing its importance to design and elegance for the era (Est. $2,000,000-$2,600,000).

The “Honeymoon Express” is another magnificent automobile reflecting Orin Smith’s incredible eye for automotive artistry, and represents the most extravagant, streamlined “Jet Age” design on a Rolls-Royce chassis; never before had such modern styling been seen on a conservative British luxury automobile. The example on offer, chassis no. SGE270, is one of only two built to the “Honeymoon Express” design, and, with its sister car in long-term ownership, the only example available or likely to become so. The recipient of a superb, award-winning restoration by marque specialists, it has enjoyed a known history with three, private long-term owners from new (Est. $1,300,000-$1,800,000). The complete Orin Smith Collection digital catalogue is available here: http://bit.ly/2kyUZgi.