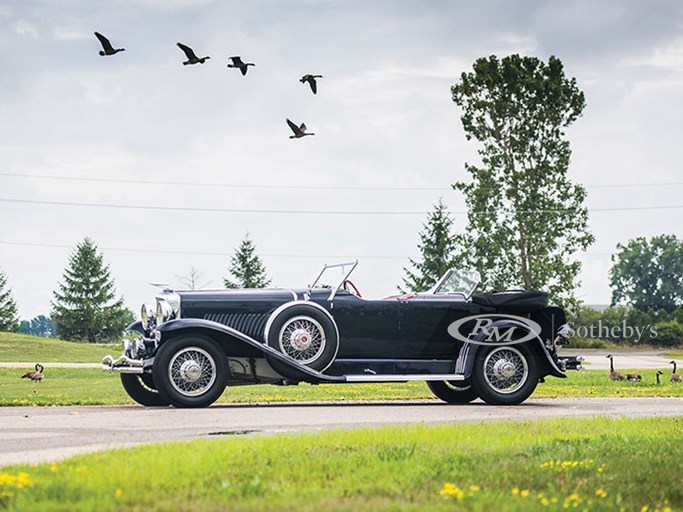 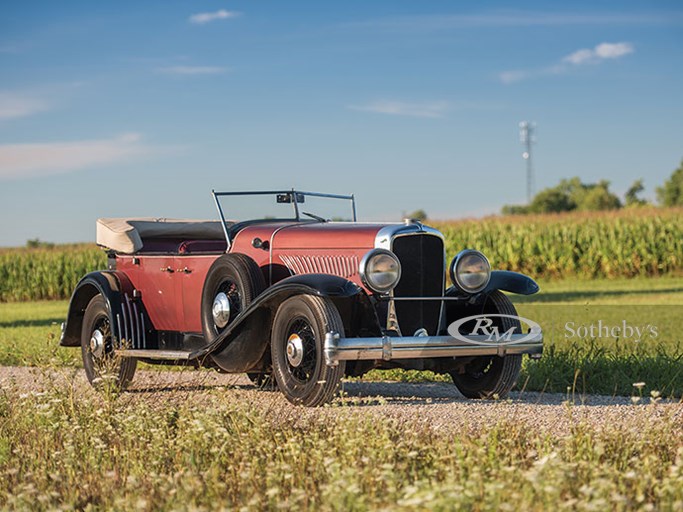 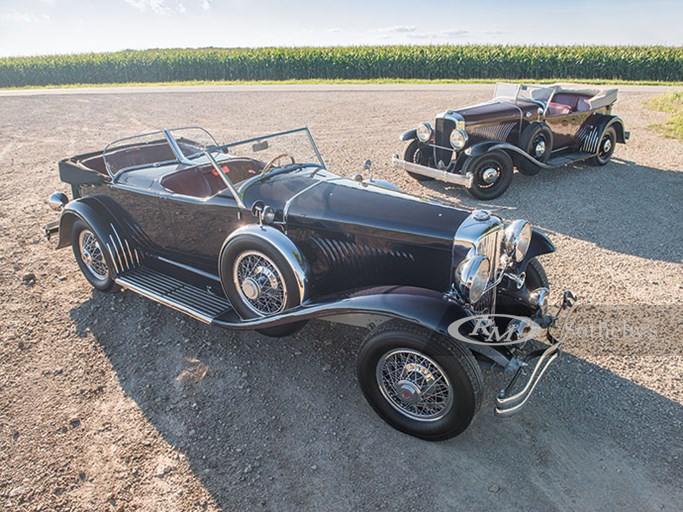 The pair of headlining Duesenbergs is led by the 1930 Model J Dual-Cowl Phaeton, J-347, one of only three Dual-Cowl Phaetons originally bodied to coachbuilder Walter J. Murphy’s stunning open design. Of this select group, J-347 boasts the purest and most fascinating ownership history, dating back to its very first caretaker, John F. Howard. Typical of the interesting men who owned Duesenbergs, Howard was famous as “the Mayonnaise King,” having made millions from a line of salad dressings produced to his wife’s recipes in Massachusetts. He later relocated to Mexico, where he took delivery of what would become known as the “Mexican Duesenberg”. Following a succession of short-term Mexican owners that included a film studio, the car’s last Mexican owner placed J-347 into storage in the parking lot of the Mexico City airport, where it remained—surrounded by a short brick wall—until discovered by late Duesenberg historian Raymond Wolff in 1962.

Wolff promptly purchased the original automobile and brought it back to the United States, soon after selling it to the father of its current owner, with whose family it has remained for a remarkable 54 years. It comes to Hershey sporting its well-preserved, original restoration, mirroring its appearance when displayed at Hershey in October, 1963. Aesthetically, J-347’s dark purple finish and red leather interior have an appealing rich patina; a wooden steering wheel from a 1930s Mercedes-Benz, a feature the car has donned for decades, adds additional character and has become something of a signature. Wonderfully pure, original and rarer than its contemporaries, J-347 has made several appearances at concours d’elegance and at the ACD Club National Reunion over the years. It comes to auction an ideal candidate for a renewed show career or for enthusiastic driving in vintage events (Est. $1,600,000 - $2,000,000).

“There’s no better way to celebrate a decade of incredible auctions in Hershey than by presenting great American classics, offered out of long-term ownership and with truly fascinating histories,” says Gord Duff, Car Specialist, RM Sotheby’s. “Our Hershey auction boasts a great track record for selling world-class Duesenbergs; we’re thrilled to continue the tradition this October as we present what are surely two of the most significant Duesenbergs to come to market in recent years.”

As exhibited by J-347, every great Duesenberg has a tale to tell, beginning with an interesting owner. The second car set for the Hershey podium, the 1927 Duesenberg Model A/Y Phaeton Prototype, also fits this bill. After acquiring Duesenberg Motors in 1926, E.L. Cord, along with founding brother Fred Duesenberg, set out to build the world’s greatest automobile. They put together a prototype, dubbed the Model Y, using the chassis of the Model A and a prototype engine based on the Model A’s SOHC unit evolved for a reported output near 200 hp. Two examples of the Model Y were produced, each with prototype styling developed by the brilliant Alan Leamy. The first car, a sedan, was delivered to actor Frank Morgan, best known for his title role in 1939’s The Wizard of Oz, though it unfortunately did not survive the Classic Era. The second car, a phaeton bodied by McFarlan, was sold in 1932 to Fred Duesenberg’s brother August, the genius racing mechanic, on the condition that he destroy the prototype chassis. After doing just that and moving the engine into a racing car that still survives today, “Augie” installed the full McFarlan bodywork on a used Model A chassis, no. 912, and sold the car to Indianapolis businessman Hugh R. Baylor.

Following Mr. Baylor’s passing, the Model A/Y remained with his family until 1951, when it passed through the hands of James T. Leeson, who overhauled the car mechanically and cosmetically before selling it to the father of its current owner in 1957. It has since been conscientiously preserved by its third family owners for nearly six decades, during which time it has been on long-term display at the ACD Automobile Museum in Auburn, Indiana. One of the most historically significant Duesenberg in private hands, it comes to RM’s Hershey sale presented as it was when sold by Augie Duesenberg in 1932 (Est. $450,000 - $550,000).

The historic pair of Duesenbergs lead a carefully curated selection of approximately 120 important automobiles set for RM Sotheby’s 10th annual auction at the Hershey Lodge. For further event information and to view a frequently updated list of entries for the sale, please visit www.rmsothebys.com or call +1 519 352 4575.

In addition to its two-evening sale, RM Sotheby’s proudly returns as the presenting sponsor of the AACA’s Night at the Museum on October 5, supporting the AACA Family. A fantastic celebration of the motoring hobby, the annual event at the AACA Museum provides a great addition to the Hershey meet week festivities, and will this year be highlighted by the opening of the museum’s newest exhibit, Route 66. For further information on the AACA, visit www.aaca.org. For more on Night at the Museum, visit www.AACAMuseum.org.

RM Sotheby’s (formerly RM Auctions) is the world's largest auction house for investment-quality automobiles. With more than 35 years’ experience in the collector car industry, RM's vertically integrated range of services, from private treaty sales and auctions to estate planning, and financial services, coupled with an expert team of car specialists and an international footprint, provide an unsurpassed level of service to the global collector car market. As a company, RM Sotheby’s has established numerous auction benchmarks, and proudly holds five of the top ten all-time records for the most valuable motor cars sold at auction. In February 2015, RM formed a strategic partnership with Sotheby’s, uniting the two companies for the full calendar of future automobile auctions. For further information, visit www.rmsothebys.com.

About the AACA Museum

The Antique Automobile Club of America Museum, a Smithsonian Affiliate, displays beautifully restored automobiles, buses and motorcycles in unique life-like scenes representing the 1890s – 1980s in a cross-country journey from New York to San Francisco.   This Museum, a 501(c) (3) non-profit organization, is known to be one of the largest automotive museums.  Special exhibits change several times a year and focus on a variety of eras and types of vehicles.  The Museum is in South Hanover Township, located just off Route 39, one mile west of Hersheypark Drive, Hershey, Pennsylvania.  Regular admission $12, seniors age 61 and older $11, juniors age 4-12 $9, children age 3 and under and AACA Members are FREE.  The Museum is open daily from 9:00 AM to 5:00 PM but offers extended operating hours during Hershey Fall Meet Week.  For further information, please call 717-566-7100 or visit www.AACAMuseum.org.