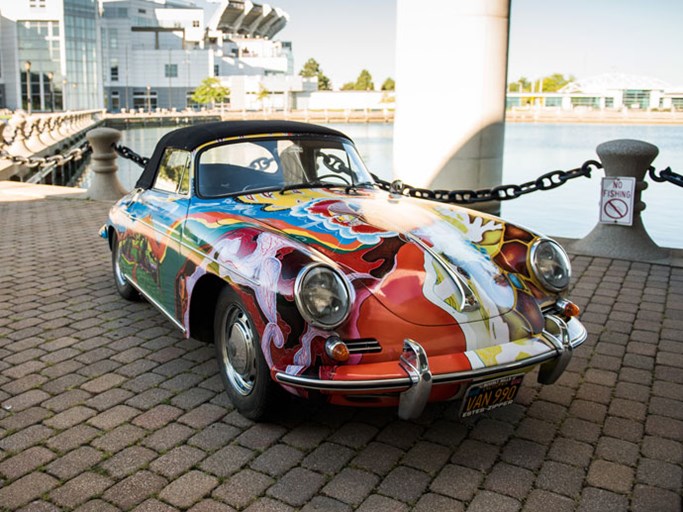 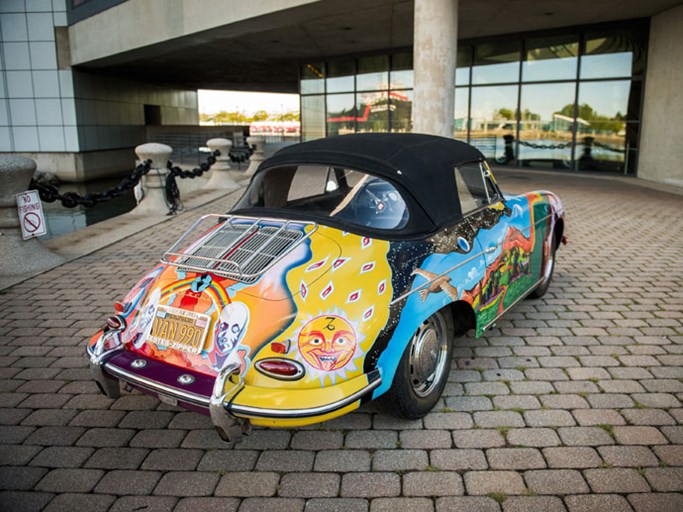 NEW YORK, New York (September 15, 2015) - She may have famously sung “Oh Lord, won’t you buy me a Mercedes-Benz”, but legendary singer Janis Joplin personally drove an unmistakably wild 1964 Porsche 356 C 1600 SC Cabriolet. This December, Joplin’s iconic Porsche will be offered as a star attraction at RM Sotheby’s exclusive Driven by Disruption sale in New York City - just in time for the holidays!

“Janis Joplin’s 356 C is without question one of the most important Porsches of all time,” says Ian Kelleher, Managing Director of RM Sotheby’s West Coast Division. “It’s a fantastic automobile that transcends art, pop culture and social movements, and is as groundbreaking and stunning as the renowned singer was herself.”

Joplin purchased the Porsche in September 1968 and decided that the original Pearl White finish was slightly too conservative for the Queen of Rock and Roll. She engaged Dave Richards, a friend and roadie with her band, Big Brother and the Holding Company, to customize the car with a kaleidoscopic mural. Described by Richards to represent ‘The History of the Universe’, the dramatic artwork included such graphics as butterflies and jellyfish, as well as a portrait of Joplin with members of the band. The finished product was as colorful as the singer’s personality and certainly representative of the era - a one-of-a-kind flamboyant symbol of San Francisco’s psychedelic rock age. The car quickly became identified with Joplin, who was frequently seen driving it in period.

As Janis’s sister and biographer, Laura Joplin recalls, “Janis drove the car everywhere, all around San Francisco and down to Los Angeles when she was recording there. Wherever Janis went in the car, her fans recognized it. When she parked it and returned, there was always at least one fan note under the wipers.”

Following Joplin’s untimely death in 1970, the Porsche has remained in her family’s ownership, and was enjoyed by her manager, Albert Grossman, who drove it for several years, lending it to visiting family and friends. By the early 1990s, the car was treated to a meticulous restoration, preserving the integrity of the Porsche and presenting the car precisely as it was customized in period.

The Janis Joplin Porsche went on display at the Rock and Roll Hall of Fame in Cleveland in 1995, where it remained a permanent and popular display up until this week. Offered for sale by the Joplin Family, it is expected to bring in excess of $400,000 when it crosses RM Sotheby’s New York podium in December.

Michael Joplin comments, “Besides Janis's music and legacy, her Porsche is the most visual and important piece of memorabilia that exists. Like most people and their car of choice, her Porsche is a direct link to Janis.  She drove it everywhere - and with everyone that was anyone in the San Francisco music scene - with the top down and her feathers flying. Her music, life and car are a part of rock and roll history.”

Kelleher adds, “As a titan of the creative movement of the late 1960s, Janis Joplin remains one of the music industry’s brightest stars. It is an honor to be working with her family in the sale of this magnificent Porsche and even more so to have the opportunity to showcase such an important woman’s ownership of a classic car.”

The Joplin Porsche will be joined at RM Sotheby’s December 10 sale by a carefully curated selection of some 30 creatively-styled and pioneering motor cars, and select automotive-themed artwork. The second iteration of the company’s Art of the Automobile event, the December auction has been entitled Driven by Disruption. Much like the Porsche’s groundbreaking artwork, each of the cars in the auction showcases the extremes of motoring history and the molds that were broken by engineers and designers in pushing the automotive envelope. Previously slated for November, the new December date was strategically chosen to coincide with one of the most spectacular times of the year in New York City.

“Whether it be a stunningly beautiful coachbuilt automobile, a wild, untraditional design, or a marvel of high performance engineering, the auction will present cars that break with the conventional morals of car design and production. We are delighted to showcase this exhibit during a time in New York that is truly magical,” states Kelleher.

The new sale date is perfectly suited to the tastes and interests of RM’s collector car clients, providing opportunity for them to not only spend a few days in New York during the electric holiday season, but to also enjoy other events taking place during the same period, including Sotheby’s Important Watches and Magnificent Jewels sales. As a prelude to the Driven by Disruption sale, an exclusive six-day exhibition will open over the weekend of December 5 in Sotheby’s 10th floor galleries.

For further information, or to view a frequently updated list of entries for the sale, please visit www.rmsothebys.com or call +1 519 352 4575.

About RM Sotheby’s
RM Sotheby’s (formerly RM Auctions) is the world's largest auction house for investment-quality automobiles. With 35 years’ experience in the collector car industry, RM's vertically integrated range of services, from private treaty sales and auctions to estate planning, and financial services, coupled with an expert team of car specialists and an international footprint, provide an unsurpassed level of service to the global collector car market. As a company, RM Sotheby’s has established numerous auction benchmarks, including the current record for the highest-grossing collector car auction of all time, with $172.9 million in sales at its 2015 Monterey event. In February this year, RM formed a strategic partnership with Sotheby’s, uniting the two companies for the full calendar of future automobile auctions. For further information, visit www.rmsothebys.com.

Images are available upon request