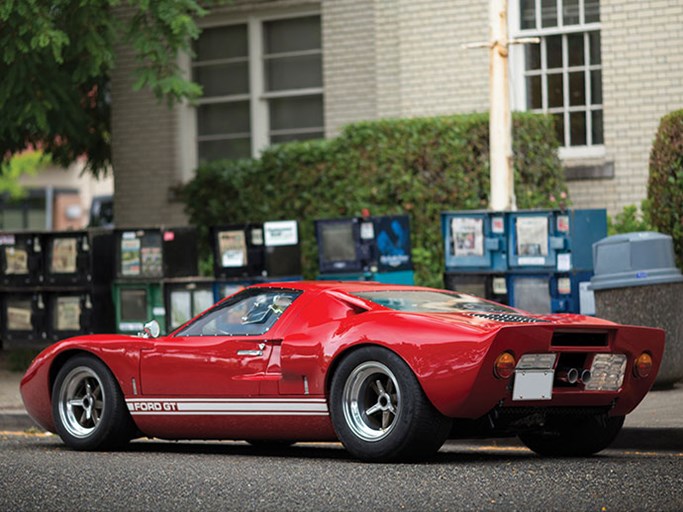 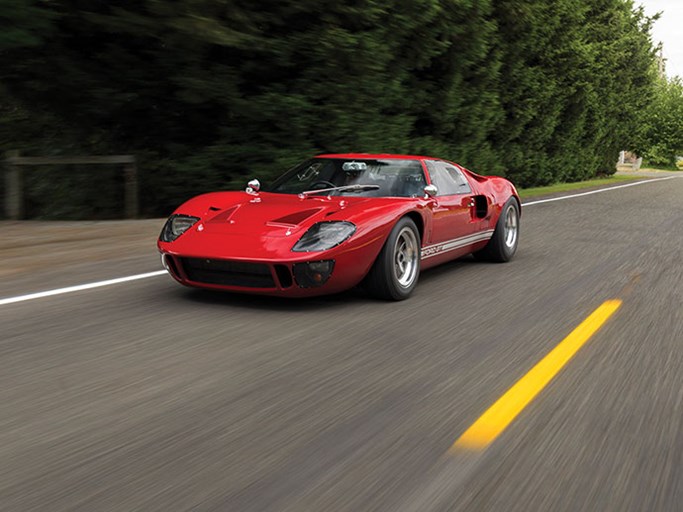 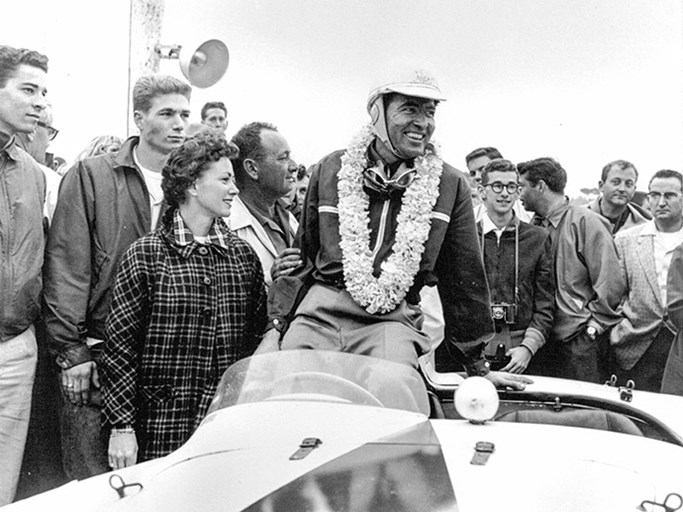 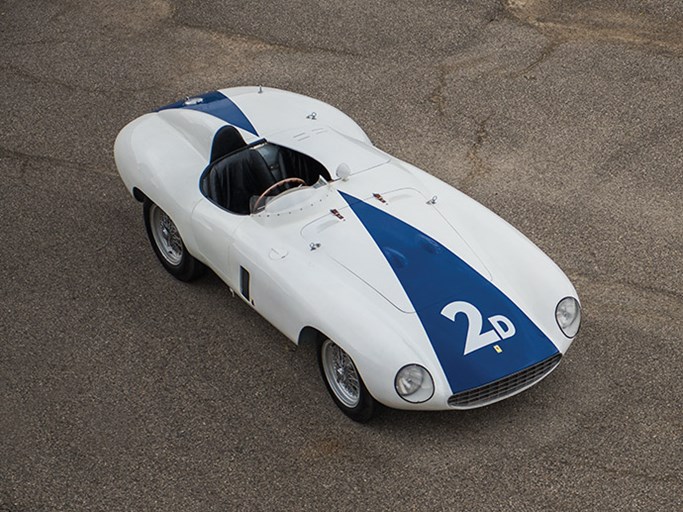 BLENHEIM, Ontario (June 16, 2016) – RM Sotheby’s, the world’s largest auction house for investment-quality automobiles, is thrilled to add two icons of competition and performance to its flagship Monterey sale, August 19-20 in California: the 1955 Ferrari 750 Monza Spider, chassis no. 0510 M, and the 1966 Ford GT40 Mk I, chassis no. P/1057. Alongside the previously announced Jim Click Ford Performance Collection, these latest additions are part of a growing showcase set for this year’s RM sale dedicated to celebrating cars with significant American history.

The 1955 Ferrari 750 Monza Spider, chassis no. 0510 M, represents an important piece of Ferrari competition history, and was one of the most rewarding sports racers of its era. A superlative example of the breed, 0510 M boasts a significant American racing provenance having been successfully campaigned in period by the ‘Big Three’ of the American racing scene - Phil Hill, Carroll Shelby and Jim Hall.

Sold new to Allen Guiberson of Dallas, Texas, who owned and campaigned multiple early Ferraris, 0510 M was finished in the distinctive color combination of white with a dark blue triangle stretching from the car’s nose to its windshield. The car retained this unique color scheme for the 1955 season, where it achieved great success at the hands of some of motor racing’s great drivers. Among highlights were a 2nd overall at its debut event, the 12 Hours of Sebring, with Phil Hill and Carroll Shelby behind the wheel, closely followed by a 1st place finish for the Del Monte Trophy at the Pebble Beach road races in April 1955. At the end of the 1955 season, 0510 M was sold to brothers Richard “Dick” Hall and Jim Hall, who continued to campaign the car to strong finishes through 1956, including 1st overall at Pebble Beach with Carroll Shelby at the helm.

Prior to the start of the 1957 season, Jim Hall purchased the car outright from his brother, continuing to successfully race the car, mainly in his home state of Texas. After its retirement from the racing scene, 0510 M remained carefully preserved in storage with Hall for nearly 40 years, before being expertly restored in the mid-1990s. This process saw the car return to its former glory, including its recognizable blue and white livery. It has since been a popular sight at various car events around the country, including the 1997 Monterey Historics, where it appeared as part of a tribute to Carroll Shelby, and later, the 2005 Pebble Beach Concours d’Elegance, where it was part of a special display honoring Phil Hill and Sir Stirling Moss.

Offered complete with its original drivetrain, 0510 M comes to market following an incredible 60 years in the ownership of Jim Hall. Monterey is considered a highly fitting location for the car’s sale following its earlier success at the Pebble Beach road races, and display at some of the area’s most prominent car events (Est. $4,000,000 - $5,500,000).

“A fantastic piece of motorsport history, chassis 0510 M is likely the most original 750 Monza in existence; its provenance and importance are second to none,” states Jack Boxstrom, Car Specialist, RM Sotheby’s. “While many four-cylinder Ferrari sports racers fell to the crucible of motorsport or general neglect following their racing careers, this particular example has been incredibly preserved. It’s highly successful competition history—which includes three legends of American racing—coupled with its superb condition, and the fact it is offered directly by its owner of 60 years, no less, one of the drivers who campaigned it in period, place it in a class of its own.”

The American-raced Monza will be joined at RM’s Monterey sale by another stateside performance legend with its roots in racing and Carroll Shelby behind its success; the 1966 Ford GT40 Mk I, chassis no. P/1057. Ferrari had long-dominated the racetrack, and after a failed bid to acquire the Italian manufacturer, Ford’s desire to dethrone the vaunted Scuderia was only heightened. Ford did just that in 1966, with the Ford GT40 campaigned by none other than Shelby American claiming victory at Le Mans for four consecutive years.

When the GT40 entered Mark I production, 50 examples were required to meet FIA homologation, 31 of which were destined for the street. Chassis no. P/1057 was born a road car and has remained so ever since, though the specification implies little drop-off in performance from its racing siblings. Elevating its rarity, the featured GT40 was one of 20 cars allocated to Ford’s Promotion and Disposal Program when new, and one of seven road cars consigned to Shelby American for retail.

Originally sold to Nick Nero of Kansas City, Missouri, P/1057 spent the better part of its first decade as a daily driver under a handful of private owners, before entering hibernation in the early 1970s. In 1984, the car was acquired by well-known and highly respected GT40 restorer Robert Ash, who undertook a thorough, exacting restoration, right down to cleaning up the factory-issued hoses and spark-plug wires, and reconditioning the original carburetors and unusual competition-style 180-degree crossover exhaust. After appearances at several niche events, P/1057 was sold to its current gentleman owner in 1991, and has since been carefully maintained as part of one of the most astute collections in the U.S., the vendor thoroughly enjoying using the car as it was intended—on the open road. With single ownership for the past 25 years and having never been offered publicly, this exceptional GT40 comes to Monterey recently serviced for continued roadworthiness, including a rebuild of its original engine (Est. $3,250,000 - $3,750,000).

“The GT40’s caretaker of the last quarter century attests to the fact that while rated at 400+ hp, the car’s legendary Ford V-8 engine actually develops closer to 425-450 hp. It comes on strong up until 3,000 rpm, after which its race-bred pedigree really shows,” says Shelby Myers, Car Specialist, RM Sotheby’s. “A truly exhilarating drive, its next enthusiast owner won’t be disappointed when they get behind the wheel.”

The 750 Monza and the GT40 Mk I join an exceptional roster of 100 blue-chip collector cars slated for RM Sotheby’s 2016 Monterey sale. A tradition spanning more than 30 years, the annual RM auction returns to the Portola Hotel & Spa and Monterey Conference Center, August 19-20 during the Pebble Beach Concours d’Elegance week. For further event information and to view a frequently updated list of all entries for the sale, please visit www.rmsothebys.com or call +1 310 559 4575.