For most motoring enthusiasts just mentioning the words “California Spider” stir up emotions of la dolce vita and the finest motoring experience that one can imagine. The car featured incredible drop-top styling by Pininfarina and Scaglietti, a sumptuous Colombo 3.0-litre V-12 engine, space for two plus their luggage, and race-bred performance, and it was adorned with a Prancing Horse on the front—what could be better?

In the late 1950s, Luigi Chinetti and John von Neumann, Ferrari’s two U.S. distributors, both realised that a convertible version of the 250 GT Berlinetta Tour de France would sell well in the United States, as clients desired the performance of the TdF yet yearned for the excitement that a convertible provided. The California Spider proved to be a success, and as Ferrari updated the 250 GT Berlinetta to ensure that it remained competitive in motorsport, it was only natural that the California Spider received a similar set of upgrades.

The biggest difference between the original California Spider and the newer series that had first been shown at the Geneva Salon in March 1960 was the change in wheelbase. In an effort to improve handling and increase the car’s cornering speeds, the wheelbase was reduced from 2,600 millimetres to 2,400 millimetres. Through utilising the newer Tipo 168 design with new heads and larger valves, the engine was now reported to produce up to 280 horsepower. Additionally, the track was wider than that of the outgoing California Spider, and the car’s lever-type shock absorbers were replaced with newer Koni adjustable and telescopic shock absorbers. Braking was transformed by the inclusion of four-wheel Dunlop disc brakes, and the SWB California Spider became the contemporary of the legendary 250 SWB Berlinetta.

In 1961, a gentleman driver could drive his California Spider to the race track, easily outrun comparable Aston Martins and Jaguars, and drive home again in the early evening with the top-down and in utmost comfort. The car’s dual-purpose nature appealed to many well-heeled individuals, and SWB California Spiders were owned by film stars, such as Alain Delon, James Coburn, and Roger Vadim; European aristocracy, including Vittorio Emanuele of Savoy; and even racing drivers. Jan De Vroom campaigned his SWB California Spider at both the 1960 24 Hours of Le Mans and the 1961 12 Hours of Sebring, where he finished 12th overall, which is an incredible result for a street-legal convertible.

Whilst the majority of California Spiders were delivered new to the United States, a handful of cars remained in Europe, and such was the case with chassis 2505 GT. The chassis was completed in February 1961 and by 22 July of that year, its engine had been built, tested on the dyno, and the car passed on its first run. The car was completed by the factory on 25 July 1961 and finished in Grigio Conchiglia (16249 M) over a Pelle Blue (VM 3087) interior. It was the 18th of a grand total of 56 SWB California Spiders built, but just the fourth of sixteen examples finished with open headlights. According to the factory build sheet, the car was fitted with Pirelli tyres and an 8x32 rear axle with a limited slip differential upon delivery.

According to the red Ferrari certification binder that accompanies the car, it was delivered new to Gastone Crepaldi S.a.S., the official Ferrari dealership in Milan, Italy. The 250 GT was then sold by Crepaldi to its first private owner later that year. By the late 1960s, the car was residing in Rome and had been refinished in classic Ferrari red over a beige interior.

Chassis 2505 GT remained in Italy until 1974, when it was purchased by Karl Mösch, of Uitikon-Waldegg, a suburb of Zürich, Switzerland. Mösch would go on to own the car for over 20 years, and he used it in various events with the Bugatti-Ferrari Owners Club Switzerland throughout his tenure. In 1997, the car was sold to a well-known collector in the UK, and later that year, it was sold again to Karl-Gustav Diederichs, of Remscheild, Germany. In his ownership, the car was restored by Uwe Messiner’s Modena Motorsport Ltd., of Langenfeld, Germany. Diederichs continued to use the car in the same fashion as Mösch. For the next few years, the Ferrari was seen at a handful of events in Germany and Italy, including at Villa d’Este in 2004.

In 2007, shortly after its acquisition by its current owner, chassis number 2505 GT returned to Ferrari’s facilities in Maranello, where it was subjected to a complete restoration by Ferrari Classiche. During the restoration, all mechanical systems were fully re-built and it was refinished in the stylish shade of Blu Scuro over a Pelle Beige interior. At the same time, the car also received Ferrari Classiche certification, confirming that it is fully matching numbers and correct throughout. As one would expect, the standard of the restoration, the correctness of the finishes, and the panel fit are second to none, making this one of the very finest and most authentic examples of the model in the world.

Following the completion of the restoration in 2010, the California Spider’s first concours outing was at the Ferrari Challenge World Finals in Valencia in 2010, where it was driven on the parade lap by none other than Ferrari President Luca di Montezemolo. Following this, it was shown at the Cavallino Classic in January 2011. The car’s breath-taking restoration was clearly very well-received by the judges, as it received a Platinum award and won the coveted Ferrari Classiche Cup for being the finest Classiche-certified Ferrari entered for judging. It also received a Mention of Honour at the 2013 Concorso d’Eleganza Villa d’Este. Beginning in April 2014, chassis number 2505 GT was displayed at the Museo Ferrari in Maranello as a part of the California Dreaming exhibition, which celebrated Ferrari’s 60 years of history in the United States.

As the most celebrated open-air Ferrari ever made, the 250 GT SWB California Spider is an automobile with few peers. Ownership of such an automobile, both now and when new, is something that almost every Ferrari enthusiast aspires to yet something that few can attain. It is the epitome of la dolce vita in the automotive world, as it combines timeless style with incredible performance, and it is an automobile equally capable of pleasing its owner on the open road, the race track, or both in a single day.

Chassis number 2505 GT remains ready and eligible for display at all of the world’s most prestigious concours events, where it would be welcomed with open arms. As a European-delivery example with open headlights, 2505 GT is a rare sight in the realm of SWB California Spiders, and it is truly stunning to behold. It is accompanied by a full set of tools, as well as ASI and FIVA documentation, and has received a restoration and full certification by Ferrari Classiche. This car drives beautifully, looks absolutely spectacular, and is ready to delight its next owner.

It would be an excellent choice for an open-air jaunt to Portofino for the weekend. 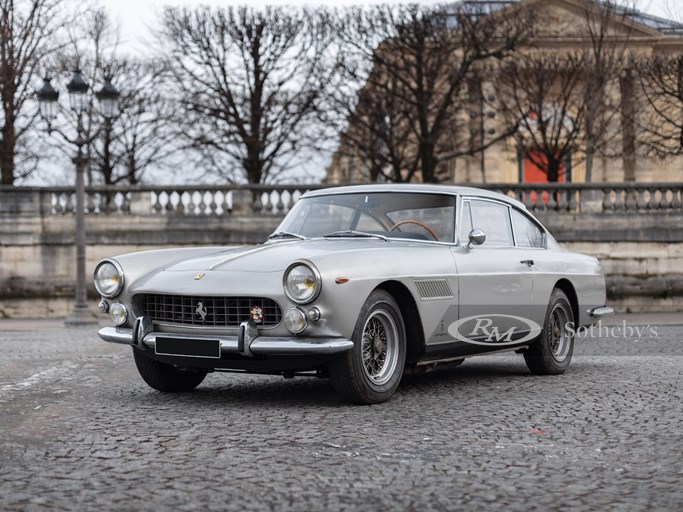