The Ferrari SA Aperta was built to commemorate Pininfarina’s 80th anniversary as a design house and to celebrate a partnership which had produced some of the finest road cars to be adorned with the Cavallino Rampante badge. Production was limited to just 80 examples, which were all pre-sold by invitation only to Ferrari’s most loyal customers before the first car was shown at the Paris Motor Show in 2010. The name “SA Aperta” was as much about its convertible configuration as it was an homage to both Sergio Pininfarina and his son Andrea, both of whom were made honorary chairmen of their eponymous company in 2006.

The car itself was a roadster variant of the extremely potent Ferrari 599 GTO—making it a successor to the 575 Superamerica and a continuation of Ferrari’s tradition of building limited-run variants of its flagship V-12 front-engined berlinettas. Being based upon the 599 GTO, rather than the 599 GTB, meant that the SA Aperta received the full-fat Tipo 140 V-12 engine, with its superfinished cam lobes, re-profiled crankshaft weights, and motorsport-style piston skirts. The numbers produced by this masterpiece of Italian engineering speak for themselves: 661 brake horsepower at 8,250 rpm, good enough for a top speed of 208 mph, with an accompaniment of one the finest soundtracks ever bestowed upon a road car. In addition to the engine, the SA Aperta was also treated to the 599 GTO’s fettled gearbox, capable of delivering shifts in 60 milliseconds—40 milliseconds quicker than the GTB.

Where the GTO and SA Aperta differ, however, is in their dynamic setup and visual appearance. Whereas the GTO was designed to be the most aggressive V-12 Ferrari of its generation, with the sole raison d'être of attacking lap times and offering gentleman drivers a true taste of Ferrari’s motorsport capability, the SA Aperta was intended to be the most delectable open-topped GT that Ferrari could produce. The windscreen was therefore given a steeper rake to make the car sleeker in profile and the flying buttresses, which had adorned the C-pillars of the 599 GTB and 599 GTO, were changed into aerodynamic fins that were integrated into rear roll bars that shadowed the seats.

The car’s lowered suspension was also set up to be slightly more compliant, in recognition that the SA Aperta was more likely to spend its time on the finest driving roads in Europe, rather than attacking apexes at Monza, Misano, or Imola. The finishing touch to the incredibly beautiful package came in the form of bespoke 20-inch lightweight alloy wheels, themselves the epitome of unstated elegance.

This example was delivered to its first owner in Sweden in 2010 and specified in the beautiful combination of special-order Nero Stellato paintwork with Beige leather interior. The stunning cabin is bedecked with optional extras that include carbon fibre bucket seats and a carbon fibre and leather dashboard, as well as bespoke instrument cluster featuring a Bianco-backed tachometer. The secondary trims and paddle shifters are matching Nero Stellato. The cabin also features factory iPod connectivity.

On the outside, the paintwork is complemented by Scuderia wing shields, whilst the A-pillars and wing mirrors are painted in aluminium grey. Anthracite wheels and contrasting giallo callipers complete the specification. Worthy of special mention is that this example is also one of just fourteen that are believed to have been specified with the optional, removable, carbon-fibre hard top from the factory—an extremely expensive and equally desirable extra.

As one would expect with a car of this calibre, servicing has always been carried out by Ferrari Main Dealers. Ferrari Autoropa cared for the car in both 2013 and 2014, and it had visits to Ferrari Basel (Niki Hasler) in 2015 and 2018. Its current keeper acquired the car in 2019 and treated it to its most recent service, which was carried out by Modena Cars of Plan-les-Ouates in December of the same year. The car has covered less than 250 kilometers since this work was completed and it presents beautifully even to the most discerning eye, both aesthetically and mechanically.

The Ferrari SA Aperta is car that has only become more desirable since its launch in 2010. Its perfect blend of elegant looks and extreme performance from a naturally aspirated V-12 powertrain offers a combination that is approaching extinction in the current automotive world. Combine with this with the model's scarcity—and the enviable specification of this example—and there is little to suggest that its desirability will not increase into the future. 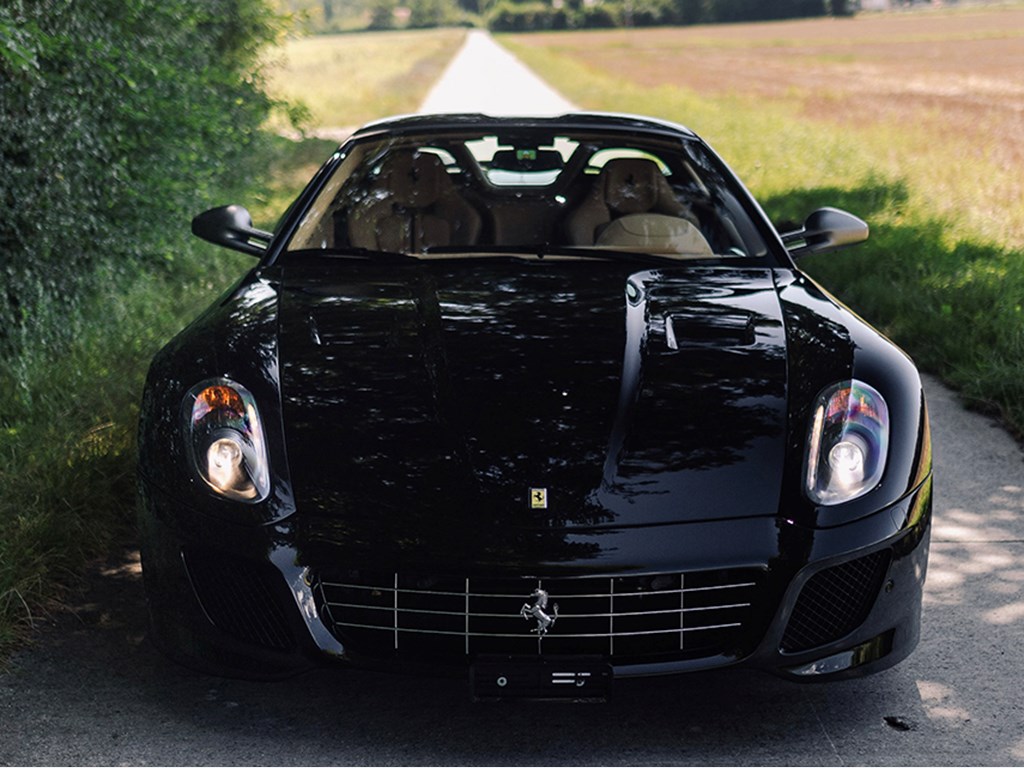 This uncommon open-air Ferrari is made even more desirable thanks to its optional extras.