Ferrari’s sports-prototype racing cars are among the most legendary in motorsport history as they epitomize the desire, passion, and mechanical brilliance that the Maranello team could bring to bear on the track. Most significantly, each and every design had Enzo’s personal handprint upon them.

However, some cars are more special than others, and it is the Works cars that are considered the “Holy Grail” of Ferrari motoring. These iconic cars were on the frontline, the weapons of choice—the sharpest in the armory. They would carry the hopes and prayers of not only the Factory but also of Italy itself and would only be driven by the finest in the world. The Works Ferrari Prototypes were campaigned in the World Sportscar Championship with enormous success, on the greatest, most challenging, and most important circuits that today still provide the foundation and heritage of motorsport as we know it.

The 290 MM was built to contest the World Sportscar Championship, which was as important and carried as much weight to Ferrari as his efforts to win the Formula One World Championship. The WSC was inaugurated in 1953, and Ferrari was immediately successful with championship wins in 1953 and 1954. However, in 1955, the goalposts moved in staggering style as the Germanic efficiency of Mercedes-Benz dominated three of the six events, claiming the World Championship in the process. Then, just as Mercedes-Benz retired at the end of 1955, the old enemy Maserati entered a new machine in the form of the fabulous 300S. Ferrari recognized that it needed a new weapon if it was to reclaim its glory.

For 1956, at the suggestion of a returning engineer, the legendary Vittorio Jano, Enzo took the decision to revert to his thunderous trademark V-12 engine after developing various four- and six-cylinder Mondials, Monzas, and 118/121 LMs.

Jano and engineer Andrea Fraschetti created an all-new engine, although it followed the principles inaugurated by Aurelio Lampredi, with an integral block and cylinder heads with screwed-in wet liners. The new engine was shorter and wider than the previous Lampredi designs, with considerable effort being put into the combustion chamber design to improve inlet and exhaust valve function. Additionally, two spark plugs per cylinder were fitted, with the net result being a 40 brake horsepower increase over the similarly sized 860 Monza.

Enzo convinced the best driver of the era, and, for most, arguably the greatest driver who ever lived, the soon to be five-time World Champion Juan Manuel Fangio, to lead the Works team in his latest and greatest creation. With that, so it was that Fangio and the 290 MM came together with the sole purpose of securing the 1956 World Sportscar Championship for the Maranello Scuderia.

In today’s heavily regulated world of motorsport, it is wonderful to reflect on the fact that in the 1950s there were few rules to govern the Works teams in the design of their latest racecars. These wonderful machines were therefore developed to the absolute limit of what was achievable, with no rules governing cylinder capacity or weight. The only limiting factor was the bravery of the driver and his ability to read the road ahead on some of the most challenging events for both car and driver that have ever existed.

One such event was the legendary Mille Miglia.

The 1956 Mille Miglia was held on April 29th and was the third round of the World Sportscar Championship. For this event, Fangio was allocated chassis number 0626, a car that was specifically built with him, and the car offered here today. There were 426 cars entered for the event, of which 365 would start, but only 182 would be classified as finishers.

Juan Manuel Fangio was race #600 and would start last, at exactly 06:00 am, driving solo, with no navigator to call the turns and hazards that led in front. The race was intense from the onset, with the weather immediately deteriorating to torrential rain throughout Italy. The closed cars had a distinct advantage, but the Ferraris were still supremely competitive and would take the top five places with Fangio bringing home 0626 in 4th place overall. A remarkable feat considering the conditions and that he was driving unaccompanied.

Less than a month later, an incredible photo essay by LIFE magazine photographer Thomas McAvoy chronicled the Scuderia Ferrari’s trip from the 1956 BRDC International Trophy of Silverstone right up to its recent domination and victory at the XXIII Mille Miglia. Three cars from the Mille Miglia were featured heavily, but Enzo Ferrari chose to rest against one specific car for the photoshoot, and that car was 0626 (#600), as can be seen pictured here.

The next outing for chassis number 0626 was at the 2nd International ADAC 1000 KM at the Nürburgring, held at the end of May, where it was driven by future American World Champion Phil Hill, Ken Wharton, Olivier Gendebien, and the Marquis Alfonso de Portago. This spectacular roster of drivers finished 3rd overall, but the season was not over, and there were yet more incredibly talented drivers to sit behind the wheel. In July, de Portago once again took the wheel and finished 9th overall at the 5th International Grand Prix of Rouen-Les Essarts in France.

Wolfgang Alexander Albert Eduard Maxamilian Reichsgraf Berghe (Taffy) von Trips was to become one of Germany’s all-time great Grand Prix drivers, winning the Targa Florio and even challenging for the World Championship until his untimely death at the Italian GP in 1961. But, in 1956, he had yet to drive a Ferrari. That was until he convinced Enzo to allow him to get behind the wheel of chassis 0626 at the Swedish GP at Kristianstad, the final race of the World Championship. He was partnered with the dashing Peter Collins, and the pair did not fail to impress with a 2nd place finish, which helped Ferrari secure the 1956 World Sportscar Championship, exactly as Enzo had set out to do.

Nonetheless, chassis number 0626 was not finished as part of the Scuderia’s Worlds Sportscar Championship efforts just yet, forming part of the team that contested the 1957 title. For the opening round of the season, the IV Mil Kilometros Ciudad de Buenos Aires, 0626 was entered in Works livery for the fast American Masten “Kansas City Flash” Gregory, who was partnered by two Ferrari Grand Prix drivers, Eugenio Castelloti and Luigi Musso. These three great drivers raced chassis number 0626 to a famous championship victory, and Ferrari’s 1957 sports-racing campaign was off to a glorious start. This tremendous form would continue throughout 1957, and Ferrari would go on to secure yet another championship.

In spring 1957, chassis number 0626 was sold through Luigi Chinetti to Temple Buell in New York, who had the car repainted blue and white. Buell had many great Ferraris, such as a 750 Monza and 500 TR; most importantly, he was a personal friend of Enzo Ferrari. Under Buell’s ownership, this car continued to compete around the world, including a 2nd place finish in both the VI Portuguese Grand Prix and RACB Grand Prix of Spa-Francorchamps, as well as earning respectable finishes at the Nassau Tourist Trophy and the Cuban Grand Prix, when Juan Manuel Fangio was kidnapped prior to the start of the race by Fidel Castro’s movement. Throughout this season, the car was driven by Masten Gregory, Joakim Bonnier, Paul O’Shea, and Manfredo Lippman.

In March 1958, Temple Buell returned the car to Luigi Chinetti Motors, who sold the car to J. Robert Williams of Miami, Florida. Chassis number 0626 then passed through the hands of enthusiastic American racer James Flynn and continued to be raced up until 1964, maintaining her almost unique record of never being crashed and as such maintaining her level of incredible originality. In 1968, repainted red, the 290 MM was sold to well-known collector Bob Dusek of Solebury, Pennsylvania. Mr. Dusek maintained chassis number 0626 for a couple of years, even using her regularly on the “school run!”

The significance of 0626 can be gauged by the fact that in 1970 she was then purchased by the world-renowned collector Pierre Bardinon for his renowned Collection Mas du Clos in Aubusson, France. Chassis number 0626 was displayed alongside Bardinon’s extensive collection of Ferrari Le Mans winners at the 1987 Cartier Hommage à Ferrari exhibit held near Paris. Bardinon owned this magnificent car for 34 years before it passed to the present custodian, who is one of the world’s most renowned and discerning collectors of Ferrari and its history.

For the past 12 years, chassis number 0626 has been regularly maintained, benefiting from a recent engine rebuild. The provision of a removable passenger screen has also allowed her to comfortably compete in the Mille Miglia Storica, and she has run at various historic events as well as been displayed at the Goodwood Revival Meeting and the remarkable inaugural Windsor Concours of Elegance. The owner has had the car Ferrari Classiche certified to further confirm its stunning originality.

Works Ferrari sports-racing cars of the 1950s are rare in their own right, but one with such heritage and degree of originality is almost unheard of. In May 2016, Fangio’s epic drive in the Mille Miglia 60 years beforehand will be celebrated once again in Brescia. Chassis number 0626 surely stands to capture the hearts and admiration of all who appreciate this unique and original example of a Factory Prototype, created by the world’s greatest racecar manufacturer for the world’s greatest racing driver. 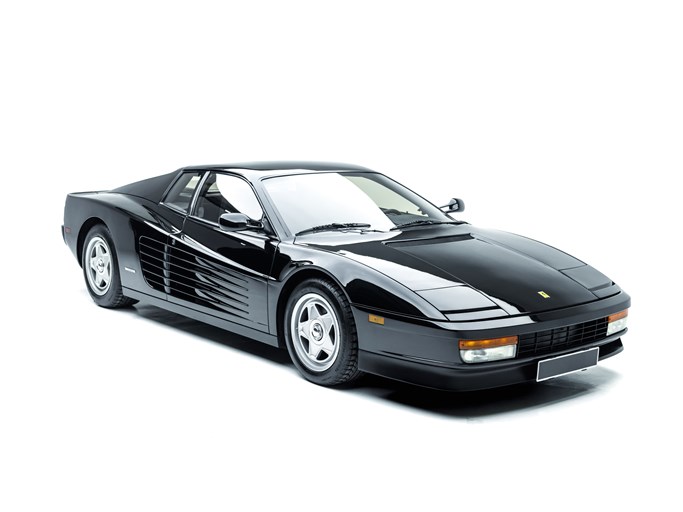