Addendum: Please note that a reserve has been placed on this lot.

Harley Earl fathered the modern automotive styling studio. The visionary move of placing an artist in such a position established General Motor’s design dominance, and the practice of an artistic styling department soon became the industry norm.

The “da Vinci of Detroit,” as he was referred to, enjoyed a successful career as a coachbuilder in California before Lawrence Fisher coaxed him to the Motor City, where Alfred P. Sloan, the head of GM, created the industry’s first Art and Colour Section and named Earl as its director. The move must have been met with immediate opposition, as American car companies that produced motor cars en masse did not give much thought to in-house body design. Earl, meanwhile, was a proponent of clay modeling to envision future production cars, and he introduced the modern concept car as a means of testing the industry waters. His career skyrocketed, and by 1941, Earl reigned as the arbiter of taste and style in Detroit.

Earl’s Art and Colour Section created this one-off Cadillac as an individual work of automotive art for two of the 20th century’s most renowned social figures: a king and the woman who could have been his queen.

THE DUKE AND DUCHESS OF WINDSOR

Theirs became one of the most famous love stories of all time. Never before had a king given up his throne for a woman he loved. Edward VIII, King of Great Britain, Ireland, and the British Dominions, and also the Emperor of India, abdicated his throne on December 11, 1936, to marry Wallis Simpson, an American socialite from Baltimore. Henceforth, the couple became known as the Duke and Duchess of Windsor, and they embarked upon nearly 40 years of international jet-setting amidst the world’s most prominent people.

Edward VIII defined gentlemanly style. His clothing, pastimes, and habits were copied the world over, and his influence still reigns today, with men tying a “Windsor knot” in their neckties. Likewise, Wallis topped the international best-dressed list for decades, and her taste in jewelry and clothing captured the imagination of the world’s most famous designers.

During their first stay in late 1941 at the Waldorf Astoria hotel, where the couple kept a suite, the Windsors were greeted by adoring crowds. They also received a car from one of their society friends, Alfred P. Sloan Jr., the chairman and CEO of General Motors. It would carry them to the Empire State Building and through a ticker tape parade down Wall Street. The New York Times dubbed it a “glossy new Cadillac.” It was so much more. Delivered in the waning days of old coachbuilding and the Classic Era, “The Duchess,” as it became known, was one of the final, truly one-off, coachbuilt Cadillacs, as well as one of the most famous Cadillacs ever produced.

Not a single body panel on the Windsors’ car matched any other 1941 Cadillac. The hood, trunk, fenders, fender skirts, roof, and doors were all crafted by hand, and all interior appointments were hand-fitted.

The fenders were, and remain, the car’s outstanding feature. Beginning with a crest over the wheels, they extend and fade through the back of the body, forecasting Hooper’s future coachwork on Rolls-Royce. The streamlined appearance was so sufficiently striking that Buick would borrow the basic style of the design for its 1942 production models.

The car’s custom roofline, which dips between the windows to form a wide center post, would appear on the production 1942 Cadillac Series 60 Special. Other unique exterior features included the Windsors’ “W.E.” monogram and crown to the rear doors, unique stainless steel rocker moldings and drip rails, blacked out headlight and fog light trim rings, and the deletion of most chrome and excess emblems. On this car, Cadillac’s iconic Goddess hood ornament was plated in gold.

Inside, the car was upholstered entirely in rose-colored custom broadcloth, extending even to the headliner and sun visors. The floors were covered in Wilton wool carpet, which were custom-dyed to match the broadcloth. Conveying the car’s ideal combination of masculinity and femininity, these light colors were set against custom-finished walnut cappings for the doors, cabinetry, and divider window. Four brushed stainless-steel jewelry cases, each of them lined in velvet, served to carry the Duchess’s prized jewelry, and two custom lighted mirrors were hidden in the cabinetry. For the Duke, there were no fewer than three cigar lighters and two ashtrays, as well as a humidor and a custom rack for his favored Sasieni pipes.

This was one of the first Cadillacs to be equipped with power windows, with the side glass hydraulically operated, and an electric center privacy divider. All windows were equipped with satin privacy curtains, which rolled away when not in use, and the door handles and vent window cranks were crafted of Lucite.

As the Duke was a well-known enthusiast of automobiles and aircraft, Cadillac expected that he would take the wheel of this car on occasion. As a result, unusually for a limousine of the time, the front compartment was detailed to be as elegant and opulent as the rear, including its own radio, with a manually controlled roof-mounted antenna and buttons preset to New York City AM stations of the era. The custom rear radio, shrouded in solid copper, employed a vacuum-powered antenna, which could be raised or lowered with the touch of a chrome knob on the rear seat armrest.

Reportedly, even the Cadillac’s mechanical components were individually selected from the factory, to be the best of the best and to assure reliability and smoothness of operation. This car came from the factory with nearly every advanced feature that General Motors could offer in 1941. There were sealed-beam headlights with body-color lenses, safety glass, fully automatic heating, directional signals, power windows, power antenna, hydraulic brakes, independent front suspension, automatic thermostat shutters, ride stabilizers, and a fully automatic Hydra-Matic transmission.

According to Roy Schneider’s Cadillacs of the Forties, the Duke of Windsor paid an astonishing $14,000 for the completed one-off creation, which was an extravagant sum in 1941. He would use this Cadillac for 11 years. During that time, “The Duchess” was often photographed with the couple, appearing regularly in newspaper clippings and newsreels.

In 1952, the Duke traded the Cadillac in for a new Cadillac Series 75 and Buick station wagon. It was resold by General Motors to Charles Beswick, a noted dealer of luxury cars in Springfield, Massachusetts. The Springfield Daily News reported on the transaction in its July 17, 1952, edition, stating that the car showed 19,246 miles, and it gushed that its finish looked “twice the quality of newer cars.”

Beswick resold the Cadillac to early collectors Vernon and Bevline Bradley, of Springfield, who added some 50,000 miles before selling it through a New York Times advertisement in 1964. William J. Edmonds III, a Cadillac collector from Fort Worth, Texas, was the new owner, and he maintained the car in storage until its acquisition by the present owner, Morgan Murphy, in 2009. At that point, the process of extensively documenting and then restoring the long-lost “Duchess” began.

Today, following a nut-and-bolt restoration that involved many specialists, the car operates as it did originally. The six-volt starter gently fires the V-8 to life, without the aid of modern fuel pumps, and the engine idles at a near-silent 400 rpm; it is so quiet that one can only hear the fan blades. The 90-degree crankshaft and harmonic balancer, along with cylinders balanced down to .005 grams, gives the Cadillac unprecedented smoothness.

As with all aspects of the Cadillac’s restoration, the chassis and mechanical components were finely detailed. The wheels are shod in Firestone wide whitewall tires, as originally specified for this car, and the original tags hide behind the seat cushions. Even the light bulbs have period-correct markings, and the electrical components, which are properly serial-numbered, have cloth-covered wire. The clocks, radios, windshield washers, heating systems, fans, and lighting all use original mechanisms and bulbs. Even individual screws and bolts were saved whenever possible, and then they were replated, restored, and positioned back into their original holes. Whenever possible, original parts were used, with new old stock components being the next best option, followed by having parts recreated from scratch.

“The Duchess” is accompanied by copies of original historic photography, showing the Cadillac as it was freshly completed. General Motors extensively photographed the car prior to delivery in 1941, both in the studio and in front of 854 Fifth Avenue in Manhattan, showing the car’s custom bodywork and interior fittings in exquisite detail. Also accompanying the vehicle are copies of its original build sheets, showing the car being accounted to “A.P. Sloan Jr., New York, N.Y.” and that its construction was handled by the factory engineering department. The car’s data tag on the firewall, engine number, and frame number all match the original build sheet. Lastly, the car comes with a copy of the 1952 New York State title, which bears the Duke’s signature, address at the Waldorf, and the car’s serial number.

“The Duchess,” built in the Harley Earl era, is a fully unique, one-off commission by General Motors’ legendary leader for the cream of 1940s society, and it is so more than a car. It is a part of New York City social history, and it is a bespoke design that is as tailored to the style of its original owners as their legendary wardrobe. 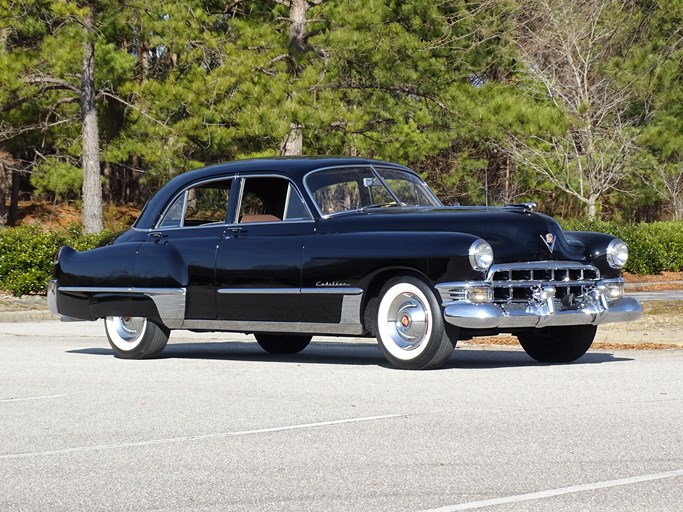 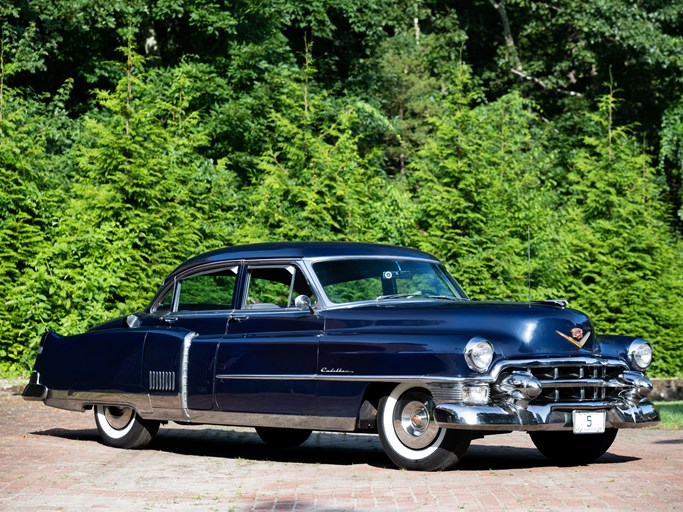