The name Shelby has been synonymous with Ford and the Mustang since 1965. Shelby’s performance and styling modifications created one of the greatest muscle cars in American history, forging an automotive legend in the process. The legend was revived in modern times with great success: Carroll Shelby and the Ford Motor Company partnered in an effort to make fast cars together once more following the introduction of a capable, retro-styled new Mustang for 2005. Soon, Shelby began producing a string of special, limited-production, high-performance Mustangs, each with its own personality and purpose—but each with the unmistakable Shelby soul. This stunning 2011 Shelby GT350 is a superb example of that effort.

Just like the original, which was a lightweight pony car with V-8 power, the 2011 GT350 honed its performance edge with input from Ford Racing, Goodyear, Borla, Cragar, and Baer. The standard package includes a 535-horsepower supercharged 5.0-liter V-8 mated to a six-speed manual gearbox with a center-exit Borla exhaust. This car features the highly desirable optional R-Tune package; with this upgrade, the supercharged engine produces a scorching 624 horsepower. Additionally, it is equipped with the factory high-performance cooling package. The suspension features Ford Racing springs, struts, anti-roll bars, and adjustable caster/camber plates.

The 2011 Shelby GT350 rides on 19-inch Cragar wheels shod with Goodyear tires. The Baer brakes feature six-piston front calipers and 14-inch EradiSpeed rotors in the rear, along with cooling ducts for all four corners. Appearance items include a new front fascia, taillight trim, a front splitter, rear fascia, and functional scoops on the side rockers and hood, as well as optional Guardsman Blue full racing stripes. Inside the cockpit, on the A-pillar are instruments for fuel pressure, oil pressure and supercharger boost. The great heritage of Shelby cars is enhanced by Mr. Carroll Shelby’s signature on the passenger side air bag cover.

This exciting Performance White GT350 appears in as-new condition with the original Shelby window sticker and fewer than 100 miles on the odometer at time of cataloguing. Here is a rare chance to own a piece of Shelby heritage that can be easily driven and enjoyed. 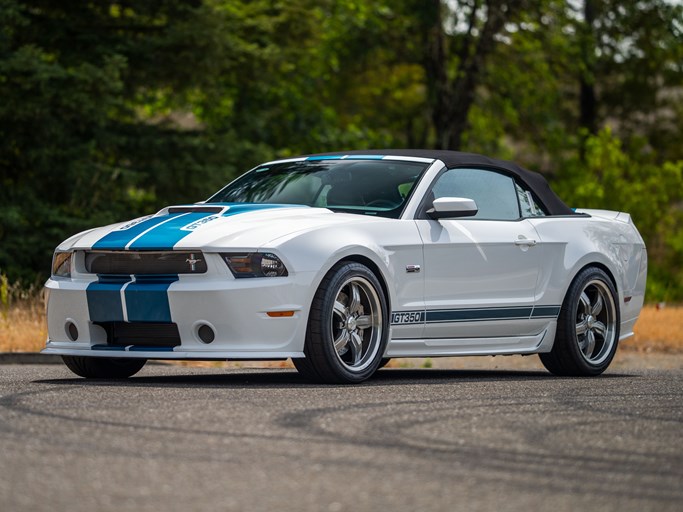