Image from Collections of the Henry Ford
Lot 264

The ambition of the Continental Division, the post-war Ford Motor Company marque spearheaded by William Clay Ford, was belied by the simplicity of its mission brief: Build the best luxury flagship available, regardless of cost. Continental’s sole offering, the Mark II, was indeed a car for the ages. Its many attributes included handsome-yet-understated Midcentury styling by John Reinhart and Gordon Buehrig; impeccable, hand-fitted build quality; and, famously, a $10,000 price tag that made it the most expensive car produced in America at the time.

The Continental model range was originally intended to include a four-door limousine and both fabric-top and hardtop convertibles. Unfortunately, the program’s exorbitant costs and the Mark II’s limited volume meant only the two-door sedan reached production (although the retractable hardtop program did lead directly to the marvelous Ford Skyliners). This 1956 Continental Mark II Convertible, commissioned by the Ford Motor Company when the prospects of a production version were brighter, is a breathtaking look at what might have been.

The execution of the Mark II Convertible design was tasked to the Derham Body Company of Rosemont, Pennsylvania, a grand American coachbuilder of the first order. No mere chop job, Derham’s carefully considered build incorporated a fully functional convertible soft top without compromising the Continental’s stunning profile. By October of 1956 the car, initially finished in white over a white and red interior, was ready for its dazzling debut at the Texas State Fair; appearances at shows across the United States followed.

The immense appeal of the convertible design, as elegantly realized by Derham, was obvious. Yet the discontinuation of the Mark II after the 1957 model year, and the reincorporation of the Continental marque into Lincoln, precluded its production. This prototype, the sole example to be built for Continental by the prestigious Pennsylvania coachbuilder, was all that remained of the promising idea.

After its time in the spotlight, this unique Mark II was acquired by Martha Firestone Ford—granddaughter of tire magnate Harvey Firestone and wife of William Clay Ford—for her personal use. Before she took ownership, the car was upgraded to the latest 1957 mechanical spec. A new dynamically and statically balanced 300-horsepower, 368-cubic-inch V-8 was installed, along with a new transmission and new-for-1957 Directed Power limited-slip rear differential, and it was refinished in sky-blue over a white and blue Bridge of Weir leather interior. A new black convertible top, along with complementary black Mouton carpets, was fitted, and a special plaque was affixed to the transmission tunnel to note its illustrious ownership.

Mrs. Ford eventually had the Continental repainted in a dark metallic blue-green (the 1957 interior remained intact), then relinquished the car. A sharp-eyed Ford engineer, Bob Wagner, is said to have spotted it in the automaker’s car resale system, eventually acquiring it for himself. Not long after, however, Wagner was instructed to sell the Mark II: Apparently, William Clay Ford had previously promised the car to another interested party, and it going to a Ford employee threatened to create an embarrassing situation for the executive!

Recognizing its significance, Wagner wanted the Continental to go to a dedicated enthusiast of the marque, and by late 1961 a deal was struck with Walter W. Goeppinger. For the Mark II Convertible, Goeppinger would trade his award-winning 1947 Lincoln Continental, plus $5,000. The transaction was completed in May 1962, and the ensuing six decades of Goeppinger family stewardship has proved the wisdom of Wagner’s choice.

Under the care of Walter Goeppinger and his two sons, this cherished Mark II has always benefitted from scrupulous care. Returned to its appealing sky-blue color following Goeppinger’s acquisition, the car enjoyed a repaint by Anderson Restoration in Kanawha, Iowa completed in 2011. Today, with its sky-blue exterior, blue and white interior with black Mouton carpets, black top, and blue tonneau cover, the Continental looks much like it did when Mrs. Ford first took ownership in 1957.

Befitting its historical importance, this Mark II has been shown and documented extensively over the years, including appearances in Automobile Quarterly, numerous magazines and Lincoln Continental Owners Club publications, as well as Rolling Sculpture, A Designer and His Work by Gordon M. Buehrig. It is offered with an extensive history file assembled by the Goeppinger family, including correspondence with the Ford family and historic photographs.

Now ready for its next caretaker, the Mark II Convertible by Derham is an irresistible opportunity for a collector of notable Continentals and Lincolns. Moreover, this Continental represents an important moment in the history of the American automobile—a moment when the Ford Motor Company set out to build an exquisite luxury car to challenge the world, no matter the cost…and succeeded with flying colors. 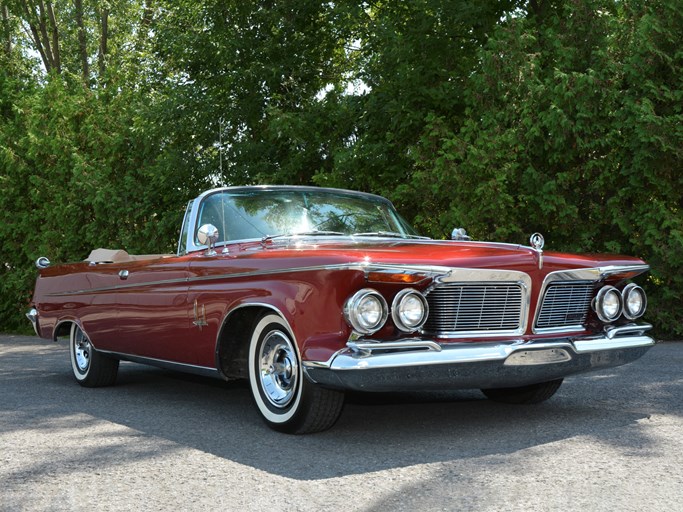