The Bugatti Type 35 is unquestionably among the greatest racing cars of all time, and the Type 43 is effectively its roadgoing counterpart. It is true that in creating the Type 43, which debuted in 1927, Bugatti needed to make some changes; the wheelbase is longer than that of the Type 35, for example. Yet the fundamentals remained—including the supercharged 2.3-liter overhead-cam inline-eight engine. Not coincidentally, the Type 43 was among the first production cars capable of speeds in excess of 100 mph, a remarkable feat at the time.

The Type 43 on offer, chassis 43233, was delivered in chassis form to Stand Auto Garage on the Champs-Élysées in Paris after being invoiced in September of 1928. One month later, the Bugatti received standard Grand Sport coachwork and was registered to its first owner, Robert Senechal. A Delage factory race driver and former manufacturer of cyclecars, Mr. Senechal was exactly the type of esteemed character one would expect to purchase such a fine automobile in the period; in fact, according to a report on file from marque expert Pierre-Yves Laugier, he ordered six Type 43 chassis, apparently intending to become an agent for the marque.

He would soon put this chassis, then wearing temporary torpedo bodywork, to work; he achieved overall victory at the 1928 Rallye de Pau while entered in the lower 2-to-3-liter category, followed by a class win a few days later at the nearby Morlaas hillclimb. Soon after, respected Parisian coachbuilders Lavocat et Marsaud completed a two-seat roadster-style body for the chassis. Photographs on file display this design in its original form with the front wings flowing into the running boards, a folding windscreen, and a rumble seat in the rear.

After the coachwork was fitted in January 1929, the campaign continued at the French Motorcycle Club Hill Climb that same month, with a class win at the Gometz le Chatel hillclimb coming that October. Not long after, the car was sold to an unknown buyer, but in 1932 chassis 43233 entered the ownership of Jean Trevoux. Several months later, he won the Paris to Nice Rally outright with his new purchase. A class win at the La Turbie hillclimb soon followed.

Four additional Frenchman are reported to have taken ownership of the car before the war. Beginning in 1945, Jean Charbonneaux and his family would be 43233’s stewards for just over a decade. Charbonneaux owned a separate Type 43, chassis 43251 with engine number 62, and at some point during his ownership, the engines were swapped. It would be sold to François Claude Pruvot, an engineer, in 1955, before passing to a Parisian mechanic, Jacques Banao, in 1962.

By 1965 the Bugatti had landed on England’s shores, entering the collection of Peter Newens. After being purchased by Franck Wall in 1971, an extensive mechanical and cosmetic restoration occurred. A photograph from the period shows the Type 43 painted in a single shade of dark blue and wearing a plate numbered FGW 27C. Additionally, aluminum cycle-style front fenders had replaced the original swept wings.

In October 1978, chassis 43233 sold at auction in London to the Seydoux Collection in Paris; after exactly 50 years, the Bugatti had returned to its original hometown. The vehicle would remain on the continent after being purchased by Oscar Davis at auction in 1996. Invoices and correspondence from the period show the Bugatti was maintained at a shop in the Netherlands in order to be used at a moment’s notice for a number of European rallies.

Davis eventually sold the car to a New Hampshire gentleman in 2002 but would eventually buy back this wonderful machine in 2007. A year prior to this purchase, the car received a FIA Historic Technical Passport.

Today, the Type 43 is finished in a deep shade of red with a black leather interior, and its Lavocat et Marsaud body offers an attractive, and uncommon, alternative to the more commonly seen Grand Sport coachwork. The exterior is enhanced by its cycle fenders, an aluminum louvered hood, and fixed-rim type wheels. A suite of Jaeger gauges reading water temperature, amperes, engine speed, road speed, and oil pressure complement the finely finished wood dashboard.

The car has been maintained by Leydon Restorations of Lahaska, Pennsylvania throughout Oscar Davis’ ownership. Recent work has included the installation of a new wiring harness, a valve job, a full reseal of the engine including new water plates, and the fitment of a new radiator core by Chuck Niles at American Honeycomb. A report by Pierre-Yves Laugier, outlining this car’s fascinating history, accompanies the sale.

With successful competition history and handsome coachwork, the Oscar Davis Collection’s Bugatti Type 43 can best be described as très extraordinaire—and with approximately 160 examples of this model produced, quite rare and highly desirable as well. 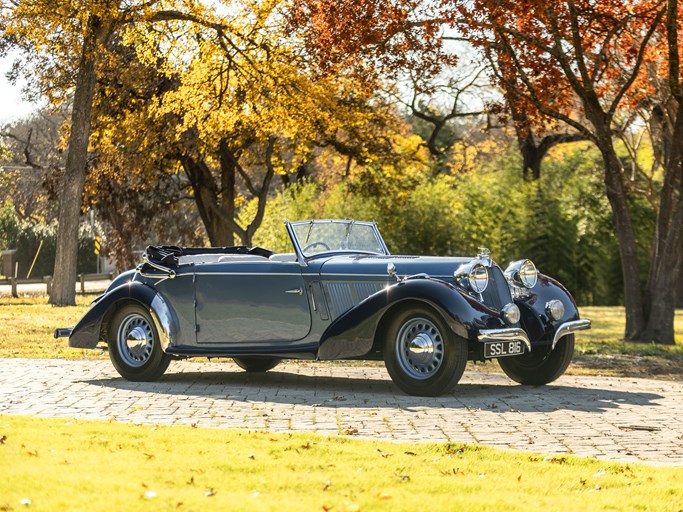