It was a natural that Paul Andrews would be drawn to Aston Martins; the competitive spirit ran strong in both man and marque. His collection included several examples, and it is worth noting that as other automobiles came and went from the stable, the Astons usually arrived to stay. He was a man who recognized quality and rarity, and thus after finally acquiring the best possible example of such a model, he was keen to hold on to it, especially if it proved as entertaining to drive as he had imagined.

Few Astons met the Andrews need more successfully than DB4GT/0168/L. In the fashion typical of the collection, it is not “just” a DB4GT—although even that would have been one of a mere 75 cars, of which just 30 were delivered with left-hand-drive. DB4GT/0168/L is a factory Lightweight, one of nine produced in various versions under the watchful guidance of Aston development chief John Wyer, later of GT40 and 917 K fame. These cars shared the stock DB4GT’s shortened 93-inch frame, aluminum bodywork, and high-compression engine with three Weber carburetors, all crafted specifically to contend with the Ferrari 250 GT SWB in competition. They improved upon these specifications, however, in being more featherweight still, with a body of even lighter-gauge aluminum (now including the floorboard), roll-up Plexiglas windows, and drilled suspension brackets, all of which eliminated about 150 pounds and made the car an almost perfectly even power-to-weight match for the 250 GT SWB. It was a case of perfectionist engineers admirably taking a second look at a car that was “more than good enough,” and making it fight its strongest competitor at literally equal weight.

Respected Aston historians Stephen Archer and Richard A. Candee’s standard reference work on the model, The Aston Martin DB4GT, confirms that DB4GT/0168/L “had a lightweight chassis” and was one of the original, correct lightweight cars; the last and only left-hand-drive example of the first five Lightweights built; and one of only three left-hand-drive cars built to the true Lightweight specification. Both the Certificate and cards from dealer J.S. Inskip, also on file, note further specification with two racing-type bucket seats, high-compression engine, and, most significantly, the lightweight exhaust system and manifold, and lightweight road springs. The original engine number was 370/0168/GT, equipped with three Weber 45 DCOE4 carburetors, and the gearbox number S.432/3/500, both of which remain present today. Completed on 6 February 1961, the car was built as a left-hand-drive example for North American export, finished in Peony with Black Connolly leather trim.

An article on this very automobile, written by Ted West and published in the March 2003 issue of Vintage Motorsport, notes that “DB4GT/0168/L was ordered by the handlebar-mustachioed head of Aston Martin’s North American operations, Rex Woodgate, to race at the 1961 Sebring race. Alas, U.S. Customs took an overly great interest in it when it landed. It was not released until the Monday after Sebring, making it a bit like a Cinderella who never found the magic slipper.” Archer and Candee quote Woodgate, however, a man who was there, as noting that the original intended customer had simply not come through with payment for the car in time. Nonetheless, it is a good story, and West’s closing comment still stands: “We can be grateful for this bad fortune, however, because the car was then sold as a touring car, escaping the tin snips and ball-peen hammerings that 12 hours at Sebring often dictate.”

The original private owner, H.P. Berger of Gypsy Hill Road in Gwynedd Valley, Pennsylvania, kept the car until 1965, when he sold it to Ed Nisbet of Stamford, Connecticut. Nisbet, in turn, sold the DB4GT in 1969 E.R. Coyle of Sewickley, who maintained it another several years before passing it to Major Douglas H. Necessary of Hopkinsville, Kentucky, in 1975. Major Necessary retained the Aston until 1984 when he sold it to Charlie Turner.

Charlie Turner is a significant figure both in the history of Aston Martin in America, and in the tale of chassis no. DB4GT/0168/L in particular. Proprietor of the Import Service & Restoration Company of Marietta, Georgia, Turner at one time was Aston Martin’s oldest dealer franchisee, and also served as longtime chairman of the Aston Martin Owners Club in the U.S. He was a great enthusiast of the DB4GT, with Archer and Candee noting that he owned three of the cars within a 25-year period. He sold DB4GT/0168/L back to Major Necessary in 1987, but in 1989 bought it back; Archer and Candee comment that Turner “coveted 0168/L because of its factory lightweight status and always said that it was his favorite.” He began a full restoration of the car, beautifully refinishing the original body and meticulously rebuilding the chassis and suspension. The engine and drivetrain had yet to be installed, however, when Turner passed suddenly in 1990, and thus the project, almost complete, stopped in its tracks.

DB4GT/0168/L remained in the Turner estate until 2001, when vintage racing stalwart Jack Boxstrom, himself also a former chairman of the Aston Martin Owners Club, succeeded in acquiring the car following several years of heartfelt pursuit. Over the next two years Jon Clerk of Steel Wings, the highly respected Aston Martin service and restoration facility in Ivyland, Pennsylvania, restored the car anew, meeting Boxstrom’s focus on producing a car that would be very successful on both road and track, including fitting a roll bar and “blueprinting” the original engine; at some point, glass door windows were also fitted. West’s 2003 article wryly noted that “though strictly within spec, [the engine] makes more power than it ever did on the Customs dock in 1961.” The restoration was done to a proper standard, with items such as the original chassis number plate retained. Afterward Boxstrom had the car classified by the VSCCA and enjoyed exercising it in vintage competition for four years.

In 2007, chassis no. DB4GT/0168/L was acquired by Paul Andrews, and has been enjoyed by his family in the fourteen years since. Much of that enjoyment has been at very high speeds, on events such as the Colorado Grand and the Copperstate 1000, the long-distance rallies at which a DB4GT Lightweight can truly excel. With the sensitivity towards originality that was also an Andrews hallmark, the car completed many of those events with a specially built “rally engine” fitted, preserving the original engine. The rally engine has since been sold and the original engine is back in the car today.

DB4GT/0168/L is an automobile to appreciate, which can be easily viewed from its provenance: Charlie Turner, a man who knew DB4GTs better than almost anyone in modern history, loved it enough to own it twice, and to keep it for the rest of his life the second time. Jack Boxstrom, a man who knows power and speed, loved using it on the track, as its builders intended. Paul Andrews and his family, Aston connoisseurs, savored it on long rallies. It has truly proven its mettle as a superbly engineered all-purpose high-performance automobile, whether on road or circuit, equal in every way to the finest 250 GT SWB that one could imagine...and that was its creators’ idea. 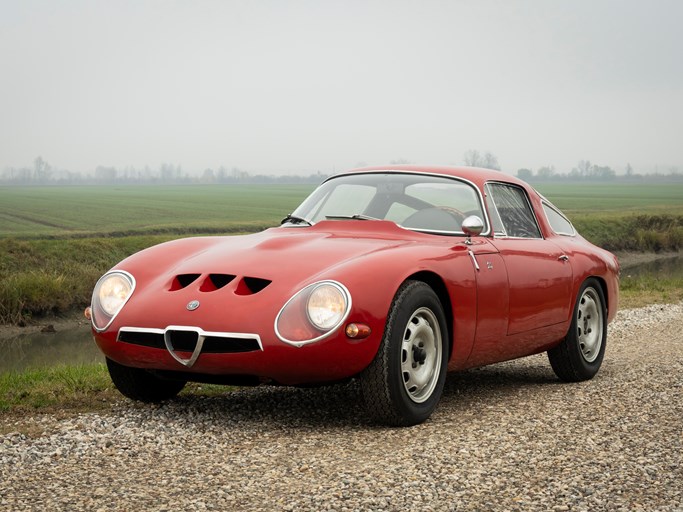