As recorded by former owner Jim Callahan, this Packard Twin Six, vehicle number 587-16 has a known history back to 1948, when it was put into storage under cover on a farm in Fresno, California, when its owner moved back East. It remained in storage until 1963, when the owner sent word to have the car sold. Roy Lagomarsino and his father, Joseph, heard of the Packard’s availability and purchased it for around $1,500 through a sealed-bid auction. Roy Lagomarsino told Mr. Callahan that before trailering the car home to San Francisco, they removed almost every piece of trim hardware from the car, to prevent them from being stolen. The Packard and its trim thus went into dry storage, first at the senior Lagomarsino’s home in San Francisco, then later moving with Roy to his home near Suisun City.

In November 2000, the car came to Mr. Callahan’s attention. In inspecting it, he found it to be still in its original black paint with green leather upholstery. Every piece of trim was in the car, still wrapped in pages from 1963 issues of the San Francisco Chronicle, and the top mechanism was complete, although the top material itself had long since deteriorated away. Mr. Callahan soon decided that this was an outstanding find and acquired the car from Roy Lagomarsino two months later. After Mr. Callahan’s mechanic rebuilt the carburetor and distributor, changed the oil, and filled the radiator, the Packard fired right up—off 1948-vintage spark plugs and original ignition wiring!—and ran and idled quite smoothly, considering it was the first time in 53 years. After further cosmetic cleaning, it was noted that the car originally had double white pinstripes and black wheels matching the body with both having been painted over in apple green at some point, the only real “refinishing” the car had since 1932.

Mr. Callahan proceeded to run the rejuvenated but still original Twin Six about 550 miles, including a round-trip journey from Oakland to Pebble Beach for the concours in August 2001. He soon sold it to the partnership of famed Packard collectors Don Sears and David Kane. It next passed to Tom Kostelecky of Littleton, Colorado, who continued to maintain its original condition, and then to the current owner.

A meticulous restoration began soon after, with much of the mechanical work being handled by well-known Packard collector and specialist, Lonnie Fallin, known for his excellent attention to detail and authenticity. Cosmetics were handled by the respected, award-winning firm of Colour Restorations in Loveland, Colorado. The car was refinished to the original livery, made possible by the survival of so much of the 1932 factory finishes, with the exceptions only of chromed rather than painted wheels and a black top and boot. Significantly, it retains not only its original matching-numbers chassis number 900404 and engine number 900412, but even the steering box, number. 900414. The original vehicle number tag is still in place on the firewall, though it has been concealed with a correctly stamped replacement tag, and the stickers from the Packard Proving Grounds, dated 23 June 1932, are still on the outside of the glove box.

Following completion of the restoration, the Packard has been shown only selectively but to tremendous success, most notably in Classic Car Club of America’s rigorous competition. It has appeared in CCCA judging three times, each time being scored at a perfect 100 points and achieving Premier honors. Most recently it was exhibited at the 2019 Pebble Beach Concours d’Elegance. It is offered today in the same show-worthy condition, accompanied by a copy of its written history as recounted by Jim Callahan, and a particularly fascinating binder of photographs taken before and during restoration.

One of a believed three surviving 905 Twin Six Convertible Victorias, this is almost certainly among the finest 1932 Twin Sixes, period—a car of fascinating history and known provenance in exceptional concours condition. 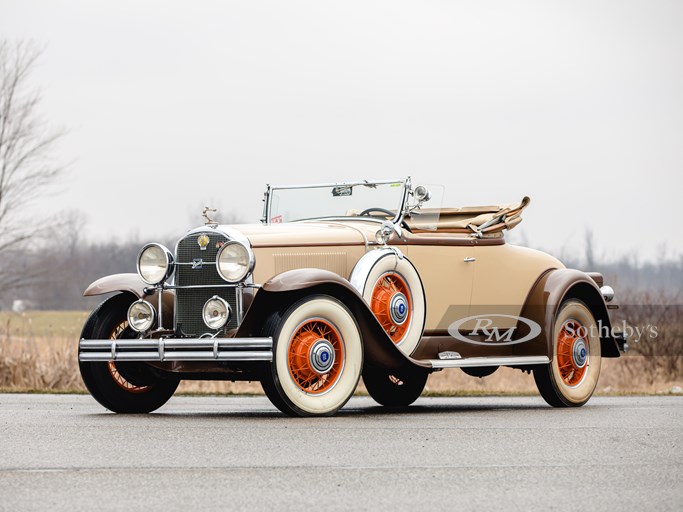