The Ferrari F50 was intended as an early celebration of the marque’s 50th anniversary. What bowed under the bright lights of the 1996 Geneva Motor Show was the culmination of everything the automaker had learned over its five decades of existence. The F50’s 512-horsepower V-12 stretched the limits of natural aspiration as it screamed toward its 8,000-rpm redline, while the car’s carbon-fiber tub kept the weight in check. The F50 split the difference between raw Ferraris of the past and the high-tech future.

To create the production F50, Ferrari and Pininfarina turned to wind tunnels. The shape of the 1989 Ferrari Mythos Concept remained a basis of the styling, albeit with a curvier design with projector lights housed under headlight covers, deep air intakes in the front hood, a small passenger compartment, and a massive rear wing that likened it to the F40 that preceded it. Enormous, center-locking, 18-inch magnesium alloy wheels from Speedline took the Campagnolo look from the 1980s into a new decade.

The shapely body was created from carbon fiber and was wrapped over a tub created from the same material. Solid mounts held the race-derived 4.7-liter V-12 engine into the car. In fact, the V-12 itself was closely related to a previous Formula 1 engine blueprint which was utilized with great success by Scuderia Ferrari up until the 1991 season. A six-speed manual transmission shuttled power rearward to a limited-slip differential. Cooling came via an oil-water intercooler sandwiched between the transmission’s lubrication system and the engine.

Underneath, the F50 utilized rose-jointed unequal-length wishbones front and rear. Bilstein was tasked with creating electronically adaptive dampers to make what was essentially a Formula 1 car with windshield wipers and a passenger seat. Unassisted power steering ensured that the F50 would live up to its predecessors. After all, the F50 was never designed to scrub mileage as it dashed across the continent. Gigantic Brembo brakes guaranteed that the F50 would come to a halt quickly after reaching its 202-mph top speed. A carbon-fiber-reinforced polymer intake supplied air, while fuel was held in an aircraft-grade Sekur fuel-tank bag to keep weight to an absolute minimum. Unladen, the car tipped the scales at just over 3,000 pounds, a remarkable feat given the power underhood, its relatively long 101.6-inch wheelbase, and the fact that the car’s structure was stiffened considerably because Ferrari chose to include a removable targa roof over the passenger compartment.

Put to the test, the F50 was four seconds faster around the course at Fiorano than the F40 that preceded it. Even Ferrari’s then-president, Luca di Montezemolo, gushed with praise. He told Motor Trend in a 1995 review that the F50 would be “the first and last Formula 1 car with two seats.”

The F50 hit the American market with an unusual lease program designed to prevent speculators profiting shortly after the model’s release. Of the 349 examples reportedly built, just 55 F50s were earmarked for the American market, including the car offered here: Chassis 104262.

Completed on 23 February 1996, this F50 was delivered new shortly thereafter to noted Ferrari collector Stanley Cohen of Windsor, Connecticut via Miller Motorcars in nearby Greenwich, Connecticut. As a prominent marque VIP with a penchant for securing classic and brand-new models of desirable pedigree, Cohen was surely among the very small clan of American Ferrari collectors whose F50 chassis allocation was guaranteed.

Upon receipt, the car was registered under the plates “DC 77.” Through his following 22 years of fastidious ownership, Cohen had this F50 maintained by the same technician, Thomas Passalacqua, who completed its pre-delivery inspection back in May 1996. Passalacqua was previously employed by Miller Motorcars until later starting his own performance facility, P1 Motorcars in Stamford, Connecticut.

Accompanying invoices on file illustrate regular, annual maintenance visits in line with the factory-recommended schedule. In January 2013, this F50’s highly original status and factory equipment were successfully certified by Ferrari Classiche. The accompanying documentation on file illustrates that the car still retains all of its major components, including its 4.7-liter V-12 engine, six-speed transaxle, carbon fiber bodywork, chassis, differential, and suspension components.

Notable servicing completed during Cohen’s twilight years of ownership include a “major” engine service in January 2017, and the fitment of a new fuel bladder, tires, and brake lines in August 2017 to the tune of nearly $51,000 USD. Cohen regularly enjoyed but rarely, if ever, exhibited his F50; the only recorded showing of the car came in June 2004 at the fourth Annual Hartford Concours d’Elegance. Cohen sold the car in January 2018 to the consignor, then showing just under 8,375 miles since new.

The car was then treated to a complete concours preparation regimen in early 2019. At some point after Cohen submitted the car to Classiche, he removed the original exhaust in favor an aftermarket setup from Tubi. The consignor ordered the original exhaust refitted to the car in December 2019. The following January, the consignor entered 104262 for judging at Cavallino XXIX in Palm Beach, Florida. To the surprise of absolutely none in attendance, this eminent F50 was crowned the “Best F50” of the event, scoring over 98 points when judged—thereby securing a revered “Platinum Award” as well. The car received another major service from Passalacqua at P1 Motor Cars at the end of January 2020, and more recently, had its annual service there in March 2021.

This preeminent F50 is now accompanied by all of its correct factory accoutrements including “circus box,” tools, manuals, literature, serialized Schedoni carbon fiber luggage, window sticker, and factory correspondence addressed to Stanley Cohen. A complete list of each accompanying item can be found in the listing’s file repository.

With an ever-dwindling supply of “investment-grade”, U.S.-spec F50s extant, this particular award-winning example is an alluring offering for the most discerning Ferrari collector. Presented with a high degree of originality, all of its correct, factory accoutrements and benefitting from meticulous maintenance from marque specialists, chassis 10492 is undoubtedly among the finest and most breathtaking examples of the F50 presently available. 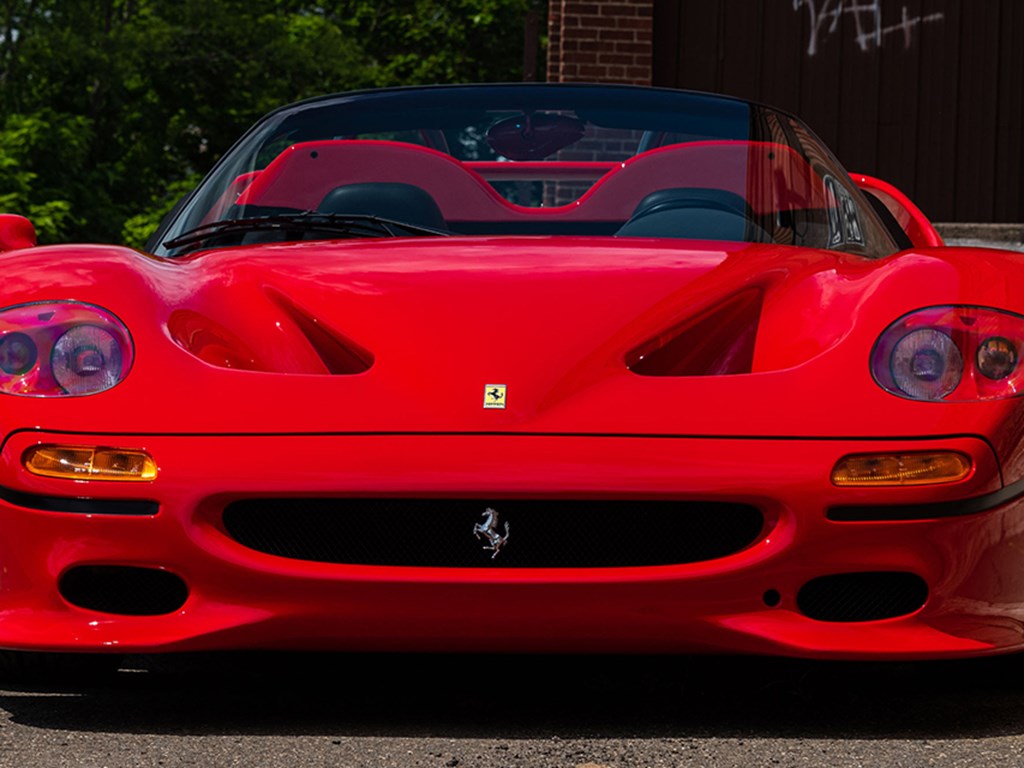 Ferrari Friday: One of the Finest Ferrari F50 Examples Available Offered at Monterey 2021

Ferrari Friday: One of the Finest Ferrari F50 Examples Available Offered at Monterey 2021