Engine number 50012, pictured in its original chassis, is fitted with a set of new Bowes Seal Fast spark plugs before the 1937 Indianapolis 500.

Tazio Nuvolari’s epic drive in the 1935 German Grand Prix aside, by mid-year it was evident that Alfa Romeo’s illustrious, but aging, Tipo B model was in need of replacement; particularly so in the face of increasingly potent opposition from Mercedes-Benz and Auto Union. Against this backdrop, Vittorio Jano set about the design of a new car—the Tipo C—which initially featured an enlarged 3.8-liter engine, fitted with a pair of superchargers each feeding a bank of four cylinders, mated to a rear-mounted transaxle, and housed in an all-new, independently-sprung chassis. Dubbed the 8C 35, it debuted at the Italian Grand Prix at Monza in September 1935, with Nuvolari sharing Dreyfus’ car to finish an encouraging 2nd behind Hans Stuck’s Auto Union.

Informed opinion, led by marque historian Simon Moore in his book The Magnificent Monopostos, together with Luigi Fusi’s earlier writings, suggest that approximately a dozen Tipo C chassis were completed. The same basic Tipo C chassis was used both in the 8C 35 and later in V-12-powered 12C 36 as it would accept both Alfa’s eight- and twelve-cylinder engines interchangeably. Four complete 8C 35s were eventually sold off, designated 50011-50014, although it is known that at least three other 8C 35 engines existed (50015-50017). Moore accounted for seven of the 4-liter V-12 engines used in Tipo C chassis to compete in 12C 36 form. Although less successful than the Tipo B, the 8C 35 remained competitive in 1936, achieving victories in Budapest, the Coppa Ciano, and at Donington, while its new twelve-cylinder counterpart emerged victorious at Barcelona, Milan, and Modena.

A lifelong Alfa Romeo enthusiast, having owned some ten pre-war racing examples of the marque, including the Nuvolari/Seaman/Ruesch 8C 35 (chassis number 50013), the late Peter Giddings acquired a bare “hat” section chassis frame, of the type used on the 8C 35, in mid-1996. It bore no discernible Alfa Romeo or Scuderia Ferrari markings; its only distinguishing features being the number “8” stamped either side of the front cross member. The chassis had reputedly been found in Argentina by Alfa Romeo collector Aldo Cesaro. It showed signs of accident damage and looked to have been “rebuilt several times,” requiring straightening before being used again, according to correspondence on file from Auto Restorations NZ. Despite much research and many theories, however, the specific origins of this chassis have proved elusive. Metallurgical testing performed in 2021 indicated differences in metal composition between this and the chrome-moly steel known to have been used in factory Tipo C and 8C 2900 sports racing car chassis, casting a degree of doubt on Peter Giddings’ long-held belief that the number 8 chassis had been taken from Italy to Argentina by Piero Dusio of Cisitalia fame. While the true story of its chassis may never be fully known, the heart of this car is unquestionably its seven-time Indianapolis 500 competing 8C 35 engine.

For some years, Mr. Giddings had been aware of the existence of the original engine of chassis 50012, which had been shipped to the US in the Fall of 1936 by Scuderia Ferrari for use as a spare car in the Vanderbilt Cup. After the event—which witnessed a dominant victory by Nuvolari in one of the Scuderia’s 12C 36 chassis—the car remained in the US, being sold to Bill White in early 1937, for his nominated driver Rex Mays to drive in that year’s Indy 500. Suitably modified to accommodate the then current requirement for a riding mechanic—in Mays’ case Lawson Harris, himself an Indianapolis winner with Louis Meyer in both 1933 and 1936—the car ran strongly early on before retiring with overheating issues after just 24 laps.

After their Indy travails with 50012, Mays and White returned the car to single-seat configuration, entering the 1937 Vanderbilt Cup race as Ferrari had done the previous year. The race would prove to be a triumph for the small Californian operation, with Mays finishing a remarkable 3rd, beaten only by Rosemeyer’s C-type Auto Union and Seaman’s Mercedes-Benz W125, and finishing ahead of von Delius’ Auto Union and both Scuderia Ferrari entries of Nuvolari and Farina. Indeed, so accomplished was the performance that Mercedes Team Manager Alfred Neubauer was moved to offer White a test for his star driver in Europe; something which, inexplicably, White subsequently failed to communicate to Mays!

Following the Vanderbilt Cup race, the engine of 50012 was extensively re-worked to comply with the new-for-1938 Indianapolis and Grand Prix regulations, which stipulated a maximum capacity of 3 liters. Legendary engineer Fred Offenhauser oversaw the production of a new short-stroke crankshaft which reduced the “throw” from 100-mm to just 82-mm and cast new cylinder blocks with a noticeably smaller bore of 75.5 mm, in place of the original 78-mm units. The resulting engine now displaced just 2,937 cc, almost 900 cc less than its original specification.

In 1938, Mays returned to Indianapolis with the revised 50012 and, despite having qualified the car 3rd, retired once again; this time after 45 laps with supercharger trouble. The following year, White entrusted driving duties to Texan Babe Stapp who, in his eleventh appearance at the Brickyard, would finish the race in a creditable 5th position. The venerable car competed at Indianapolis on a further four occasions, in 1940, 1941, 1946 and 1947, all with White still its entrant. The car’s most notable finishes being 7th place in 1941 and 1947, courtesy of Harry McQuinn and Cy Marshall, respectively.

In his book, Simon Moore quotes Rex Mays’ biographer, Bob Schilling, as having viewed the much-used car—still in White’s possession, but less engine—at the latter’s premises in Los Angeles in late 1955 or 1956. A further decade or so later, the chassis ended up in the possession of fellow Californian Michael Agabra who sold it back to Alfa Romeo for restoration under the late Luigi Fusi’s expert eye, albeit with a 12C 36 engine in place of its original eight-cylinder unit. It is in this form which chassis 50012 survives today, on permanent display in the factory museum.

The remains of 50012’s original engine—also stamped “64,” a result of its Scuderia Ferrari heritage—were subsequently located and purchased by Milwaukee-based enthusiast David Uihlein for possible fitment into his then engineless ex-Frank Griswold, ex-Tommy Lee Tipo B, chassis 50007. However, in view of the installation issues presented by the somewhat longer Tipo C engine relative to that of a Tipo B unit (and having sourced a suitable Tipo B engine in the interim), Uihlein instead opted to sell engine number 50012 to Peter Giddings in early 1996.

It was at this point, in 1996, that Giddings shipped his Cesaro-sourced chassis, newly acquired engine 50012, brakes, and suspension components, along with two 12C 37 transaxles (acquired independently from noted British and Australian Alfa authorities Paul Grist and John Lawson) to renowned restorers Auto Restorations of Christchurch, New Zealand. Over the course of the next five years, Auto Restorations carried out an exacting restoration of these disparate but crucially period correct parts and presided over their subsequent assembly, using Peter’s “other” 8C 35, 50013, for invaluable reference and pattern purposes.

Once straightened, the hitherto damaged chassis was then suitably modified to accept the 12C 37 transaxle, in which the gearbox operated behind the rear axle line—as opposed to in front, as with an 8C 35. Certain components were fortuitously acquired, such as a pair of Tipo C rear brake assemblies and drums, although inevitably rather more required manufacturing entirely from scratch, often utilising original factory drawings. Examples of the latter included recreating the intricate correct-type Weber carburettors, superchargers, lubrication system, and radiator—not to mention recreating the entire aluminium body. In deference to the engine’s illustrious Indianapolis 500 history, it was decided that the Offenhauser-inspired 3-liter configuration be retained and, while one of the two original cylinder blocks was found to be cracked, the other was found to be serviceable and was used alongside a newly manufactured replacement.

Duly completed, the car ran for the first time—appropriately on New Zealand soil—at Ruapuna, in February 2002, acquitting itself wonderfully to win the Vintage class. Thereafter, chassis 8 was shipped back to its adopted Californian home, becoming a regular fixture on the US vintage racing scene. In fact, for the next 16 years in Peter’s extremely capable hands, it raced in upwards of 50-plus vintage race weekends, finishing on the podium on nearly every occasion.

The very epitome of a mid-1930s Grand Prix car, the Peter Giddings 8C 35 is a fitting tribute not only to those who designed, constructed and drove these magnificent cars originally, but also to the remarkable enthusiasm, prescience, and sheer tenacity of its late owner. Impeccably presented and painstakingly restored, it is one of just four Tipo Cs currently in running order and offers a fascinating insight into the 8C’s illustrious competition history on both sides of the Atlantic. Furthermore, considering the impracticality and unavailability of contemporary Mercedes-Benz and Auto Union chassis, it represents an incredibly rare opportunity to acquire an example of the one of the “Grand Marques” of the period and would be ideally suited to and eligible for any number of vintage racing events its fortunate new owner may wish to compete in. 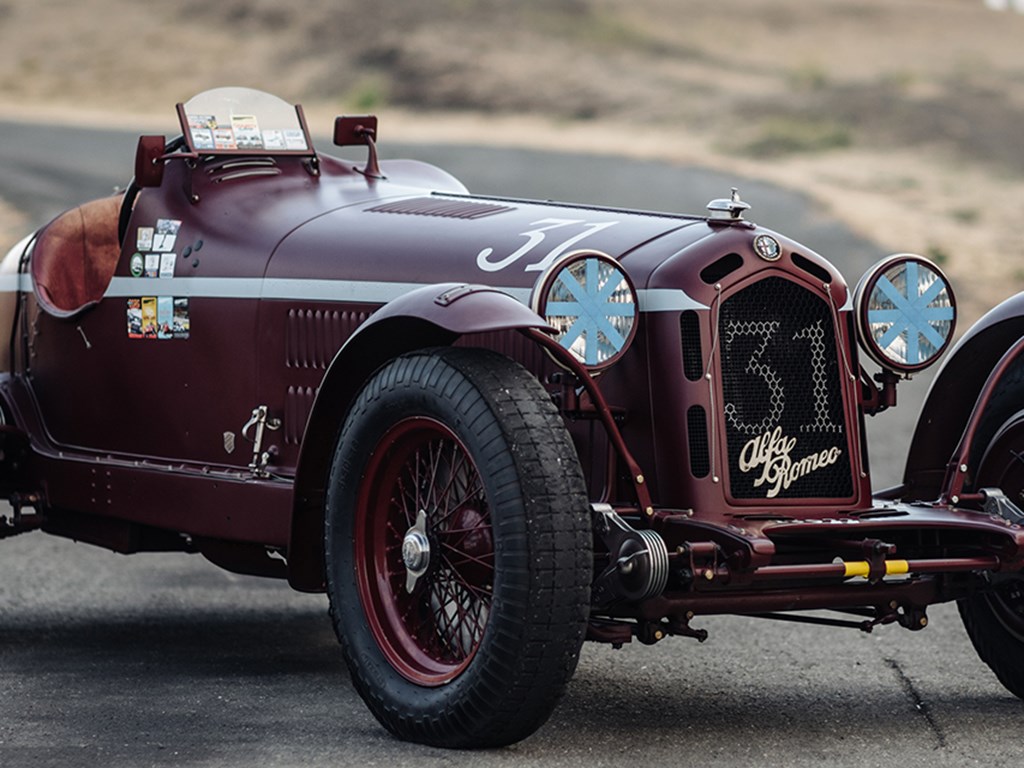 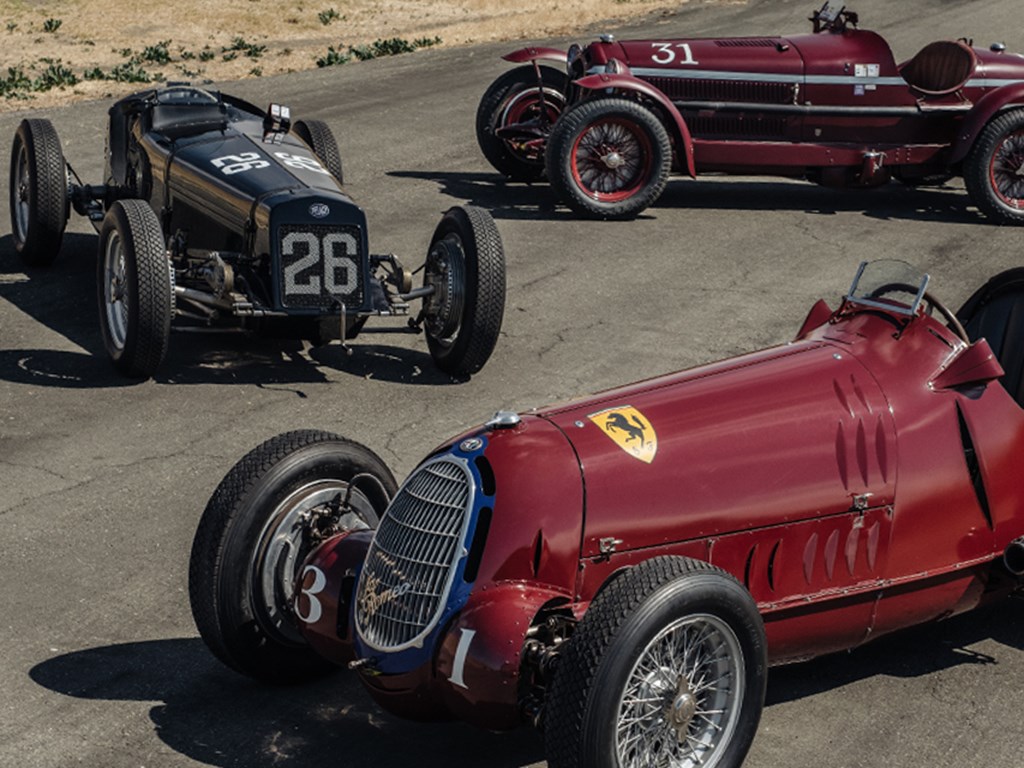 Treasures from the world of pre-war racing, all featuring added provenance from a true enthusiast collector.