View Lots
Chassis No.
101195
Please note that this lot will need to be collected from Auburn, IN - Indiana

The Daimler SP250 was a totally new venture for one of Britain’s most established auto manufacturing firms. Daimler was in dire straits by 1959 and owner BSA (motorcycles) thought a sports car tailored to American tastes would help turn the company fortunes around. The Dart, as it was first known, debuted at the New York Auto Show; the name later changed to SP250 due to complaints from Chrysler. The new moniker reflected the size of 140 bhp 2.5-liter hemi-head V-8 engine designed by Edward Turner, a recent arrival at Daimler from Triumph. Along with a standard four-speed gearbox, the 2,200-pound car was cable of 0-60 mph in 10.2 seconds and a top speed of 120 mph.

Its chassis and suspension mimicked the Triumph TR3 of the same vintage; however, the simple design was thought to be lightly braced and too flexible for the powerful motor. Jaguar purchased Daimler in mid-1960, simultaneously providing the SP250 with a stiffer body and suspension changes to improve handling. SP250’s were raced for several seasons in both Great Britain and the U.S. Just 2,468 of the fiberglass-bodied roadsters were produced from 1959-1964.

Finished in a Silver Blue Metallic with a tan Everflex convertible top and matching interior, this “catfish,” as the SP250’s were known, is fitted with blackwall tires on 48-spoke knock-off wheels. Chrome is described as excellent and inside you find both a heater and the original Smiths gauges. The engine bay is tidy and well-cared for and the 2.5-litre V-8 and four-speed manual transmission will make for spirited driving. Looking for a fun-to-drive, yet uncommon sports car for the next outing, this is the perfect one! 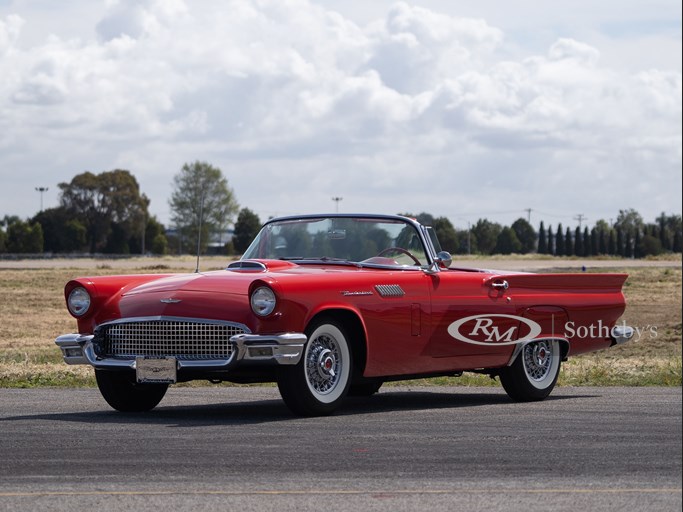