"The Most Famous Car in the World"

Catalogue WATCH VIDEO
Chassis No.
DB5/2008/R
Engine No.
400/1995
Addendum: Please note that an import duty of 2.5% of the purchase price is payable on this lot if the buyer is a resident of the United States.
‡ NO INTERNET BIDDING AND ADVANCE REGISTRATION REQUIRED

Δ MINIMUM PRICE GUARANTEED FOR CONSIGNOR: The Consignor of lots with this symbol has been guaranteed a minimum price for this lot. The guarantee may be provided by RM Sotheby’s (“RMS”) or jointly by RMS and a third party. RMS and any third parties providing the guarantee with RMS may benefit financially if a guaranteed lot is sold successfully and may incur a loss if the sale is not successful. In some cases, a party may provide RMS with an irrevocable bid on a guaranteed lot that will be executed during the sale. In such cases, the irrevocable bidder will be compensated based on the final hammer price in the event that he or she is not the successful bidder.

No one could have predicted back in 1965 the fabulously successful multi-decade synergy that would develop when two men from the movie business visited Aston Martin’s Newport-Pagnell plant in late 1963. Ken Adam and John Stears, respectively a production designer and a special effects man, were on a mission from producers Albert “Cubby” Broccoli and Harry Saltzman. They were to source a pair of the latest Aston Martins for use in Eon Productions’ third adaptation of an Ian Fleming novel, again about the virile MI6 superspy with a license to kill, James Bond. It was called Goldfinger.

In typical moviemaking fashion, the producers wanted two near-identical cars to fulfill various roles during filming. One would be required for stunt driving and chase sequences and therefore needed to be lightweight and fast. The other, to be used for interior shots and close-ups, was to undergo several functional modifications created by Stears, the kind that would furnish James Bond with an unprecedented amount of gadgetry.

Despite the filmmakers’ expectation that Aston Martin would happily give them two cars for promotional benefits, marque president David Brown insisted that the production company buy the cars outright. Eventually a compromise was reached in which two cars were loaned to Eon Productions for the duration of filming, after which they would be returned to Aston Martin.

Though John Stears’ revolutionary Oscar-winning work on the original Star Wars movie of 1977 was yet more than a decade away, his ingenuity was already evident in the modifications that he made for the special-effects Aston Martin. The first James Bond car was also the DB5 prototype and bore a special chassis number prefix denoting it as a development project, DP/216/1. As Desmond Llewelyn’s legendary weapons-master Q would go on to explain to Sean Connery’s 007, the Snow Shadow Gray–painted DB5 was equipped with front and rear hydraulic over-rider rams on the bumpers, a Browning .30-caliber machine gun in each fender, wheel-hub-mounted tire slashers, a retractable rear bulletproof screen, an in-dash radar-tracking scope, oil-slick, caltrop, and smoke-screen dispensers, revolving license plates, and a passenger-seat ejection system. Also equipped, although never used during the film, was a telephone in the driver’s door to communicate with MI6 headquarters, as well as a hidden compartment under the driver’s seat containing several weapons.

The smash success of Goldfinger was also a success for Aston Martin, which received free promotion around the world and saw DB5 sales surge to fuel an unprecedented level of production. The producers at Eon took notice of the enormous appeal and potential marketing opportunities. In preparation for Thunderball’s release, the company ordered two more DB5 saloons, receiving chassis nos. DB5/2008/R (the featured example) and DB5/2017/R. The two cars were shipped to the United States for media duties for Thunderball. One was dispatched to the East Coast, and the other to the West. The latter DB5 even appeared at Laguna Seca as a pace car driven by Jackie Stewart.

Both cars were fitted with all of Adam’s Goldfinger modifications, but this time the gadgets were installed by Aston Martin and intended to be more durable than those on DP/216, whose gadgetry was comparatively very primitive, as they were never designed to function for more than one take, thanks to careful editing! This car’s gadgets, on the other hand, were designed and built to function repeatedly on command, as they do today.

After completion of Thunderball, the two cars were largely mothballed as yet two more Bond films followed with different automobiles in the hero roles. Accordingly, the production company’s parent financier, the Swiss-based Danjac S.A., quietly offered the two cars for sale in 1969, and they were soon bought as a pair by the well-known British collector Anthony (now Lord) Bamford. He quickly sold 2017/R but retained possession of 2008/R until 1970, and the British registration for the car in his name remains on file. The Aston Martin build record lists Eon Productions as the original purchaser along with the important designation of this being a “Bond Car.” Under Bamford’s ownership the saloon returned to the factory for service, and it received a host of freshening and mechanical measures, all of which are documented on the build record.

Bamford then sold DB5/2008/R to B.H. Atchley, the owner of the Smokey Mountain Car Museum in Pigeon Forge, Tennessee. The unique Aston Martin was soon featured as the museum’s centerpiece in a rather unusual display, as the car was encased in a large wire-mesh cage that was bolted to the floor, ensuring it would never be idly touched or pawed by starstruck visitors. The DB5 remained in this pristine state of display for 35 years, receiving regular start-ups for exercise during this time.

In 2006, RM Auctions was privileged to offer this Bond DB5 for public sale. While some of the Bond contraptions were restored into functioning order prior to the 2006 offering, a majority of the car remained otherwise unrestored. Since that time a no-expense-spared restoration by the esteemed Roos Engineering in Switzerland was completed, as documented by numerous invoices and photographs. Roos Engineering is also one of 13 facilities whom Aston Martin have appointed as official Heritage Specialists, who have the highest order of depth, expertise, and experience with the marque. Not only were the chassis and body completely refinished to proper standards, but all 13 of the Ken Adam–designed modifications were properly refurbished to function as originally built. Following completion of the four-year restoration, the Aston Martin was the subject of a feature article on the Bond DB5 cars that was printed in the October 2012 issue of Motor.

Being the third of just four Goldfinger-specification DB5 examples built, this Aston Martin is automatically endowed with a high degree of rarity. It should be noted that the first John Stears–modified car has been lost since 1997, narrowing the number of surviving examples to just three cars. Of these survivors, one car (chassis no. 1486/R) was originally unmodified, as it was used for driving sequences and only had gadgets added later. Most important, this car was built with all gadgetry from new, elevating its status and importance. In addition to this distinction, DB5/2008/R has benefited from an extremely minimal chain of ownership: just three private owners over 50 years, including a 35-year period of museum exhibition.

Reached though his son, Stephane Connery, ahead of the sale, Sean Connery said, “These DB5s are amazing. I remember the Furka Pass tire shredding, as well as the promotional events with these cars—they have become increasingly iconic since Goldfinger and Thunderball. In fact, I bought a very fine DB5 myself relatively recently.”

Built for Eon Productions, fitted with gadgetry from new, documented with the “Bond Car” designation on the Aston Martin build record, and accompanied by Anthony Bamford’s 1969 registration and restoration invoices and photos, this James Bond Aston Martin is a fabulously rare example of what author Dave Worrall termed “The Most Famous Car in the World,” as he titled his 1993 book on the subject.

Noted historian Stephen Archer, who rode in one of the cars in 1965, commented: “The DB5 is a special Aston, but this one has an aura all of its own. Just to be in its presence is exciting. The standard of Roos’ restoration is extremely impressive, and the Swiss Furka Pass awaits…”

Quite simply the most iconic car of all time, DB5/2008/R is the most legendary Aston Martin ever built, as one of the cornerstones of a marketing relationship that exists to this day. It would crown any important collection and offers a highly desirable acquisition for the serious marque collector…or secret agent. 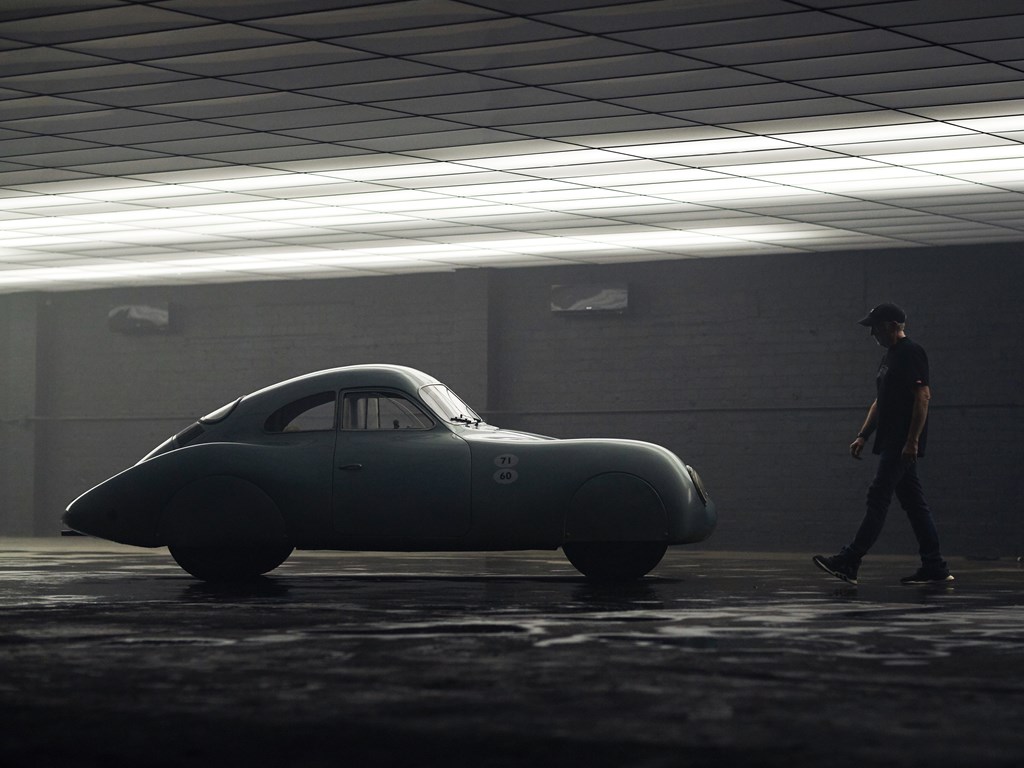 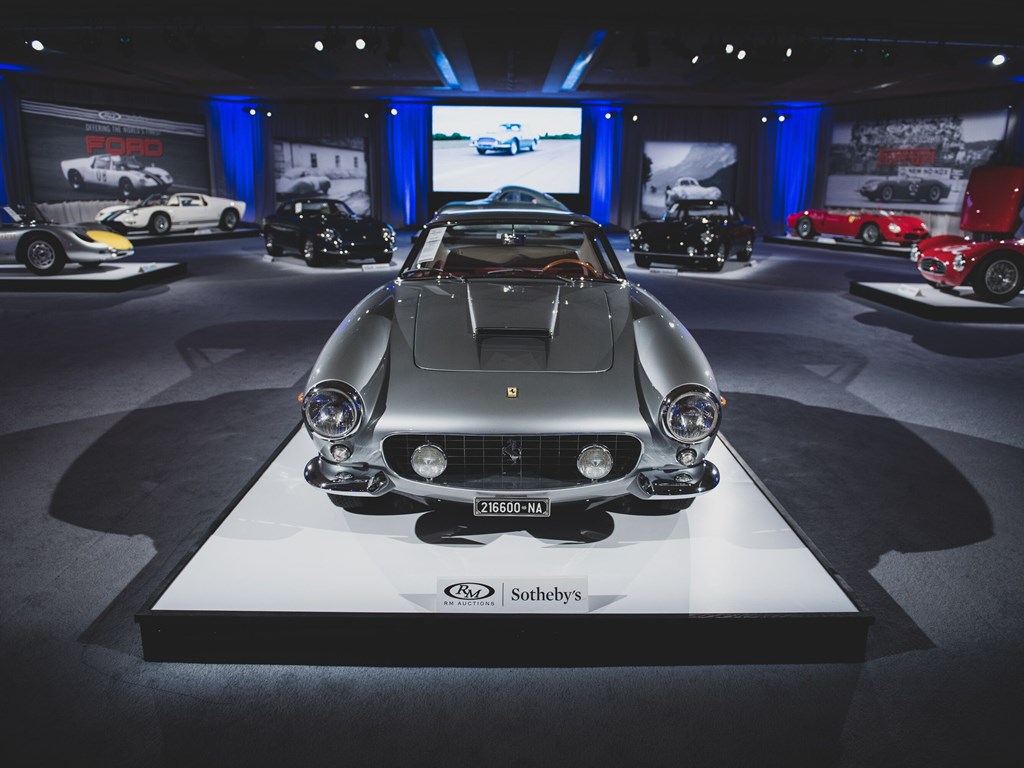 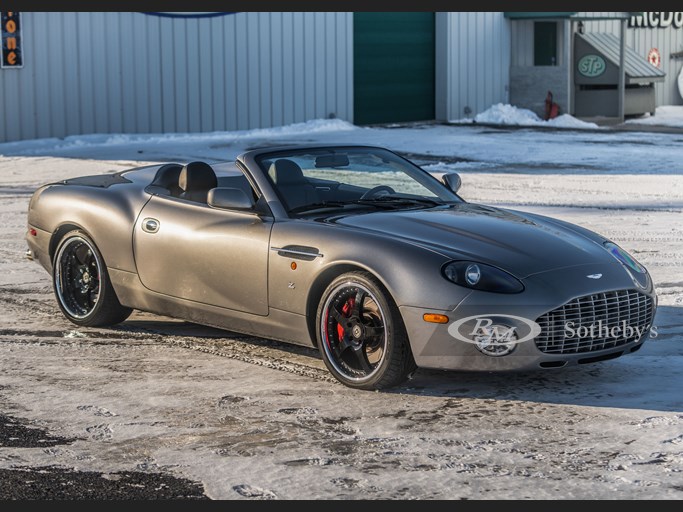