Catalogue View Lots
Chassis No.
Engine No.
1055 GT
1055 GT
Please note that this vehicle is offered on a Bill of Sale. Please note that Internet bidding is not available for this lot. Interested parties that are unable to attend the sale may register to bid by telephone or place a commission bid online at rmsothebys.com. Furthermore, bidding on this lot requires a special registration process to be completed no later than 48 hours in advance of the sale. Please contact Client Services at +1 519 352 4575 or clientservices@rmsothebys.com to register your interest.

If there are two words in the Ferrari vocabulary that get the blood flowing in any tifosi, surely they are “California Spider.” Considered by many to be the most beautiful car to come out of Maranello, the California Spider had the performance credentials to back up its stunning presence. To the individual that was looking for a car that could be driven leisurely with the top down on Saturday, taken to the track and raced hard on Sunday, and with the requisite Italian style and flair only a Ferrari could deliver, there was simply no other option.

The story of the California Spider starts with Ferrari’s two United States distributors, Luigi Chinetti and John von Neumann. Both men recognized that the American market was desirous for a convertible version of Ferrari’s mighty 250 GT Berlinetta, which gained the nickname “Tour de France” (or TdF) for its wins at the iconic French sports car race. Ferrari’s American clients wanted all the performance that the TdF could provide but also a convertible roof, which was perfect for those sunny California days, and they lobbied the factory for the production of such an automobile. While Ferrari already produced a convertible V-12 road car at the time, the 250 GT Cabriolet, this car was not to be confused with the California Spider, as the Cabriolet drew its roots from the Pinin Farina Coupe. The California Spider was something far more potent.

Make no mistake, the long-wheelbase Spider was not solely intended for Ferrari’s wealthiest clients to use for jaunts down the California coastline; it was a car that came with a serious competition pedigree and was perfect for that enthusiast in search of a fast and purposeful open two-seater. American driver Richie Ginther co-drove with Howard Hively in a LWB California Spider to win the GT Class at the 1959 12 Hours of Sebring, finishing 9th place overall. However, the most remarkable competition success was undoubtedly Chinetti’s North American Racing Team’s 5th overall at the 1959 24 Hours of Le Mans. The NART-entered Ferrari California Spider of Bob Grossman and Fernand Tavano was beaten only by two Aston Martin sports racing cars and two Ferrari competition coupes, and it covered 3,964.491 kilometers at an average speed of 165.187 km/h, including pit stops. This was no boulevard cruiser and not a Ferrari to be taken lightly.

California Spider production began in 1958, and several examples had been built by the time it was announced as a separate model at Ferrari’s annual press conference in Modena on 9 December 1958. Many of the early California Spiders carried only subtle changes over their hardtop siblings. The prototype, chassis 0769 GT, was nearly unchanged from the TdF, with the exception of its convertible top. By mid-1958, the car had adopted an engine with reinforced connecting rods and crankshaft (type 128D) and a new chassis (type 508D), but it still retained the 250’s original wheelbase of 2,600 millimeters. Cosmetic changes were minor, with slightly revised wheel arches, and it could be specified with either open or closed headlights. All told, 14 LWB California Spiders were built during 1958, with the remaining 36 cars being built between 1959 and 1960.

Chassis 1055 GT, the LWB California Spider presented here, was the 11th example built, and it was finished in classic Ferrari Rosso Rubino, with a black leather interior, and was fitted with covered headlamps from new, according to its factory build sheet.

This California Spider was completed in November 1958, and then it boarded a ship bound for New York City. In January 1959, it was delivered new to Luigi Chinetti Motors, and then it was soon in transit again. It was sent to Fawcett Motors in Lubbock, Texas, before it was sold to its first owner, M. Steven Deck, a local attorney who registered it in the name of Deck Produce Company. Deck kept his California Spider for two years, then selling it to another Texan.

On 7 January 1962, this California Spider raced at the Osceola Grand Prix, an SCCA regional event in Geneva, Florida. Chassis 1055 GT, wearing #19 and being piloted by Ross Durant, placed 1st in class (2nd OA, against a Lister Corvette) in its only documented competitive outing, demonstrating the race-bred nature of the California Spider itself. (The car is pictured at this event in Prancing Horse magazine, issue number 168.)

Chassis 1055 GT would remain in the southern United States for many years, including the period before and after its acquisition by Robert McKee and Gerald L. Roush, founder and publisher of the Ferrari Market Letter, in 1972. Two years later the car was purchased by Ewing Hunter, of Atlanta, Georgia, who was one of three owners of FAF Motorcars, the official Ferrari dealership in Tucker, Georgia. At that time, it was restored by FAF Motorcars, again being painted red with a black leather interior. This California Spider then made its way north, and by 1983, it came into the ownership of Ferrari historian Stan Nowak, who authored (among several other books on Ferrari) the monograph Ferrari Spyder California, which was no doubt inspired in part by his time with 1055 GT. The car was then sold to noted Ferrari collector Anthony Wang in 1985.

In late-1992, chassis 1055 GT was purchased by James George, of Mount Clemens, Michigan. George decided that his new California Spider would remain with Sheehan’s European Auto Restoration for a full concours-level restoration. During this process, a comprehensive album that contains literally hundreds of detailed restoration photos was generated, and these photos convincingly suggest that there was no evidence of rust or accident trauma. The restoration was finally completed in January 1994, at a then-stratospheric cost of $150,000. Less than a month later, the car was shown at the Cavallino Classic, where it placed First in Class, testifying to the quality and authenticity of its restoration. Several months later, George brought his California Spider to its namesake state of California, where it participated in the 30th annual Ferrari Club of America International Concours, the Concourso Italiano at The Quail Lodge, and the 44th annual Pebble Beach Concours d’Elegance.

After leaving George’s ownership the following year, 1055 GT passed through another noted East Coast Ferrari collector, and then, in 1998, it was shipped overseas to Jorn-Holger Richter, a resident in Gstadt, Germany. In May, under this new ownership, the still original engine was completely rebuilt in the Netherlands by marque specialist Piet Roelofs. The Ferrari would remain with Richter for 13 years, until it was acquired by one of the foremost Ferrari collectors in the Northeast United States, who treated the car to a fresh service at Ferrari of Newport Beach. It was acquired by its current owner in 2014.

The car was then sent back to California, where it was refinished in a period-correct dark blue and its interior was re-trimmed in contrasting lighter blue leather with grey carpeting by Brian Hoyt of Perfect Reflections in Hayward, California. Its first show outing following its refinishing was at the FCA National meet in 2014 in Leesburg, Virginia, where it was awarded the Luigi Chinetti Memorial Award. After appearing at the FCA National Meet in 2014, the engine was fully rebuilt by renowned Ferrari mechanic Patrick Ottis. No expense was spared in bringing the engine to flawless running order, and the car was further dialed in for road use with work done to the brakes and shocks as well. Undoubtedly more distinctive than classic Rosso Corsa, the car attracted lots of attention at this year’s Cavallino Classic, where it won the Emeritus Cup as awarded by Chief Judge Emeritus, Ed Gilbertson. Furthermore, the car is accompanied by a complete tool kit.

Today, the overall quality of the car’s recent refreshening is immediately apparent once one lays eyes on it, and it is easy to see why it won over Ed Gilbertson, as well as the crowds, at the Cavallino Classic this past January. Once one slips into the driver’s seat of this California Spider, they will notice that even though it was clearly designed as a performance automobile, it is also a very comfortable place to be. It would make a memorable participant for top-shelf touring events, such as the Colorado Grand, and it would surely be welcome at concours events around the globe. In addition to copies of the factory build sheet, receipts, and the aforementioned photo album that chronicles its prior restoration by European Auto Restoration, receipts from its prior engine rebuild in the Netherlands and various correspondence between previous owners are all included with the sale. In its current ownership, the car has been awarded Ferrari Classiche certification, confirming that it retains all of its correct and original mechanical components.

As a long-wheelbase example, the trim lines of its topless coachwork are as elegant as they are timeless. The overall effect is long, low, sleek, and decidedly sporting. The California Spider is as close as Ferrari came to building a touring class sports car since the early Barchettas, and only it and the later 275 GTB/4 NART Spiders have the elemental high-speed, open-air attitude that sets these cars apart from their more common cabriolet counterparts. Chassis 1055 GT is a spectacular example, with a notable absence of apparent or known damage in its well-documented past. As such, this offering represents a rare opportunity for anyone with a passion for the very finest Ferraris, and it would likely be the centerpiece of any collection of road-going Ferraris or sports/GTs. Fitting the updated Tour de France’s superlative chassis with the gorgeous and distinctive spider coachwork was a master stroke of brilliance.

The result is a perfect symphony of sound and beauty, blending the most achingly handsome automotive form with the most glorious, soul-stirring automotive aria of them all. 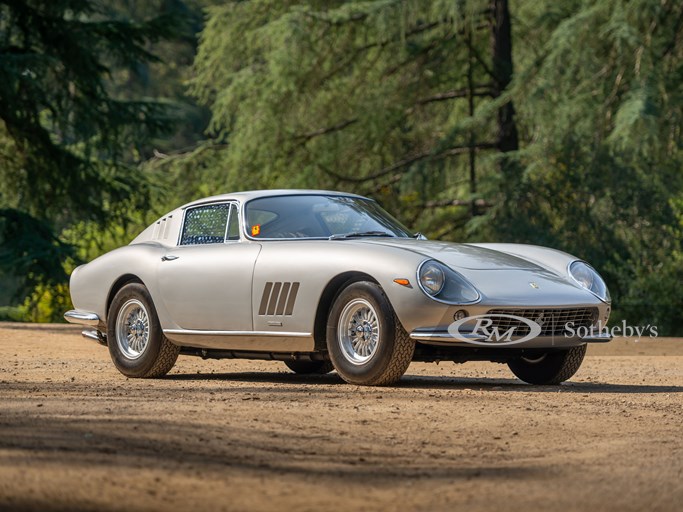 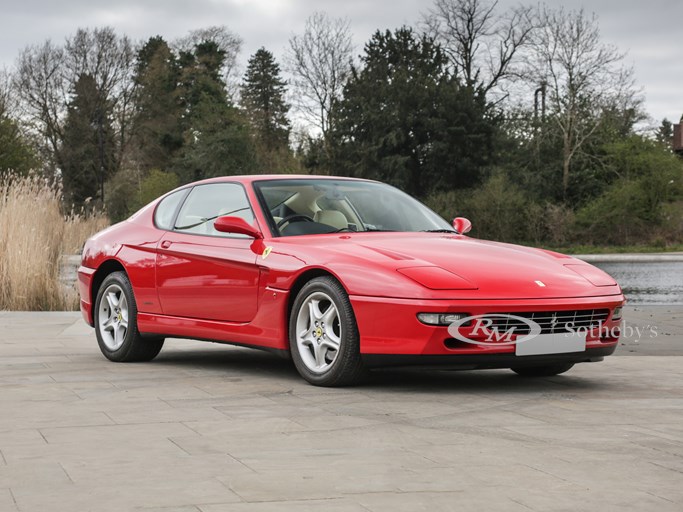