Addendum: Please note that due to California emissions, this vehicle must be purchased by a dealer or out-of-state resident. Also note that this title is in transit.

A LE MANS RACER FOR THE STREET

Looking to return to the 24 Hours of Le Mans, Porsche sought to develop a replacement for its class-winning 911 GT1 in hopes of more success at the Circuit de la Sarthe. Unfortunately, partway through development, a change in FIA rules forced the racer to be shelved. Porsche, however, did not let its newest creation go to waste and eventually decided to develop the platform for road use thanks to additional revenue from the Cayenne, creating the Carrera GT.

Utilizing a carbon-monocoque and fitted with a naturally aspirated V-10, carbon–ceramic brakes at all four corners, and even a cutting-edge carbon–fiber racing clutch, the Carrera GT was laden with a mesmerizing assortment of lightweight racing-derived components. Originally developed by Porsche for the Footwork Formula One team, the mid-mounted engine is paired with a stainless-steel exhaust system to produce a sound similar to that of an F1 car on the Nürburgring.

This would be the first V-10 engine used in a Porsche, and it proved to be the defining feature of the automobile, providing the car with not only a breathtaking soundtrack, but also incredible performance. Although Porsche’s initial press release reported the Carrera GT to move from 0–60 mph in just under four seconds, Car & Driver found it to be an astonishing 3.5, with a quarter-mile sprint in an equally impressive 11.2 seconds. Compare this to the identical quarter-mile time of 11.2 seconds from the Enzo, Ferrari’s flagship supercar of the same era. However, the Enzo had an MSRP just shy of $660,000, while the GT was originally sold for considerably less—$448,000—giving it a greater bang for your buck than its Italian counterpart.

The iconic GT Silver example offered here is a U.S.-delivery car, originally sold in sunny Hawaii, surely one of the best possible locales to enjoy a Carrera GT. It was optioned with manual air conditioning and a sound system with Porsche/Becker CD/radio. By 2006 it had found its way to Japan, where it has remained for the last decade. Recently it underwent a proper service, with a positive clutch reading of 29.65-millimeters, as it should, having recorded only 3,550 original miles; receipts for this service are on file. It also comes with a collection of original manuals and brochures, including the owner’s manual and the original service booklet, as well as the center-lock tool and lumbar support pieces for the seats.

The Carrera GT remains one of the greatest modern Porsches, and it is arguably the finest road-going Porsche most true to the company’s performance heritage. This is a very special example. 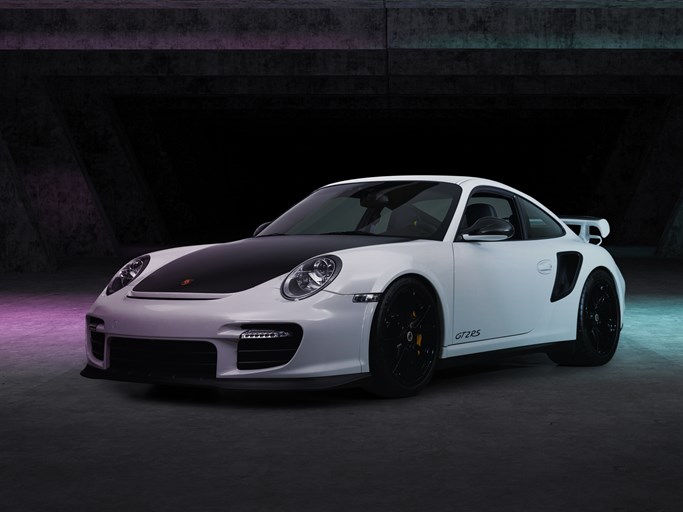