In 1952, Midwestern foreign car importer S.H. “Wacky” Arnolt went to the Turin Motor Show in Italy and met Nuccio Bertone. There he saw a sample coupe and cabriolet, built on MG TD chassis and resembling miniature Ferraris. Sensing a winner, Arnolt struck a deal for MG chassis to be shipped directly to Turin, fitted with coachwork, and then shipped stateside. At $3,195, Arnolt was able to sell every one that Bertone could produce, a total of 100 “Arnolt-MGs.”

Inspired by his success, in 1953, he approached the Bristol Aeroplane Works, which, along with fighter planes, was building limited-production, high-performance 2-litre coupes and dropheads. The Bristol engine was based on the tried-and-true pre-war BMW 328 design, which was well-known within racing circles, and speed equipment was readily available to upgrade performance.

Arnolt married the Bristol 404’s 96-inch-wheelbase chassis with a body styled, once again, by Bertone, who created uniquely flamboyant lines with high swooping fenders. The transmission and brakes were borrowed from the earlier 403 model, with a tuned version of the 2-litre hemi-head Bristol BS1 Mark II engine producing 130 horsepower; the box-section chassis used a transverse-leaf front suspension and a live rear axle. Weighing only 1,800 pounds, performance was excellent; 0 to 60 mph was quoted at 8.7 seconds, and a top speed of 110 mph was possible. Near-perfect weight distribution and decent road manners made the car perfect for the track, though Arnolt originally intended it to be a street car.

The Arnolt-Bristol nonetheless quickly proved its mettle—Freddie Wacker tied for the E Modified Championship in 1954 in an Arnolt-Bristol and in both 1955 and again in 1956. Arnolt-Bristols finished first, second, and fourth in their class at the 12 Hours of Sebring and repeated the win with lightweight aluminum cars in 1960.

Because Arnolt-Bristols were built largely by hand and in limited quantities, just 142 were constructed over a period of seven years, with 130 being sold, as 12 were destroyed in a Chicago warehouse fire.

The car offered here is one of approximately 80 Arnolt-Bristols that remain extant today. According to its restorer, Jack Farland, it began life as one of two cars owned by a husband and wife who fancied themselves club racers. The couple sold his car in the late 1950s to another enthusiast in Illinois, George Adamaek. Mr. Adamaek raced the car until 1966, then stored it in his garage for nearly five decades before selling it to Mr. Farland, who passed it thereafter to the consignor.

Farland Classic Restoration of Englewood, Colorado, then undertook a meticulous nut-and-bolt restoration of the car to its original condition, reportedly taking approximately 6,000 hours. The car was completely disassembled, going so far as to remove the aluminum skins from the framework of the hood and trunk so they could be properly repaired. According to the restorer, parts are very difficult to locate because of the rarity of these cars, yet they managed to locate an amazing collection of parts that had been collected over 30 years. Many of these parts were actually new old stock (NOS), with original labels still attached. This enabled the restoration team to painstakingly piece this car together using the period-correct clips, clamps, and Wentworth nuts and bolts. There was even a perfect-condition original radiator that was able to be utilized from this collection of parts. Even more significant was the loan of an unrestored, near-perfect original car that is two serial numbers removed from this car. The son of “Wacky” Arnolt was kind enough to ship the car to the shop so that they could make sure the integrity of the design was met.

The original engine block was deemed unsalvageable; a brand new recreation block and head were sourced directly from England and stamped with the original engine number. This new engine has slightly more horsepower and torque than the original, which makes the car quite a treat to drive. The rear-end transmission and all braking systems were rebuilt. A new wiring harness was created, and the original gauges and steering wheel were beautifully restored. The unusual leather on the interior of the car is an exact duplicate of the original leather that was found in the car as it was disassembled. The beautiful, medium-shaded red and cream exterior colors were chosen specifically by the original owner of the car.

Debuted at the 2015 Pebble Beach Concours d’Elegance, the car was driven on the 75-mile Tour d’Elegance, reportedly performing flawlessly. It was subsequently named by Bloomberg News as one of the Most Beautiful Cars from Pebble Beach 2015. Shortly thereafter, it was shown at the Santa Fe Concorso, where it received both Best in Class and Most Elegant Open

Ready to be shown, driven, or toured with confidence, this is inarguably one of the nicest Arnolt-Bristols in existence today. 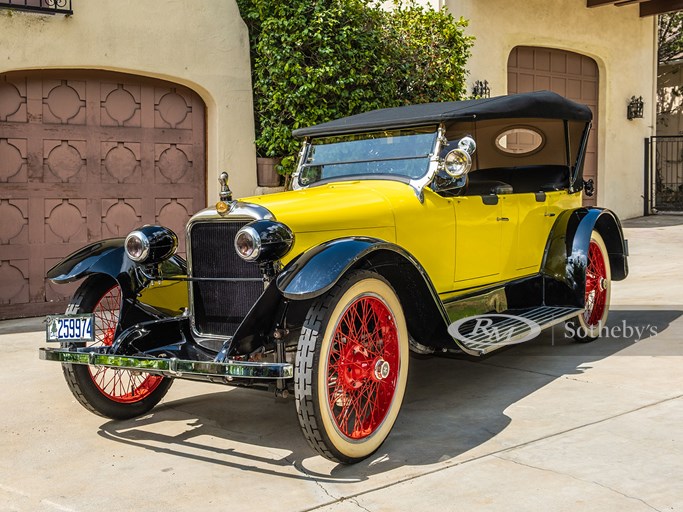