Addendum: Please note that contrary to the print catalogue description, the majority of the restoration work on this car was performed by Wildae Restorations Ltd. of Devon, including restoration of the chassis, ash body frame, body panels, mechanical components, chrome, and paintwork. Alpine Eagle was responsible for the upholstery, interior detailing, and road testing.

One of the most famous “Derby Bentleys,” chassis number B30MR was displayed by Park Ward at the 1938 Earls Court Motor Show in London. A unique design, the sleek two-seater sports coupe was intended to be Bentley’s contemporary to the Mercedes-Benz 540 K Autobahn Kurier, with a smooth fastback tail and aerodynamic close-coupled lines on the most up-to-date “MR” chassis, equipped with fixed radiator shutters, a more sporting dashboard layout, a Marles steering box, and, most prominently, a transmission with an overdrive fourth gear.

Typical of a showpiece, the car was equipped with the latest “trick” features, including a “sunshine roof,” frameless Triplex side windows with mechanical lifts, an illuminated number plate with reverse and brake lights, cigar lighters, and full rear wheel spats. Use of the 4¼-litre chassis for a two-passenger body allowed for quite a bit of additional space behind the seats, which was intended to be used for luggage. Park Ward’s most creative feature was a power-operated roller blind that could be lowered to cover the rear window.

The latter was seen as a somewhat racy touch for a two-passenger automobile, and along with the extra luggage space, led the car to be nicknamed “Honeymoon Express” by period press, a moniker that has stuck ever since.

The “Honeymoon Express” was the showstopper that it had been intended to be, and after the Earls Court Motor Show, the chairman of Park Ward, having become smitten with it, took it as his personal automobile. Later, during World War II, the car is known to have been used by the London Rolls-Royce dealer R.A. Robertson, who had it finished in camouflage in what was obviously a successful effort to avoid German bombs.

In the 1960s the car passed to Maurice Richmond, who is thought to have purchased the car while on active duty for the U.S. military in England. Richmond used the car regularly, including to attend a Bentley Pageant held at Goodwood with the Bentley Drivers Club in 1967. It was subsequently imported stateside on MS Brasilia, arriving in Los Angeles on 11 July 1967, and remained with Richmond until 2002.

Soon thereafter the car returned to the United Kingdom, where it underwent a concours-quality restoration by the noted facilities of Alpine Eagle between 2006 and 2011. It was displayed at the 2011 RREC Rally, winning its class and the Peter Blond Award, and it was also invited on the Louis Vuitton Classic Serenissima Run in 2012, winning the Coachbuilders, Golden Age prize.

In its present ownership, the car underwent further sorting and concours preparation by RM Auto Restoration, including minor repairs to its finishes and detailing inside and out. Most prominently, 60 hours were invested in the design and fabrication of a correct-style rear window blind, as had been installed in 1939. The power-operated blind was the final touch, bringing this car back to its original “Honeymoon Express” configuration.

Since this work, the car has been enjoyed in North American concours competitions. It was awarded 3rd in Class at the Pebble Beach Concours d’Elegance in 2015, as well as a thrilling 1st in Class at the Amelia Island Concours d’Elegance this March. These have been the car’s only two concours appearances on this continent, thus opening up a world of further possibilities for the new owner to show and enjoy his or her Bentley.

Exceptionally well-known to enthusiasts, the original “Honeymoon Express” appears in Stanley Sedgwick’s All the Pre-War Bentleys As New (p. 114), validating that the original engine and registration numbers are still those present today, as well as in Johnnie Green’s Bentley: Fifty Years of the Marque (p. 202), Michael Ellman-Brown’s Bentley:The Silent Sports Car, 1931–1941 (p. 120), and Neill Fraser and Tomas Knapek’s Bentley Beauty: The Art of the Coachbuilder on the Derby Bentley, 1933–1940 (p. 22). It is documented by a collection of receipts for its Alpine Eagle restoration, copies of detailed build and ownership records from the Hunt House and Rolls-Royce Foundation, and copies of vintage photographs taken throughout its existence.

The “Honeymoon Express” name has been worn by several two-passenger Bentley and Rolls-Royce show cars over the years, but this 4¼-litre was its originator. It stands among the most memorable “Silent Sports Cars” of its generation, both for its high-performance specification and its stunning one-off coachwork that was designed to compete among the greatest showstoppers that Europe had to offer. With similar cars of that era, such as the extant Autobahn Kuriers and Pierce Silver Arrows, largely out of circulation, the opportunity to acquire Park Ward’s streamlined stunner is a singular moment in the history of aerodynamic design. 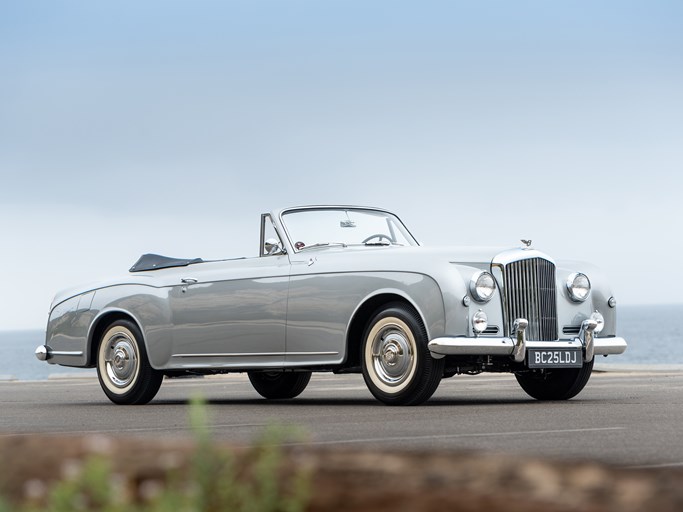