Addendum: Please note that the engine installed in this car is K7BA; it is of the correct type but not the original B7BK as stated in the catalogue.

Rolls-Royce acquired Bentley Motors from Walter Owen Bentley in 1931 and then struggled for two years to design and build an appropriate car, one that would honor the “W. O. Bentley” sporting and racing heritage, yet one that would also not be confused with the more stately cars wearing the Rolls-Royce badge. The timing couldn’t have been any worse, as this was during the Great Depression. Rolls-Royce and Bentley Motors Works’ manager at Derby, E. W. Hives, CH MBE (developer of the Merlin aero engine and later the chairman of Rolls-Royce Ltd.), headed the team that was tasked with designing the all-new Bentley, which was set out to be a sports car that would appeal to a wide range of prospective buyers.

His personal notes read, “Answer to the moods of the driver…be driven fast with safety…tour without fuss and noise…maximum speed should not be obtained at the expense of acceleration…controls, steering, and brakes shall be light to operate, and the braking shall be adequate for a fast car…maximum speed of the car on the road should be 90 mph, 75 mph in third gear.”

The first “Rolls-Bentley,” a 3½-Litre model, was based on the current-series Rolls-Royce 20/25-horsepower chassis, but it was reconfigured to use the 20/25’s 2¾-liter engine. In 1936, the engine output was increased to 4¼ liters by using the Rolls-Royce 25/30-horsepower engine and chassis, but it came with a higher compression ratio (6.8:1 compared to 6:1) and the Rolls-Royce Stromberg downdraft single carburetor was substituted by dual SUs. The result was a fast, silky, exciting car that soon became known as the “Silent Sports Car.”

The Bentley cars that were produced in tandem with the Rolls-Royce cars of the 1930s have been, until recently, overlooked by collectors. This was due in part because they lacked the bulk and presence of the large-horsepower Rolls-Royce Phantom models, and also because so many Derby Bentley cars remained with their original owners in daily service for decades and weren’t offered for sale. They were often referred to as “Derbys,” as they were built in the shared Rolls-Royce and Bentley Motors Works in Derbyshire, England.

As was the custom in the 1930s, the new owner of the rolling Bentley chassis would have it sent to one of the bespoke coachbuilders, and they would build it to his specifications. Of the dozens of Bentley coachbuilders, Park Ward, Thrupp & Maberly, Vanden Plas, H.J. Mulliner, and Gurney Nutting were most often selected. Of the 1,234 Bentley 4¼-Litre chassis produced, over 530 were bodied by Park Ward, and most of them were steel saloons.

Carlton, a more exclusive body builder, bodied only a few Derby Bentley cars. The company was originally known as the E.B. Hall & Company, a North London horse-drawn carriage maker, but it evolved into designing and building very special car bodies on a few select Daimler, Rolls-Royce, and Bentley chassis. After they were licensed to produce the revolutionary Weymann fabric bodies, they changed the company name to Carlton Carriage Company. Of the four Carlton bodies fitted to 4¼-Litre chassis, the car offered here, chassis number B55KU, is the only two-seater open tourer ever built. The others were a sedanca coupe, a saloon, and a four-seater drophead coupe.

Carlton achieved quite an accomplishment with this exceedingly rare two-seat model, as he created a drophead that was just as attractive with the hood up as it was when lowered to its concealed-hood position. By positioning the touring spare in the front wing rather than the boot lid, the resulting profile became streamlined and elegant. The combination of Ace deluxe wheel discs (also known as “Easi-Clean”), a vintage Bentley-type fold-down twin aeroscreen (often called the Brooklands windscreen), a correct slanted Winged B mascot (which must be turned 90 degrees before the bonnet can be opened without chipping the paint), and its original Marschal headlamps and centrally mounted driving lamp result in a seriously appealing body style. Under the bonnet, the correctly restored and impeccable engine compartment properly stores the correct road tools. These are often missing, but they are preserved with this car and tidily fit in a tray under the boot floor’s carpeting. The period-correct color scheme of its midnight blue exterior and saddle tan interior is a perfect pairing.

No detail has been overlooked within the interior, as it was clearly designed for the owner who loves to take the wheel. Among the special-order instruments included with this car, as validated by the accompanying Works chassis card orders, is an extremely rare Smiths tachometer with a clock built into its center top. The instrument layout is equally atypical, with the speedometer and tachometer to the left of the driver’s position, and the ignition and lamp switches have been placed even farther to the left, in front of the single-passenger seat. As the car is a one-off design, it is presumed that this may be one of the first uses for this dash layout before it became standard on later cars.

This car carries no stories, nor feigned history. The entire history of the car is documented not only in original order records and Rolls-Royce Owners’ Club-supplied ownership history but also in the car’s appearance in several archival publications, including All the Pre-War Bentleys as New by Stanley Sedgwick, on page 109, and Bentley: Fifty Years of the Marque by Johnnie Green, where a photo and identifying chassis number appear on page 208.

The car’s first owner was Gordon C. Wood, of Weybridge, Surrey, England, who accepted delivery from renowned Bentley dealer H. R. Owen on July 14, 1937. He clearly was one of the early car enthusiasts, as he specified the car was to be prepared “for use in town and touring.” He went on to compete in several rallies in 1939, including at the Royal Automobile Club’s Blackpool Rally and the prestigious J.C.C. Brooklands Rally.

Mr. Wood sold the car to H. G. Holcroft, of Shropshire, England, on September 18, 1938. On New Years’ Day in 1956, the car was sold to R. Guy, of Wolverhampton, England, who then sold it to its first U.S. owner in 1966. Then, around 1993, well-known and highly respected Bentley owner, restorer, and driver Dale Powers, of Florida, acquired this Bentley, and over the next decade, he managed its complete restoration. Afterwards, Powers and his wife enjoyed the car and participated in numerous car club caravans, tours, and meets. They sold chassis B55KU to Bill Jacobs in 1999, and he had it refinished in its current midnight blue and saddle tan hide interior, and he also had the mechanical restoration refreshed. The current owner acquired the car approximately eight years ago, and he confirms that the car continues to perform as it should and describes it as fast and handling well.

Exceptional and rare unmolested Derby Bentley cars with original engines and coachwork are in great demand by astute collectors. Honest examples like this unique, one-off two-seater open Derby Bentley are a superb investment, and they also provide great enjoyment to their owners while behind the wheel. 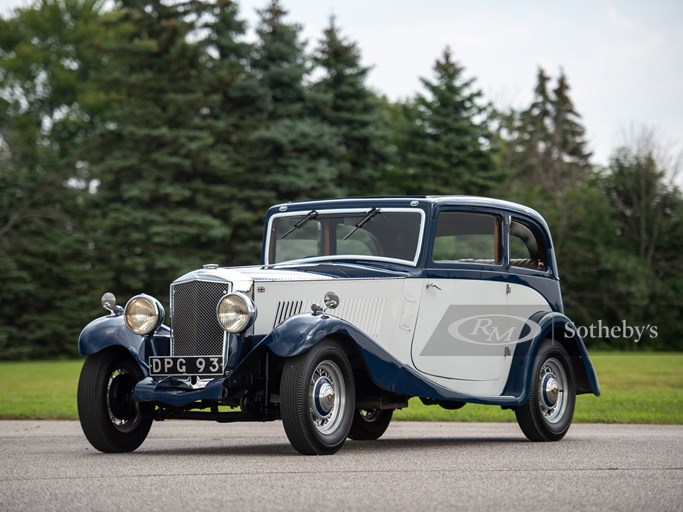