• First R-Type Continental fitted with center gear change; one of 24 built in 1953

• Only 68,000 miles from new; finished in period correct black with tan leather

Rolls-Royce began to experiment with aerodynamic designs in the 1930s. The streamlined Bentley Mk II project, colloquially dubbed “The Scalded Cat,” was one such design. In 1938, the company completed the original Corniche, a prototype for the short-lived Bentley Mark V. After the war, the Works retooled to resume construction of fine motor cars, and experimental designs from the 1930s were revisited. Chief Project Engineer H.I.F. Evernden and designer J. P. Blatchley were assigned to create a lightweight, aerodynamic Bentley capable of carrying four adults in comfort. Their brief was “to produce a car which would not only look beautiful but possess a high maximum speed, coupled with a correspondingly high rate of acceleration, together with excellent handling and roadability...” After creating some lightweight bodies on the Bentley Mark VI chassis, H.J. Mulliner was contracted to design and construct the R-Type Continental prototype. The body, window, and seat frames were made of light alloy, resulting in a four-place body that weighed only 750 pounds, less than 4,000 pounds together with the chassis. After extensive road tests conducted mostly in France, the prototype’s gearbox overdriven top gear was found to be unsuitable for the rpms offered by the engine and was replaced by a direct-ratio top gear and a lower axle ratio. This combination proved best for high speed touring with well-spaced gear changes for city driving.

The resulting R-Type Continental is perhaps the most desirable postwar Bentley of all. Its superior performance over the standard Bentley resulted from meticulous attention to reducing weight and frontal area wind resistance. High speed came with a high price: $18,000 in 1953 US dollars. In 1952, a Cadillac convertible could be bought for $4,110, a Lincoln Cosmopolitan for $3,950, and a Chrysler Crown Imperial cost $6,740; the average home cost $9,000 and gasoline was 20 cents per gallon. Despite this, the new Bentley Continental had a cachet lacking in the luxury American V-8 models, and the first cars, which were for export only, were mostly sold to the United States. This pattern is logical given that the 1950s were seen as the defining decade of the American century and demand for the exciting new Bentley was high. Those with the means snapped up the first cars, and those with an editorial voice unanimously gave rave reviews. England’s best known car publication, Autocar, stated, “A modern magic carpet, annihilating great distances.” Country Life magazine wrote, “There is little doubt that the manufacturers would be entitled to claim this as the world’s fastest production saloon, and yet it is as silent as the average town carriage. The capabilities of the car in acceleration and maximum speed are matched by the power of the brakes and the excellent road-holding, while it’s cornering places it in the same class as the hand-built racing car.” Past chairman of the UK-based Bentley Drivers’ Club Ltd. and prominent Bentley enthusiast, W. E. B. Medcalf, owned two Bentley R-Type Continentals simultaneously for a number of years. He wrote, “Simply to sit in these cars is a beautiful experience; to drive one is among the ultimate physical pleasures. I know of no other car, which, after 45 years’ service, can match these remarkable masterpieces. Even after covering 1,000 miles in a day, driving remains a delight.”

The Continental shared a frame plus many suspension, steering, and brake components with the Bentley Mark VI series and later the standard R-Type. The Continental chassis were assembled in Crewe, England at the Rolls-Royce Works, and then sent by rail to the Lillie Hall Depot in Earls Court, in London. Final modifications were then made, and the finished chassis were loaded onto special transporters and delivered to their designated coachbuilders. While the bodies were being built and fitted, Bentley representatives visited the coachbuilding facilities to ensure all was being done in a workmanlike manner. Upon completion, the cars were tested and inspected thoroughly by Bentley Motors before being delivered to their first owners. H. J. Mulliner was in operation from 1900 to 1968. The most successful and prolific of the Mulliner-named coachbuilding firms, H. J. Mulliner has always been closely identified with Rolls-Royce and Bentley. The coachbuilder name “Mulliner” can be confusing, as H. J. is one of three Mulliner-named firms. Arthur Mulliner and Mulliners’ of Birmingham were two separate British coachbuilding firms in business during the first half of the 20th century. H. J. Mulliner was the largest, and Mulliners’ of Birmingham was probably the smallest. The former produced hundreds of special-order bodies on Rolls-Royce and Bentley chassis. Their postwar Bentley Continental designs, especially these fastbacks, are highly sought after by enthusiasts today.

A total of 207 R Continental cars were built, plus one prototype, an H. J. Mulliner Sports Saloon very similar to this car. Of the 207 production Continentals built from May 1952 to April 1955, 193 were fitted with the prototypical aerodynamic H. J. Mulliner body design known as the “fastback.” The other 14 chassis were fitted with bespoke bodies built by Park Ward, Franay, Graber, and Pinin Farina.

All original chassis numbers for this series begin with “BC,” for Bentley Continental. The numbers run consecutively, omitting “13” in five alphabetical suffix letters: A, B, C, D, and E. The letter “L” before the suffix letter indicates left-hand drive. The example offered here, chassis number BC16LA, is therefore identified on its Works build sheet as being a Bentley Continental A-Series with left-hand drive from new.

BC16LA was ordered with an extensive list of special features, and among those options, this was the first car to be fitted with the optional center gear change instead of the standard steering column shift lever. Although car radios were becoming more popular, the first owner of this Bentley did not order one. The special H. J. Mulliner lightweight seat frames were fitted, and since it was to be used in North America, sealed-beam headlamps, Wilmot Breedon “export” type steel bumpers, high-frequency horns, fog lamps in place of the standard center driving lamp, and American flasher-type turn indicators were fitted using a steering-wheel mounted stalk rather than the fascia-mounted timed levers, as standard on home market cars.

After final testing, BC16LA was shipped to San Francisco via the SS Loch Garth on January 15, 1953, for display by West Coast dealer Kjell Qvale. Returned to England in 1954 by the first owner, it was then flown to Le Touquet, France on April 26, 1954. The Bentley Register states that in 1965, a 3¾ bore engine was fitted, with the original engine, BCA15, being fitted to another chassis, but the owner reports that the current engine is in fact BCA15, which may indicate incorrect registry data or reinstallation of the original engine. It is known that BC16LA was stored for many years, until being purchased in 2002 by well-respected collector and former chairman of the prestigious Pebble Beach Concours d’Elegance, Mr. Glenn Mounger, who directed its recommissioning. The Bentley R-Type Continental is the cornerstone of any important Bentley collection. A mere 24 examples were built in 1953, compared to 42,625 Cadillacs built that year. All of the H. J. Mulliner fastback coupes, which were referred to by the factory as saloons for tax purposes, were superbly finished and quickly became the most readily identified of the Continental series, despite their rarity. Rarity, refinement, and reliable engineering suitable for extended high-speed touring resulted in a car that always commands a premium.

The combination of its smooth and powerful, no-nonsense, inline six, coupled with its silky smooth gearbox and responsive handling, results in a car that is as pleasant to drive as it is to view. Indeed, there are few 60 year old cars that can maintain a cruising speed of 100 miles per hour without undue stress or trouble. Knowledgeable Bentley enthusiasts recognize this model as being the one to own and to drive; owing to its beauty and desirability, the R Continental is perhaps the only postwar Bentley with near value parity in right- or left-hand drive configuration. Values of R-Type Continental cars have been steadily appreciating; the new owner of BC16LA can look forward to years of enjoyment and, with proper maintenance, steady appreciation in the future. 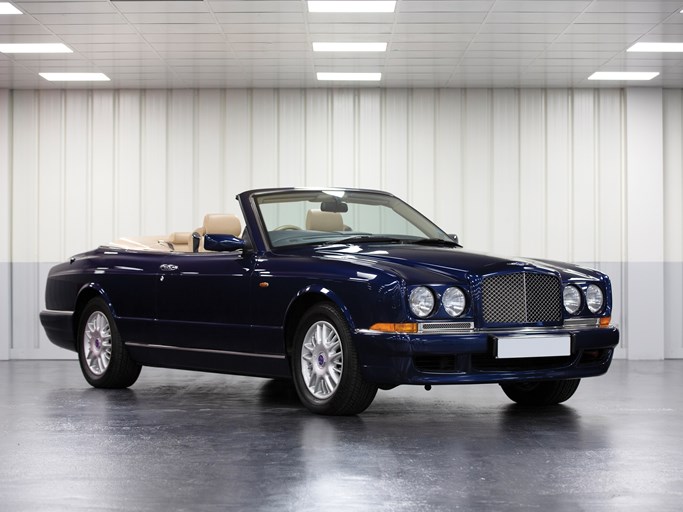 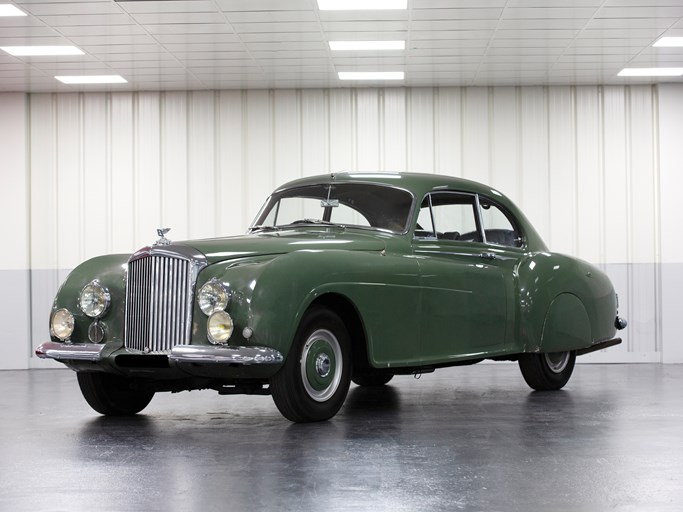 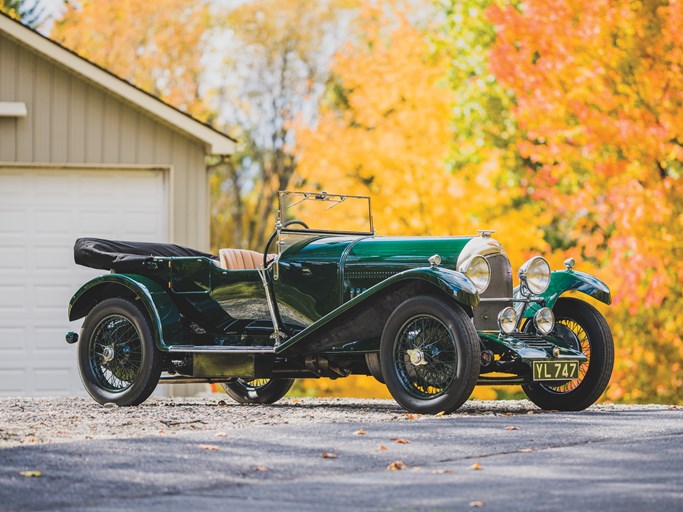 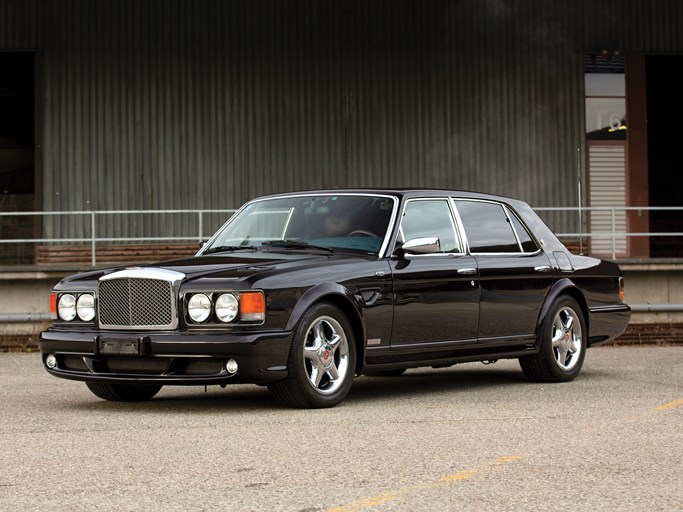