Chassis No.
ZA9AB01E0RCD39092
Engine No.
0122
Body No.
102
Aerospatiale Chassis No.
108
Documents
Danish Registreringsattest
Please note that this lot is titled as a 1995.
Addendum: Please note that an import duty of 2.5% of the purchase price is payable on this lot if the buyer is a resident of the United States.

To bring a long-dormant automotive marque back to life is no mean feat, and the stakes are even higher when the marque in question is as hallowed as Bugatti. In the late 1980s, Italian entrepreneur Romano Artioli rose to this challenge, and while his dream was relatively short-lived, the vehicle he brought to fruition—the Bugatti EB110—is truly regarded as a worthy successor to the legendary nameplate.

After several years of relentless development, with the anticipation of production success, Artioli went so far as to commission a stylish modern factory for the reborn automaker the scale of which testified to his ambition. One even suspects that Ettore Bugatti himself would have appreciated the size and grandeur of the impressive, architecturally imposing facility. Artioli’s iteration of Bugatti was located in the high-performance hotspot known as the Motor Valley—Modena, Italy. This area has produced some of the world’s most desirable supercars for decades, and its concentration of knowledge is arguably greater than anywhere else on the planet.

Yet the cars produced at that facility were even more impressive. Named in honor of Ettore Bugatti’s 110th birthday, the EB110 model was the first of a planned range of offerings. It was built on a chassis originally conceived in aluminum by the great Paolo Stanzani, and later reimagined in carbon fiber by Nicola Materazzi, chief engineer of the Ferrari F40.

Carbon fiber has since become de rigueur in modern supercars, and it is notable that construction of the groundbreaking frame was contracted to the French aerospace concern Aérospatiale. The advanced composite material was selected because the originally planned aluminum honeycomb was found to be too flexible for an ultra-high-performance mid-engine machine. This chassis was wrapped in striking bodywork that, in production form, combined elements of a concept design by the legendary stylist Marcello Gandini, with refinements by Giampaolo Benedini (an architect related to Artioli).

For power, the EB110 GT was equipped with a distinctive 3.5-liter quad-turbocharged 60-valve V-12 mated to a six-speed manual transmission. A finely tuned all-wheel drive system, yet another foreshadowing of today’s supercar technology, helped tame the V-12’s 553 horsepower while ensuring that the EB110 would be as tractable as it was trackable. The proprietary mill was capable of launching the EB110 from standstill to 60 mph in just 4.4 seconds, with a top speed of 212 mph. As the accomplished racing driver Phil Hill opined after testing the model for Road & Track, “You can cruise at over 200 mph like you’re on an ordinary road. It’s just an outstanding car.”

Delivering world-class performance packaged in aesthetically refined yet sporty coachwork, the EB110 GT was built in a modest quantity of just approximately 85 examples. Prized by both marque collectors and supercar aficionados, the model has evolved to encompass a very special cachet, viewed as a unique mid-point between Ettore Bugatti’s original concern and today’s Bugatti S.a.S. Without this model represented, no Bugatti collection can truly be deemed to be complete.

Claiming a short ownership chain of just three private caretakers, as well as regular service by a noted marque specialist, this EB110 GT is a particularly desirable example of Artioli’s celebrated supercar. According to the combined information of factory build records on file and a history report prepared by the Bugatti EB110 Registry’s Johann Petit, serial number GT092 was ordered in January 1994 and earmarked for delivery to the German market.

Specified as a GT example, the Bugatti was finished in Grigio Chiaro paint over an interior trimmed in Grigio Scuro upholstery. Completed in September 1994, the EB110 GT was delivered two months later to the dealer Auto Koenig, and sold to an owner based in Mulheim, Germany, in January 1995.

In September 1999 the Bugatti passed from the first owner to Franco Pastorelli, a Netherlands-based specialist whose shop Franco Auto has become renowned for expertise in tending to EB110 examples. Pastorelli serviced GT092 and sold it to an enthusiast residing in The Netherlands. Franco Auto service invoices dating from 2004 to 2017 demonstrate regular care for the Bugatti over the next 14 years. Believed to have enjoyed single private ownership for the entirety of its chapter in The Netherlands, the EB110 GT was regularly driven, and it even participated in local tourist rallies such as the 2014 Hertzberger Trophy.

Following the owner’s passing the Bugatti came into the purview of his widow, and in July 2018 the EB110 was acquired by its third private owner, an enthusiast in Assens, Denmark, who maintains a large collection housed in a private museum. GT092 was notably displayed between the owner’s Bugatti Type 46 and his Bugatti Veyron. According to an invoice on file, in October 2022 the car underwent a service/refurbishment in preparation for its current availability that cost 165,817 Danish krones (the equivalent of $21,784).

Accompanied by an owner’s manual, marque literature, a factory toolkit, and a rare and desirable luggage set, this nicely presented Bugatti EB110 GT is a well-maintained example that offers miles of future motoring enjoyment. As one of just approximately 85 production cars finished to GT specifications, serial number GT092 claims rarity in addition to its top-shelf design, engineering, and build quality.

As an unmodified example that retains matching-numbers engine, body, and chassis stampings (per factory build sheets on file), and with all its body-number stampings clearly visible, GT092 is well documented with a prior registration, Franco Auto service invoices from 2004 to 2017, factory build sheets, and the history report by the EB110 Registry. This seminal supercar would make a special acquisition for any enthusiast, particularly suited to collectors of modern supercars or the Bugatti specialist seeking to add an example built during Romano Artioli’s celebrated 1990s stewardship of the legendary marque. 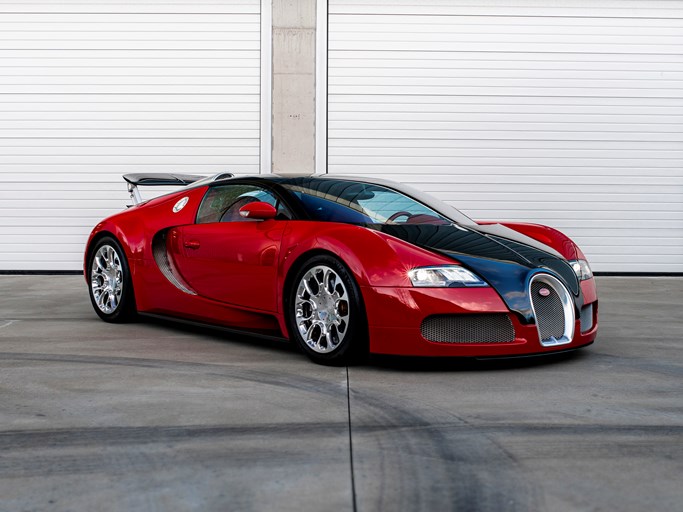 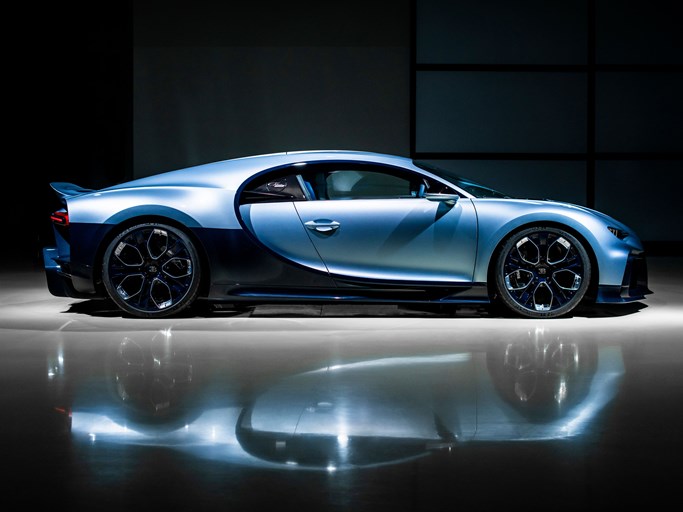