Automotive history is rife with designs for cars that were drawn but never built. Most of these have been forgotten in the cobwebs of time. Once in while, however, a seminal sketch is spotted and its creation taken up where the pen left off by a latter day coachbuilder. Such is the story of this Cadillac Sixteen Fleetwood Custom Phaeton.

The car was built in the early 1980s by the renowned Chicago-area restorer and craftsman Fran Roxas. It began life as a rendering in a catalog of Cadillac’s Fleetwood bodies. Although given a number by the company, it was intended as an example of what could be done for an individual customer, who, so far as is known, never materialized, and thus the body was never built.

Roxas decided to pick up at the point that the hypothetical customer might have appeared. In order to build the Style 5859 Custom Phaeton, he engaged well-known designer Strother MacMinn, an industry veteran stylist and instructor at the Art Center College of Design in Pasadena, California. MacMinn worked with GM Head of Advanced Design Dave Holls, who obtained full-size factory blueprints for the first-generation Sixteen chassis.

The donor car for this latter day classic was a low-mileage 1937 Sixteen Series 90 Seven-Passenger Limousine, Body Style 5875. The entire chassis was retained, as were body parts that could be used, principally grille, hood, floor pan and fenders, although for some elements modifications were necessary.

The original renderings were noteworthy in their simplicity and sophistication. The side-mount spare tires seen on so many Cadillac Sixteens were absent. Nor was there an external rear spare, an accoutrement that had all but disappeared from Cadillacs by 1933. Instead, the fifth tire and its necessary tools were housed in an enclosed luggage compartment.

True to the catalog rendering, the car is a dual-cowl phaeton, the rear windshield vee’d like the front. It has full skirts on the rear fenders, with large circular art deco emblems, pierced by a narrow molding. The car is painted jet black and upholstered in brown leather. The dashboard is a body-color example of the handsome Sixteen panel, nicely set off by a black banjo-spoke “Flex wheel” steering wheel. In the rear compartment is an auxiliary dashboard with a Jaeger clock in the center and two compartments with burled walnut doors. Carpeting matches the upholstery throughout.

Particularly notable is the fact that the top disappears entirely once it is lowered, beneath a hinged metal cover. For situations when the full top is not desired, there is a tonneau cover, housed in the luggage compartment when not in use.

Although Roxas built the car for his own use and enjoyment, he eventually sold it. In 1984, the car was shown at Pebble Beach, where it won First in Class in the New Coachwork Class. It made an appearance at Pebble Beach once again in the same class in the mid-1990s, remarkably placing second after the restoration had already been ten years old. The car was acquired by the Milhous Collection in 1998. Today it remains essentially as created in the Roxas workshops, straight, clean and in excellent condition.

Restoring a complete car, although requiring skill and experience, is a comparatively straightforward task. Constructing a car where none has existed, however, is a much more daunting exercise. This car is proof that it can be done and is a testament to the talents of Strother MacMinn, Dave Holls and Fran Roxas. 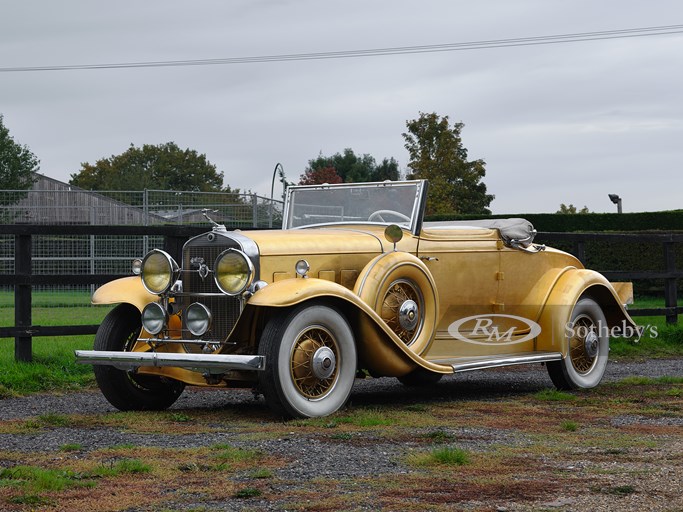