Addendum: This car is offered for sale out of long-term storage and we recommend that it should be serviced prior to use.

One of the most significant and sought-after air-cooled 911s ever produced, the RS 2.7 was the first of the line to feature the “Carrera” moniker. The name honoured Porsche’s success at the Carrera Panamericana rally of the early 1950s, while this was also the first 911 to wear the now-famous “RS” designation, which stands for “Rennsport”—or “motor racing”—in German. Aptly named, the Carrera RS 2.7 stemmed from Porsche’s efforts in the early 1970s to create a 911 for FIA Group 4 competition, which required 500 road-going examples for homologation. As such, the Carrera RS 2.7 blurred the lines between road car and race car, establishing a revered legacy for the 911 that endures to this day.

To create the RS 2.7, Porsche increased displacement of the 2.4-litre, flat-six engine from the 911 S to 2.7 litres, added Bosch mechanical fuel-injection, and lined the cylinders with low-friction Nikasil. Output was a claimed at 210 brake horsepower and 188 ft lb of torque, while stiffer suspension, larger brakes and larger wheels improved chassis dynamics. The exterior featured wider wings, a redesigned front bumper, and a distinctive “ducktail”—the first factory spoiler ever attached to the sloping rear end of a 911.

Though the FIA requirement was pegged at only 500 examples for Group 4 homologation, demand pushed Porsche to produce 1,580 units of the 911 RS 2.7 in 1973. A mere 200 were ordered through the factory for “M471”-specification Lightweight conversion, making the example offered here rare indeed. The current and sole owner of this exceptional example claims to have read contemporary road tests when the model was new, and was struck by its instant appeal. Though the long-term owner initially struggled to source a car easily through an importer in their domestic Italy, they travelled to Germany to take a Porsche from its homeland. The dealership Auto-Dunker GmbH, based in Aschaffenburg, near Frankfurt, was able to oblige and so the car offered for sale here was ordered in April 1973.

The options list extended to “M471” (Lightweight specification), with “M458”—a headrest for the front seats. On an additional document from the dealer, the original order also included “M489” for seatbelts, “M462” for Carrera livery applied on the side of the car, and “M220” for a desirable limited-slip differential. The 911 Carrera 2.7 RS Lightweight left the factory finished—as it is today—in Light Yellow over a black interior. The original German pflegepass—or service book—is first dated 12 July 1973 and is included as part of the sale, along with the original dealer invoice and sales documents. Furthermore, an air compressor, a spare wheel and tyre, tools, and an extra set of wheels are present with the car.

Over the long years of sole ownership, the owner personalised the Porsche with items such as the black finish on the exterior mirror to replace the chrome alternative, and on a more practical level, the two rubber straps that lock the rear engine lid were deteriorating regularly due to the heat of the engine, so they have been replaced by the commonly found “M472” lock. Remarkably well preserved and thought to be highly original—and cherished by a single owner from new—this rare 911 Carrera RS 2.7 Lightweight with matching-numbers chassis, engine and transmission is an exceptional find for any Porsche enthusiast. 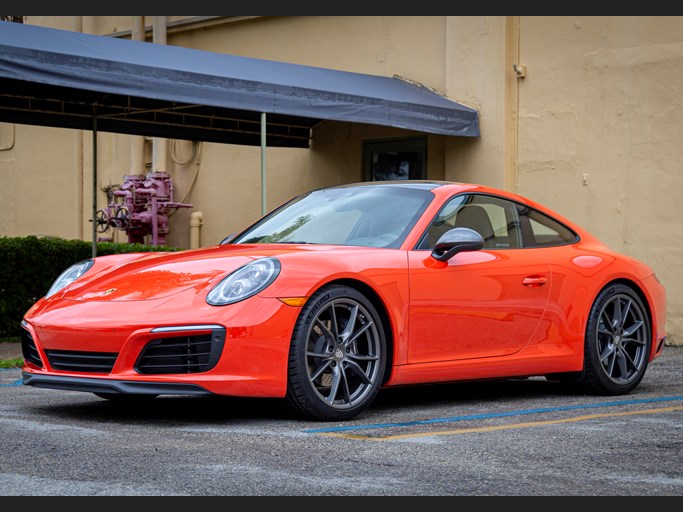