The pairing of Jones and Lammers secured 5th at the 1988 Road America 500 km.

In the midst of Porsche’s firm grip over prototype-class racing throughout the 1980s, bosses at Jaguar were found wanting for their own competitive success, which the English manufacturer had been part of in prior decades. Alongside key privateer teams, plans were made to propel Jaguar back to the forefront of endurance motorsport, heralding a new era of “Big Cats”, and eventually morphing into a successful factory team venture.

A development project was sparked in 1982 when, with the blessing of Jaguar, Virginia-based privateer team Group 44 Racing, led by Bob Tullius, worked with Fabcar to ready the XJR-5 for competition in the IMSA GT Championship. The XJR-5 began as an out-and-out endurance racer featuring a low-slung, mid-engine body shape built for aerodynamic gains over a great distance, twinned with a powerful 6.0-litre V-12 powertrain. The U.S. team quickly found success with the XJR-5, scoring an overall victory at the Road Atlanta 500 Kilometres in 1983, and the car was campaigned valiantly by Group 44 in the 1984 and 1985 editions of the 24 Hours of Le Mans, securing a GTP class win at the second attempt.

It was clear, however, that the XJR-5 was still relatively under-gunned when up against the fastest cars on the grid, with Jaguar harbouring ambitions to eventually play a strong hand against the likes of Porsche at Le Mans. In tandem with Group 44, Jaguar would work with Tom Walkinshaw Racing (TWR), closer to home with a base near Oxford, with intentions of entering a car into the newly formed Group C World Championship.

TWR’s first full season in Group C was in 1986. With an overall victory at the 1000 km of Silverstone in May, the team was feeling confident heading to La Sarthe the following month. Unfortunately, the following months would shape up to be a difficult year for the “Big Cats” at Le Mans, as none of the three cars entered—by this point, coined the XJR-6—would finish. Over the winter, TWR worked tirelessly to create the new XJR-8, a name awarded considering the Group 44 team’s latest IMSA GT racer was designated the XJR-7. This would be a shot in the arm for TWR and Jaguar, as the XJR-7 dominated the 1987 World Championship. It claimed eight outright victories over 10 events. However, Jaguar’s luck at Le Mans continued to falter, with Porsche continuing their dominance of Circuit de la Sarthe; the XJR-9 would put paid to that.

Constructed from carbon fibre and Kevlar materials, the monocoque for chassis TWR-J12C-388 began life in mid-July of 1987 at Advance Composite Technology in Derbyshire, with the final product finished in October of the same year. The first three XJR-9s, chassis 188 (converted from an earlier chassis and renumbered), 288, and this car, 388, were then sent out for special testing that had been organised by Jaguar at Big Spring in Texas. This car completed over 400 miles of testing while TWR hunted for the perfect set-up. The next outing for chassis 388 was at Talladega in January 1988, in preparation for the gruelling 24-hour meeting at Daytona later that month. Unfortunately, wearing race number “61”, the first race of that year’s IMSA GT Championship did not go to plan for this car with drivers Danny Sullivan, Davy Jones, and Jan Lammers finishing 26th, although its Castrol Jaguar Racing sister car that wore the number “60” won on the XJR-9’s competitive debut.

The rest of the season brought relative success for this car, albeit without any outright victories. After placing 7th at the 12 Hours of Sebring, highlights in the year included 2nd at the West Palm Beach 3 Hours, 3rd at the Lime Rock 150 Laps, 3rd at the Mid-Ohio 500 km, and 3rd again at the Sears Point 500 km. Over the following year, the Jaguar fared better. To start the 1989 season in February of that year, chassis TWR-J12C-388 finished 2nd at the 24 Hours of Daytona. Remarkably, the car would place 2nd in the next four IMSA races, including at the Miami 3 Hours, 12 Hours of Sebring, Road Atlanta 500 km, and West Palm Beach 3 Hours. A 3rd-place finish followed at the Lime Rock 150 Laps, then 2nd at the Mid-Ohio 500 km, and 3rd at the Road America 500 km.

Jaguar entered two cars at Daytona in 1990, with Jones, Lammers, and Andy Wallace driving this chassis. Both Jaguars were out-muscled in qualifying by turbocharged competitors, but the XJR-9’s strength lay in its reliability and strong race pace over many hours. As the night rolled in, the cars at the front of the pack continued to encounter a growing number of problems. As dawn rose, the two Castrol Jaguars were running well clear of the 3rd-placed Porsche by an astounding 16 laps. However, the rising sun also led to rising temperatures, and both Jaguars began to overheat. The team decided to pit the cars and flush the radiators, handing time to the hungry Bayside Porsche. After a tense final few hours, relief came when Lammers brought chassis 388 across the line in 1st, to win IMSA’s greatest race. Chassis number 288 would finish just behind its sister car, for an extraordinary 1-2 Jaguar finish. To further prove 388’s winning credentials, it scooped the prize of fastest lap as well.

After much celebration, chassis TWR-J12C-388 returned to the track in March for the 12 Hours of Sebring. Another difficult qualifying session resulted in this car lining up 12th on the grid, but after another contentious race, chassis 388 had scythed though the field to come home on the podium once more, this time in 3rd place, rounding off its hugely impressive racing career in true Jaguar fashion.

Subsequently, the Jaguar was retained by the TWR museum until it was disbanded in 2003, prior to being completely restored in 2006. Importantly, this XJR-9 would be welcome to historic motorsport events around the world, such as Le Mans Classic and Peter Auto’s Group C Racing.

Undoubtably a true icon of sportscar racing, the opportunity to own 388, an endurance racing legend, must not be missed. The sheer excitement of its thunderous V-12 engine is enough to appeal to most, while its stunning looks are for many the archetypal shape of the Group C era. 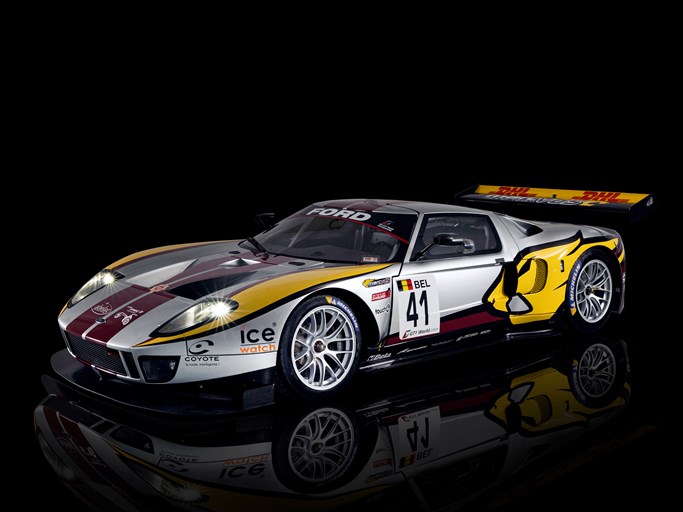