Chassis No.
SAJJEAEX7AX220829
Please note this car has no original registration document present. Please check with your local authority prior to purchase regarding restrictions on registering the car in your local jurisdiction.
Please note that this lot is sold on a Bill of Sale.
□ TEMPORARY IMPORT (UK)

The appointment of incoming Chairman Sir John Egan in 1980 heralded a new era for Jaguar. Intent on improving profitability, workforce relations and quality control—and, critically, subscribing to the new Thatcher government’s encouragement of private enterprise—in 1984 Egan presided over Jaguar’s divorce from the government-owned British Leyland, of which it had been part of since 1975. Newly liberated from the corporate inertia which had hampered the company for many years, Egan made no secret of his enthusiasm for high performance cars and of his desire to return Jaguar to the racetrack; the ultimate aim being victory at Le Mans once again.

Having headed up Jaguar’s ETCC XJ-S programme in the early 1980s via his eponymous TWR squad, Tom Walkinshaw was a natural choice to run their new-for-1985 Group C Sports Car programme. Afforded virtual autonomy by Egan, Walkinshaw fulfilled his brief admirably, with TWR securing three World Sportscar Manufacturer titles and two wins at both Le Mans and Daytona in the next six years.

The genesis of the XJ220 programme went back as far as 1988, with the unveiling of a V12-powered four-wheel drive concept car at the Birmingham Motor Show. The reaction to this initially decidedly “after hours” project was hugely positive, although Jaguar subsequently decided that it was unfeasible to develop and construct a production version in house, preferring instead to enter into a joint venture with TWR. Indeed, a new company—JaguarSport Ltd.—would be established to produce the car at a dedicated factory in Bloxham, Oxfordshire.

For the production car, JaguarSport abandoned the idea of using a normally aspirated V-12 in favour of a more compact and emissions-compliant twin-turbo V-6 unit, a racing version of which had been previously used in TWR’s XJR-10 and XJR-11 Group C chassis. The concept car’s ingenious bonded honeycomb aluminium chassis was retained however, as was its conventional wishbone and coil spring suspension, although its four-wheel-drive system was also dropped on the grounds of cost and complexity. On completion, it was undeniable that, finally, a genuine road-going Jaguar Sports Car had been born, with designer Keith Helfet cleverly managing to accommodate subtle styling cues from the car’s illustrious C, D and E-type forebears—not to mention echoes of Jaguar’s only previous attempt at a rear-engined car, the glorious XJ13. Furthermore, its top speed of 213 mph rendered it the fastest production car in the world at the time, as had been the XK120 in 1949.

Between 1992 and 1994, some 281 XJ220s were constructed, of which this magnificent Right Hand Drive example is believed to be the 72nd example built. Delivered in the appropriately named colour of Le Mans Blue with black leather interior, the car was purchased by renowned historic car specialists Talacrest Limited who retained it until October 1994. At this point it was sold—with a recorded odometer reading of just 100 miles—to Singapore Ferrari Concessionaire Hong Seh Motors Pte Limited. Although principally Ferrari agents, Hong Seh were certainly no strangers to the XJ220, having previously sold no less than six examples to the Brunei Royal Family prior to the acquisition of this particular chassis. The Jaguar arrived with its incumbent Singaporean keeper in October 1995, and was registered in Malaysia in 1996, though the car has been stored in Singapore since.

After a period in long term storage, Hong Seh entrusted the car to marque specialists Don Law Racing, of Newcastle-under-Lyme, Staffordshire for sympathetic recommissioning between May 2017 and August 2018. Having purchased all remaining factory XJ220 spares, patterns and tooling directly from Jaguar in 2007, the latter were uniquely qualified to carry out the necessary repairs to “829”, which included a complete engine rebuild, replacement of the entire fuel system, refurbishment of the cooling and air conditioning systems, the overhaul of all four brake calipers, hubs and dampers, and a full re-spray. In addition to this, the car was treated to a new windscreen, roof screen and a set of original specification Bridgestone tyres; the total expenditure during this period totalling almost £89,000.

Remarkably, even as it approaches its fourth decade, chassis 829 has covered a mere 295 miles from new, making it arguably the lowest mileage XJ220 recently offered for public sale. This accolade, combined with the car’s two owner provenance, recent expenditure and other-worldly performance surely render this the opportunity of a lifetime for anyone seeking to augment their significant Jaguar or Supercar collection with an example of this truly remarkable landmark design. 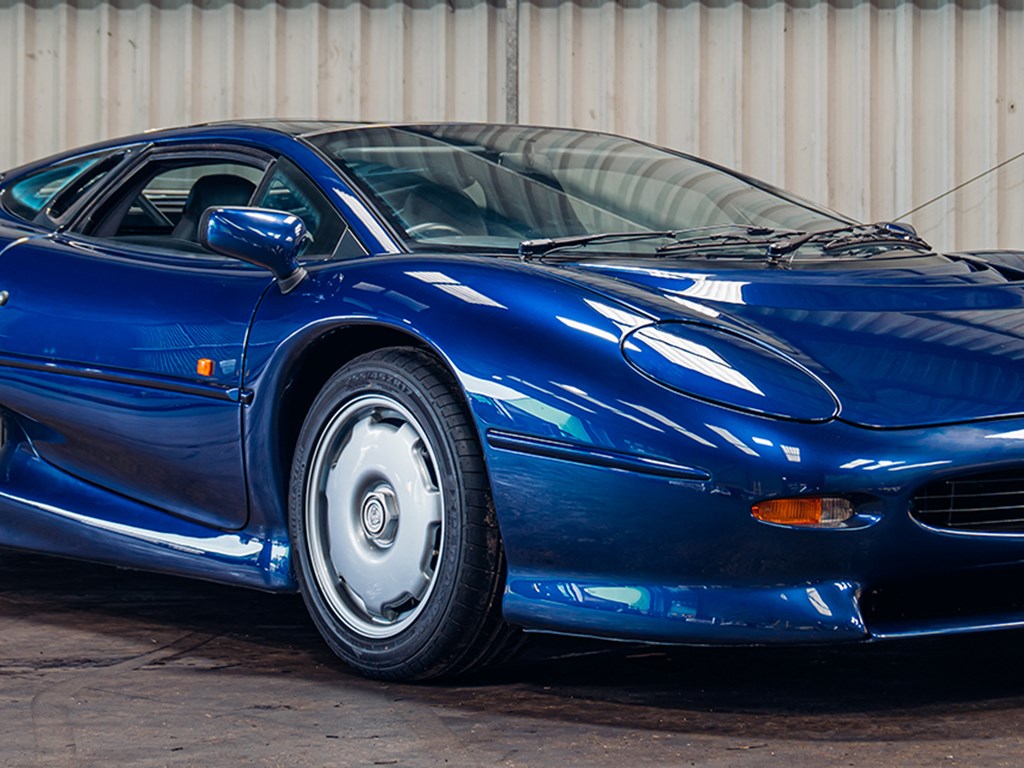 A Super Cat: Arguably the Lowest-Mileage XJ220 to Be Offered Recently at Public Sale Is Coming to RM Sotheby’s London Auction