The XJR-11 of Jan Lammers and Andy Wallace holds it own against the highly successful Mercedes-Benz C11.

Some of the most advanced race cars in motorsport history have remained overlooked because they suffered from unfortunate timing, paling in importance because they metaphorically collided with a slightly better competitor, or were made obsolete because of sanctioning body rule changes. Such is the case with Jaguar’s potent XJR-11, developed by competition partner Tom Walkinshaw Racing (TWR) for use during the 1989 and 1990 Group C seasons, hot on the heels of the XJR-9’s phenomenal 1988 season, highlighted by a victory at the 24 Hours of Le Mans and clinching the drivers’ and manufacturers’ championships for sports prototypes.

The XJR-9 had employed a highly developed version of the naturally aspirated V-12 that Jaguar first conceived in the 1950s, and Tom Walkinshaw realized the aging powerplant had reached the end of its competitive lifespan. He concluded that a lighter turbocharged motor would be required to excel under Group C regulated fuel limitations and to match the new engines in the Sauber-Mercedes C11.

By the end of 1988, Walkinshaw identified a basis of replacement for the V-12, tabbing the turbo V-6 that Austin-Rover had used in its mid-1980s Group B rally car, the 6R4. This powerplant was developed into the all-alloy JRV6 motor, which was engineered to displace 3.5 litres for Group C racing and 3.0 litres for IMSA GT competition in the United States. Approximately 220 pounds lighter than its V-12 predecessor, the JRV6 employed twin Garrett turbochargers to develop roughly 750 bhp and was wired to a special boost button that the driver could unleash coming out of corners. With slightly varying specifications, the IMSA car was dubbed the XJR-10, while the Group C model was dubbed the XJR-11.

Despite its outward similarities to the prior XJR-9, the XJR-11 utilized a brand-new design by Tony Southgate, including a fresh monocoque from Advanced Composites, and the sidepods and rear deck were both lowered. Steering geometry was improved with all-new settings further aided by a longer wheelbase. These developments combined to provide a lower centre of gravity and increased downforce.

Testing commenced in January 1989, and in May the IMSA-specified XJR-10 debuted at Lime Rock. Despite being developed first, the 3.5-litre XJR-11 did not appear until July 1989, when the first two cars were entered at the Brands Hatch 480 KM. The coachwork was finished in the unique purple-and-yellow livery of the Silk Cut cigarette sponsorship, which continued from the XJR-9. Chassis number 189 finished in 5th place, while the featured car, originally born as chassis no. 289, was forced into early retirement with distributor issues, driven by Davy Jones and Alain Ferté.

Chassis number 289 next appeared at the Nürburgring in late August 1989, where John Nielsen and Andy Wallace finished 5th. Teething problems continued over the Jaguar’s next two outings, with DNFs recorded at Donington in early September and at Spa two weeks later.

Late in the 1989 season, future Ferrari F1 technical director Ross Brawn was hired to consult on design development, and a third car (chassis no. 490) was built with a wider track. Simultaneously, new mechanical developments such as Bosch fuel management and carbon ceramic brakes were introduced to the first two cars.

During the first half of 1990, chassis no. 289 finished 4th at Monza in late April while driven by Wallace and Jan Lammers, and the two drivers formed the second half of a 1-2 finish at Silverstone in late May (in the XJR-11’s most complete performance). From this race forward, the car assumed a new chassis number, as chassis no. 590, in what was a regular redesignation practice by TWR.

Wallace and Lammers drove chassis number 590 to another 2nd-place finish at Spa in early June and finished 4th at Dijon in late July. The pair achieved 4th again at the Nürburgring in mid-August. By this point, the car had been renumbered yet again by TWR as chassis number 1290, and Wallace was joined by Jones for the season-ending race in Mexico, returning to the podium with a 3rd-place result.

With the twelve-cylinder XJR-12 winning Le Mans in June 1990, and the XJR-14 under development for 1991, the XJR-11 was essentially retired from Group C competition, sure to no longer be competitive under 1991 FIA rule changes forbidding turbocharging. The model continued to see action for one more season, however, with TWR entering two of the cars under the Suntec banner in the 1991 Japanese Sports-Prototype Championship. The car was renumbered back to 590, the chassis number it retains today, and became a secondary support car for chassis no. 490, never actually participating in any of the five Japanese races that TWR entered.

After being shelved by TWR for most of the 1990s, this XJR-11 was sold in the later part of the decade to Paul Spires, the esteemed president of Aston Martin Works, who entered the car in a handful of Group C celebratory events, including a June 1999 event at Donington. Acquired shortly thereafter by XJ220 specialist Don Law Racing, the XJR-11 occasionally appeared at subsequent events highlighting Group C and Jaguar prototype race cars while being fastidiously maintained in the original Silk Cut livery. More recently sold to the consignor, this fabulous XJR-11 is one of only three examples built and one of two produced in the original 1989 configuration.

By the end of its competitive career, the XJR-11 participated in an incredible 13 races between 1989 and 1990, of which the accomplished driver Andy Wallace drove in 12. Having spent so much time behind the wheel, Wallace remembers the car quite fondly and remarked on how the advanced model was eclipsed only because of the timing of its appearance. ‘The [XJR-11] was actually a massive step forward on the V-12 Jags,’ Wallace concluded. ‘It was a great car, but it just happened to coincide with one of the greatest sports cars ever, the Mercedes C11.’

The engineering link between the marque’s two most recent Le Mans–winning models, this XJR-11 would make a superlative addition to any group of prototype competition cars, as an ideal acquisition for the consummate race car collector or Jaguar specialist. 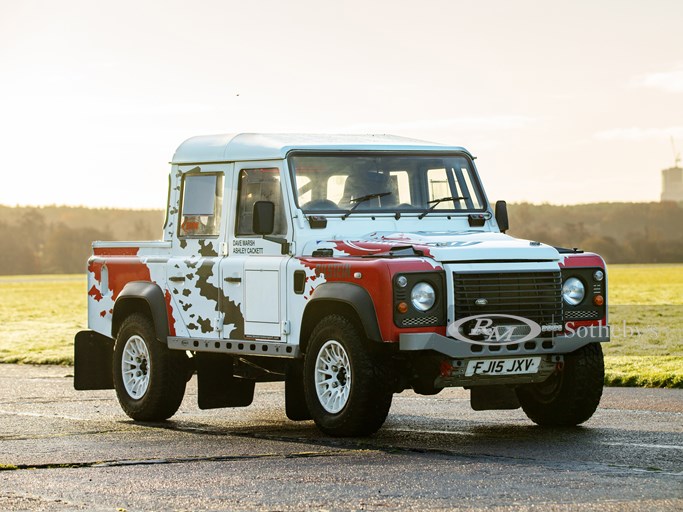