Throughout the 1950s, Maserati had achieved extraordinary results in Grand Prix and sports car racing around the world despite operating with a budget many times smaller than its competitors. Under the control of the Orsi family, the company’s reputation had flourished with the 250F and 300S, but the financial health of the company left much to be desired.

It was becoming increasingly clear that to fund Maserati’s racing activities, the company would have to go beyond producing virtually one-off road cars and move into the business of production road cars. Adolfo Orsi’s son, Omer, was given the task of leading the production of road cars. Nineteen fifty-seven would prove to be a major highlight for Maserati, with Fangio clinching his last World Championship with the 250F, the 450S placing 2nd in the World Sportscar Championship, and the launch of the 3500 GT at the Geneva Motor Show to great acclaim.

The 3500 GT was powered by a 220-brake horsepower, hemi-head, 3,485-cubic centimetre inline six-cylinder developed from Maserati’s successful sports racing cars. The engine was accompanied by an all-synchromesh ZF S4-17 four-speed gearbox. The body was available as either a 2+2 coupé or convertible, the most popular specification being the Carrozzeria Touring coupé with the Milanese coachbuilder’s aluminium Superleggera technique being used. With this specification, it is very easy to see why so many commentators in period drew direct comparisons with Aston Martin’s highly regarded DB4.

According to factory records, this 3500 GT Touring coupé, chassis number 954, was produced on 14 July 1960 and delivered to the official Maserati concessionaire for the United Kingdom, Colin Murray of Fleetwood in Lancashire. By 1964, it had made its way down to London, which is where the current owner, age 26, spotted it for sale with a dealer on Edgware Road. Immediately taken by the idea of owning a Maserati, the current owner bought it and started an ownership which remains unbroken up to today. During the late ’60s, this Maserati was driven everywhere and used for family holidays. With a third child on the way in 1971, the decision was taken to put it into storage. It remained carefully stored for the next 17 years until 1988, when it was taken out of hibernation.

Since then, it has been actively driven and maintained with a considerable amount of mechanical work being carried out by respected Maserati specialist Bill McGrath. The most extensive part of this work was carried out in 2009, when the matching-numbers engine was treated to a full rebuild along with other mechanical work, including a new clutch and fuel pumps. A front suspension rebuild with new ball joints was completed in 2012. Only 1,438 miles have been covered since, and the current odometer reading is 61,214 miles. Cosmetically, this 3500 GT is presented in highly original order, with the paint believed to be original, although both the paint and interior could benefit from some attention. It should be noted that the original radio accompanies this 3500 GT, along with the original owner’s manual, as well as invoices and photographs from Bill McGrath’s work completed in 2009.

Extraordinarily rare in right-hand drive, this Maserati 3500 GT presents a wonderful opportunity to purchase a beautiful ’60s GT with single ownership history from 1964. In the words of Gregor Grant, founder of Autosport, “. . . this is a masterpiece, offering high-speed travel with luxurious comfort . . . one of the most fascinating high-performance cars of our time.” 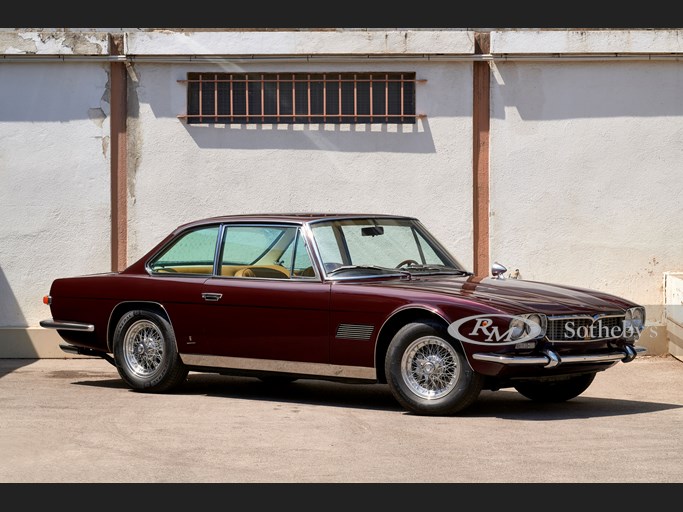