The SS, or “Super Sport,” option was available for the first time in Chevrolet’s 1961 catalogue, and in 1962 it became a separate sub-series within their Impala lineup, offering both coupe and convertible models.

The SS models included special badging and wheel covers, side molding inserts, an engine-turned rear cove molding, and bucket seats with console—for just $53.80 extra. No wonder so many chose the SS option! The package also included chassis enhancements, and springs and shock absorbers which were beefed up. Other ingredients were power steering and brakes, metallic brake linings, a column-mounted tachometer, spinner wheel covers, and narrow whitewall tires. Most prominent was a grab bar for the right front passenger, hinting at the power that the Super Sport could deliver.

Coinciding with the debut of the Impala SS option, the 409 “Turbo Fire” V-8 engine was a bored and stroked version of the big-block 348, itself introduced for the 1958 model year. Initially rated at 360 horsepower with a single Carter AFB four-barrel, it had solid lifters, a new forged steel crankshaft, distinctive wedge-shaped combustion chambers in the block, 11.25:1 compression, and a more aggressive camshaft. The only transmission choice was, rather fittingly, a four-speed manual. By 1962, the 409 engine was updated with a pair of dual quad carburetors, and its factory-issued horsepower rating jumped to 409, the perfect cubic-inch per horsepower ratio.

Equipped with this formidable powerplant, the Tuxedo Black over red vinyl Impala SS Convertible offered here benefits from a complete and highly accurate concours restoration executed under previous ownership. It retains much of its proper, correct-for-1962 SS equipment, including power steering and brakes, dual rear antennas with a push-button AM radio, electric clock, SS bucket seats, and period-correct narrow whitewall tires with spinner wheel covers. At time of cataloguing, the car’s odometer indicates approximately 320 miles—presumably the distance driven since its well-executed restoration.

Since entering the consignor’s collection of American muscle cars in 2012, this spectacular 409 has been rarely enjoyed and carefully maintained. Superbly detailed and finished in great colors, this Impala SS 409 Convertible will be the perfect car for cruise night, Chevrolet shows, or just that occasional top-down summer drive to the drag strip. 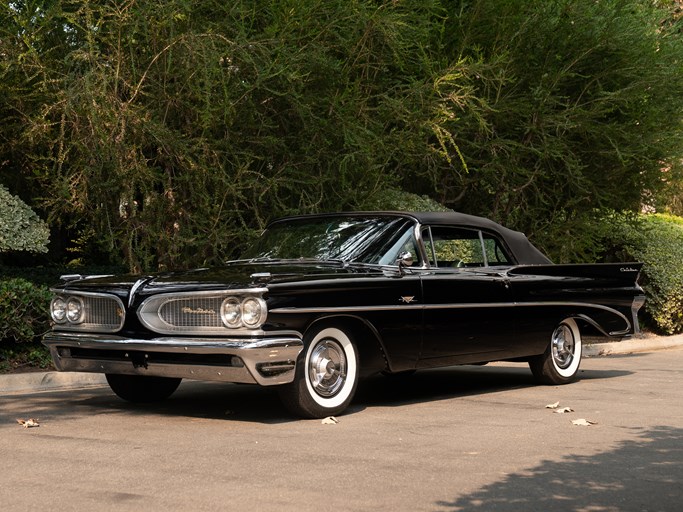