At the Paris Auto Salon of October 1936, Bugatti introduced the 57 C and 57 S, a new pair of sporting variants of their vaunted Type 57 model (which also debuted an improved second series at the same show). While the new 57 C featured a Roots-type supercharger (the “C” denoted the compressor) tacked onto the already-potent 3.3-liter dual overhead-cam straight-eight-cylinder engine featured in the base model, the 57 S was an even more purposefully built sports car which—despite its understated designation—actually varied quite significantly from both the 57 and 57 C.

In truth, Bugatti’s Type 57 S (the “S” indicated surbaissé, or lowered) featured a completely re-engineered chassis that was both shorter and lower than its two fellow debutantes. The front axle was articulated in halves, and the rear axle passed through the frame rather than under it for a lower overall stance. It was also equipped with a specially tuned engine with a higher compression ratio of 8.5:1; its dry sump accommodated its lower position in the chassis, and with its lower center of gravity, this configuration was also beneficial for competition—as was its magneto-driven ignition. The Type 57 S was fitted with a low-mounted radiator that wore a handsome V-shaped grille in the classic Bugatti motif for, as might be presumed, its aerodynamic effect at high speed. Additionally, a Roots supercharger could easily be fitted, thereby creating a 200-horsepower unit and the “SC” model designation.

The rarest of three available factory styles provided to the Type 57 S by Bugatti between early 1937 and May 1938 was the famous Atlantic Coupe. Featuring an exotic, streamlined body which borrowed heavily from contemporary airplane construction methods, this design was a true highlight of pre-war engineering and aesthetics. The Atlantic Coupe is undoubtedly Bugatti’s most revered, legendary, and valuable model created in its esteemed history. With just three surviving examples—each retained by one of the world’s foremost collectors—this fascinating Atlantic Coupe Recreation by Erik Koux is as close as anyone can get to the real thing.

Beginning in 1973, the Bugatti enthusiast and mechanical engineer Erik Koux began his ambitious goal of producing exacting facsimiles of the marque’s most esteemed models. Having already been well plugged into the European circuit of Bugatti collectors, restorers, and historians, Koux’s connections and professional background provided his budding project with a unique perspective. In the end, his efforts proved a tremendous success; today, his creations are hailed by the Bugatti community for their fastidious attention to detail, uncompromising build quality, and transparency, and they have been found in notable collections—including that of consummate enthusiast Jay Leno.

As noted in a review of Koux’s recreations for an August 2009 issue of The Bugatti Revue, “They are not mere look-alikes, they all have a significant amount of original Bugatti parts in them. The rest is precisely remanufactured duplicates. Type 57 engines converted to dry sump, and double oil pumps, power all but two of them...Donor Bugatti provide parts and titles, and yet there is no intent to deceive. The original Atlantics and the Koux recreations are so few, and so well known, that there can be no suggestion of passing one off as the other.” At any rate, Koux’s incredible methods of replication are detailed in explicit detail by multiple enthusiast publications. The provenance of this Atlantic Recreation offered here is similarly documented by many pages of accompanying correspondence from Koux and his affiliated artisans.

The third of approximately 15 Atlantic recreations produced by Erik Koux since 1981, this example is one of just five which wear a hand-wrought, riveted aluminum body. Research compiled by marque historians show that this recreation’s originating Type 57 chassis (number 57654) was completed at Molsheim on 12 April 1938. It was apparently ordered by a member of the ennobled Albigensian Séré de Rivières family, then fitted with a saloon body by Gangloff and later registered in Paris. By 1986, it had reportedly been acquired in a tired and well-used state by a French collector who was already familiar with Koux’s burgeoning portfolio of complete recreations and recreation bodies. By 1989, a plan for the car’s transformation to its present form had begun to take shape between the two interested parties, and Koux finally began work in November 1991.

After discarding the original Gangloff body and most of its 57 underpinnings, Koux mated a fabricated Type 57S-style chassis to the useful parts of its original front and rear subframe assemblies. A reproduction “S” crankcase was then mated with 57654’s original camshafts and some of its other harvested internals. After this unit was paired with a correct-type four-speed transmission and reproduction supercharger assembly, the entire powertrain was consigned to the Bugatti specialist Laurent Rondoni of Ventoux Moteurs in Carpentras, France for a complete rebuild and further machining to 57SC specifications.

Meanwhile, Koux enlisted a local Swiss manufacturer of fine wood furniture to create a body buck using his detailed technical drawings which were developed from study of the surviving 57SC Atlantic Coupe, chassis 57591. A specialist metal fabrication company in Lausanne was similarly commissioned to shape and rivet together the beautiful, distinctive Atlantic Coupe body from aluminum panels. Once complete and returned to Koux’s workshop in 1995, he executed the interior himself, and was equally responsible for final assembly of this remarkable creation. Additional sorting and mechanical tuning were completed through early 1996, and by the end of the year, the reborn 57654 was again road-registered in France.

Since entering the Gene Ponder Collection, this Type 57SC Atlantic Coupe Recreation has benefitted in a professional exterior refinish in dramatic dark blue, which pairs wonderfully with the two-tone blue and cream interior; the seats feature striking crocodile-pattern upholstery. Custom-made fitted luggage was commissioned from noted supplier Taris Charysyn and Co., and new door hinges were also fabricated. Mechanical work included the removal of the engine, which was found to be in good condition; engine gaskets were renewed at this time. Finally, special knock-off wheels were ordered from Borrani of Italy, with new aluminum discs fitted to each wheel.

Following the completion of this work, the car has been a much-admired centerpiece of the Gene Ponder Collection, collection which also contains additional Bugatti recreations executed by Pur Sang. There is no question that the three surviving Bugatti Atlantic examples (chassis 57374, 57473, and 57591) would transact for individual sums in excess of $40 million. This Atlantic Recreation by Erik Koux is a fascinating tribute to what many consider to be the most extraordinary car of all time. It is constructed with genuine Bugatti Type 57 components throughout, and would be a splendid acquisition for any serious collector of the marque who wishes to experience the thrill of this legendary model. 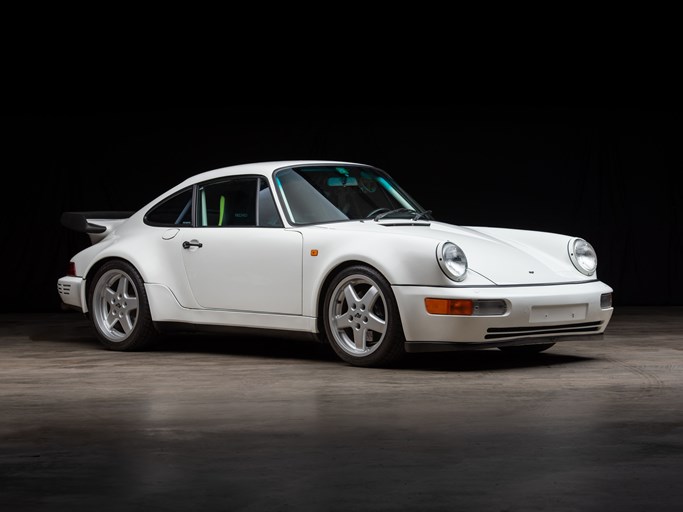