Richard and Alan Jensen began building special bodies for Austin Sevens in the midlands of England during the late 1920s. In 1934, they built a series of racing bodies for Fords entered in the Tourist Trophy race in Northern Ireland. This led to a small run of four-seater Ford V-8 tourers, first shown that October. The Motor tested one, and found it accelerated swiftly, and was “free from rolling, pitching, or other suspension vices.”

Early in 1936, Percy Morgan, a California industrialist, read about the Jensen-Fords in The Autocar, the other British motoring weekly. He liked the style and wrote to the Jensens, who promptly rewarded him with a franchise. He ordered two cars, one for himself and one for friend Clark Gable. The chassis were purchased through the Hollywood Ford dealer, to be shipped from the Ford branch in New Jersey to England for bodies – it was cheaper that way and easier to get them with left-hand drive. Morgan ordered a black car; Gable’s was to be silver with red leather. Perhaps 30 Jensen-Fords of all types were built from 1934 to 1936, only two or three of them imported to the U.S. All reportedly exist. Gable never actually took possession of his, merely posing with Morgan’s car for publicity.

The Jensens later developed a Ford-based car of their own, using suspension similar to that developed for Edsel Ford’s Special Speedster and a Special Sports model built with designer E.T. “Bob” Gregorie. Henry Ford wanted nothing to do with either, so Percival Perry, head of Ford of England, put Edsel in touch with the Jensen brothers. The Jensens subsequently built some 50 of these so-called S-Type Jensens, with a modified Ford chassis, standard V-8 drivetrain, and coachbuilt Jensen bodies, through 1937. Models included a saloon, a drophead coupe, and a four-seat tourer with rear door access on the left side only.

In the fall of 1938, this design was further modified to take a Nash eight-cylinder engine. This involved beefing up the Ford frame with a girder section at the front, culminating in stacked transverse leaf springs with kingpins between their outer ends. The result was a primitive form of independent suspension and a firmer base for the heavier Nash twin-ignition straight eight.

The first of these 4¼-Litre models, usually called “H-Types” after their Jensen serial numbers, was a saloon registered on 28 June 1938 in Worcester, England. Production of the H-Type was no doubt cut short as Britain was drawn into war, but four saloons, three tourers, and one drophead coupe were completed by 1941, and one saloon was registered in 1946. There were 14 H-Types in all, including a drophead with a Lincoln Zephyr V-12 ordered by Hollywood producer Louis “Bud” Lighton and an experimental fixed-head coupe with coil spring rear suspension. Of the 14, 11 are known to survive.

Fred Guyton’s Jensen, known as “H7” in the Jensen community, was registered as CKY986 at Bradford, Yorkshire, on 25 March 1939. He acquired it in 1998 from collector William McKnight of Los Angeles. As restored, it is painted red with burgundy fenders, and upholstered in tan leather. It was then presented at the 2008 Pebble Beach Concours d’Elegance. Although now an older restoration, it has been well conserved and presents proudly. Red carpet complements the exterior color, and the burl walnut dashboard has a Jensen script speedometer with a tiny clock at bottom center. The tachometer red-lines at 3,500 rpm and goes into a blue zone at 4,000. Mileage shown is barely 400, no doubt since restoration. The engine room is spotless and correctly detailed.

The rear seat passengers sit in what could be called a “side-entrance dickey” in British terminology, and each occupant has an individual Brooklands windscreen. Trafficators are recessed into the body sides. The luggage compartment lid drops down for access, the recessed spare wheel with it, and the compartment is lushly carpeted in red. The car received a class award at the CCCA Gilmore Experience.

Despite a healthy survival rate, the paucity of production has ensured that H-Type Jensens will forever remain rare. This tourer is the only example known in the U.S., and almost certainly the only H-Type of any description on the market today. 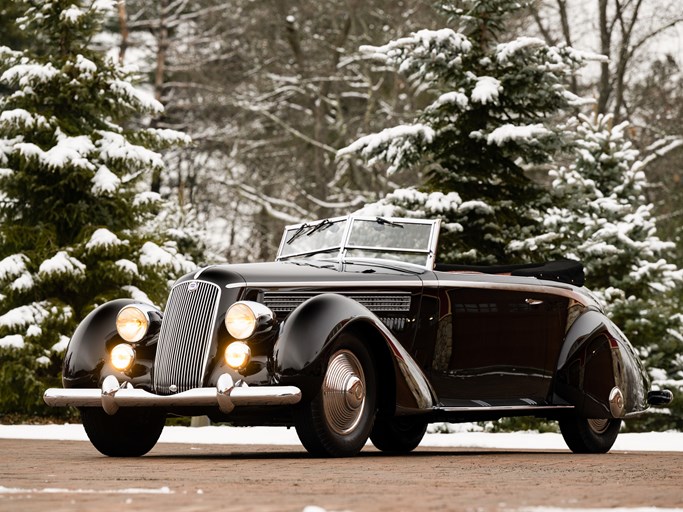