Chassis No.
Engine No.
Gearbox No.
11800759
4180132
4180287
View Inspection Report
Addendum: Please note that this car remains in secure storage and within RM Sotheby’s care in Ontario. North American travel restrictions might delay delivery to the United States for the successful buyer. Storage fees will not be incurred by the buyer, however.

The first of many improvements to Porsche’s legendary 911 sports car came in 1966, two years after production had commenced, with the introduction of the 911 S. Easily distinguishable by its stylish Fuchs five-spoked alloy wheels, the S featured a heavily revised engine producing 160 bhp.

In 1967 Porsche tested a new “Sport-o-matic” transmission at the 84-hour Marathon de la Route held at the Nürburgring. Four Porsches were entered, two of which were equipped with the Sportomatic transmission. The transmission proved effective, with the #14 Porsche 911 R equipped with the Sportomatic winning in impressive fashion. The success led Porsche to introduce what it termed as an automatic transmission, the Sportomatic, though it had no fully automatic setting, in 1968. The Sportomatic employed a conventional torque converter coupled to a vacuum-operated single-disc dry clutch ahead of the modified 911 four-speed gearbox. When the gear lever was moved, the clutch would disengage, re-engaging as soon as the driver’s hand was removed. As larger, more flexible engines were introduced, the Sportomatic became a three-speed, and in this form it lasted through 1980. It is believed that only 227 911 S models were built with a Sportomatic for 1968, many of which were replaced because of their unconventional operation.

This 911 S was sold new in Europe before making its way to Canada sometime in the 1980s. The current owner purchased the car in 1990 and commissioned a comprehensive restoration that was completed in January. The restoration included a complete stripping of the body, which was expertly refinished in the factory Burgundy color. The contrasting beige interior has been carefully restored as well and features the desirable Pepita fabric front seat inserts seats as well as a modern retro-designed radio. The engine is believed to be a factory replacement, stamped with the original number, and has been completely rebuilt by London Porsche in London, Ontario. It has been upgraded with stainless-steel performance headers. The gearbox also matches the original factory Kardex, a copy of which is included on file. Furthermore, a dossier of restoration receipts along with a spare tire, jack, and tool roll accompany the car.

A desirable European-delivery 911 S, this freshly restored example retaining its original Sportomatic transmission is ready to be enjoyed and cherished by its next caretaker. 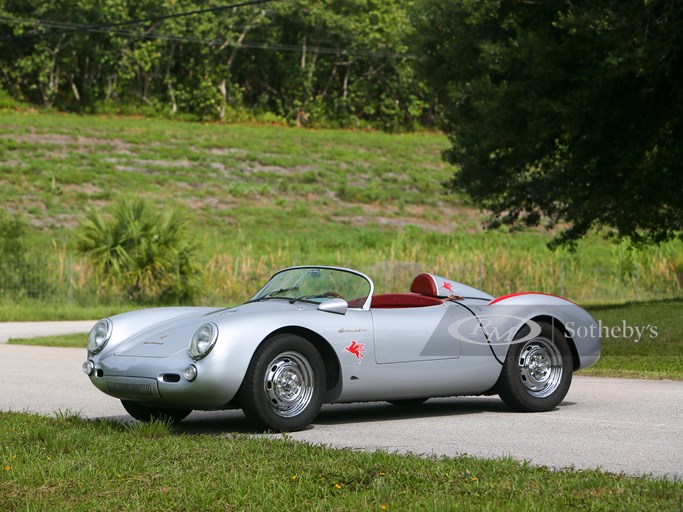