Chassis No.
8897 SF
Engine No.
8897
Gearbox No.
172/66
Body No.
99623
Documents
US Title
Catalogue
Please note that Internet bidding is not available for this lot. Interested parties that are unable to attend the sale may register to bid by telephone or place a commission bid online at rmsothebys.com.

The last generation of the original Ferrari super-coupés was the aptly named Superfast, produced between 1964 and 1966. Featuring updated Pininfarina coachwork with a dart-like tapered nose, gracefully rounded tail and glassy European greenhouse, it encompassed a highly developed version of the original Ferrari Colombo V-12, now displacing five litres and producing 395 hp, an output that was utterly remarkable for the era. The car’s top speed was 175 mph, a figure that could be achieved quite readily and with no particular special treatment on the part of the driver.

The 37th and final 500 Superfast produced, chassis number 8897 SF was also the last of eight configured in right-hand drive, and was finished in Avorio (20559A) over Beige (3309) with the special-ordered features of power windows, no rear seats, a rear window wiper and three air ducts on the front fenders, as well as factory air conditioning. It was originally supplied to the official British Ferrari dealer/importer, Maranello Concessionaires in London, on 6 August 1966.

The car was subsequently sold via Coombs and Sons (Guildford) Ltd. to its first private owner, Harold Samuels, who registered it in the UK as KGH 8D. Samuels requested a number of special modifications to the car, including a heated rear screen, built-in compass, a thief-proof switch fitted in the boot that would cut off the petrol feed, as well as an extra powerful servo fitted on the brakes that ‘must have a light pedal’. Mr Samuels did further work with ex-Scuderia Ferrari driver Michael Parkes, then of Maranello Concessionaires, to improve the drivability of the Superfast, detailed in historical correspondence that comes with the car. Subsequently it passed in June 1967 to Jack A. Pearce, owner of J.A.P. Engineering, and was re-registered under his treasured number, JAP 1, as well as outfitted with spotlights and J.A.P. cast alloy wheels. Later in the same ownership, it was refinished in the current white, a brighter shade than the original Avorio.

Following ownership by British stockbroker Jack G. Crowther, who drove it at the Ferrari Club France/FOC UK Bugatti-Ferrari meeting at Mas du Clos in 1971, the car was acquired in 1985 by Clive F. Deverell of London, then by Philipp Marcq of France. It was later purchased in 1988 by the famous Swedish Ferrari collector, Hans Thulin, sharing his collection with several Superamericas as well as a 250 GTO. It was acquired by the current owner in 1993.

Recent inspection of the car showed it to retain its original special-ordered features, and to have recorded 72,317 miles on the odometer. Its paint is older but in very good condition, while the interior is in excellent order. The car was inspected by Ferrari Classiche, at which point it was noted that no number was stamped on this particular car’s chassis frame; a situation that has been observed on other RHD 500 Superfasts. Further, the car retains its original, numbers-matching engine and gearbox. 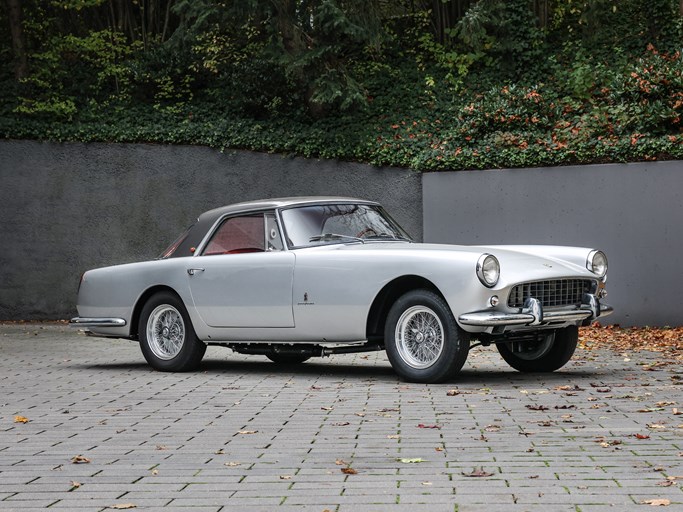