Please note that this lot will need to be collected from Monaco.

Please note that this lot is sold on a Bill of Sale.
○ VAT IMPLICATION

Delivered in February 2020 to a collector in Monaco, this otherworldly Porsche 935 is one of only 77 examples built for Porsche’s top clients. Based on the 991.2-generation 911 GT2 RS Clubsport, it sought to combine modern, relentless performance with looks inspired from an icon of Porsche’s rich motorsport heritage.

This newest incarnation of the 935 was formally unveiled in the fall of 2019 at Laguna Seca Raceway in California during Rennsport VI to help mark Porsche’s 70th anniversary. To the crowd’s delight, a factory driver unleashed it for several high-speed demonstration laps. Dr. Frank-Steffen Walliser, Vice President of Porsche Motorsport and GT Cars, stated that "this spectacular car is a birthday present from Porsche Motorsport to fans all over the world. Because the car isn't homologated, engineers and designers didn't have to follow the usual rules and thus had freedom in the development.”

“Spectacular” may be an understatement; in spite of a dry weight of a robust 1,390 kg, the new 935/19 is capable of a maximum speed of 340 km/h and can launch to 100 km/h from a standstill in less than 2.5 seconds. Justifiably, Porsche stressed that the 935 is a track-only machine, and cannot be legally registered for road use. Porsche began taking orders in August of 2019 and this limited-edition series quickly sold out.

For safety, there is a fully-integrated, welded-in roll cage and a 115-litre FT3 fuel cell, an electrically-triggered fire-extinguishing system, tire-pressure monitoring, and a special Recaro wrap-around racing bucket seat with six-point safety harness (HANS-device compatible). This unique seat design features cushions that can be adjusted laterally to accommodate wider drivers. A similarly-configured passenger seat was among an extensive list of racing-oriented options available, should an owner wish to include a courageous guest. The interior is trimmed in a combination of carbon-fiber and Alcantara. Air-conditioning is standard fitment, along with a central locking system. The driver faces a semi-circular, quick-release CFRP multi-function steering wheel that includes a pit speed limiter control. Many details of this incredible machine borrow cues from Porsche’s purest race cars. There are special LED headlights, multiple LED tail-lamps on the tail and rear wing endplates similar to those on the Type 919 LMP1 Le Mans prototype coupes, and an FIA “rain light”. The rear-view mirrors come from the GT3R parts bin, the aerodynamic wheel covers also pay tribute to the Moby Dick, and the dual exhaust megaphones contain “cookie-cutter” baffles remindful of those used on the 908 and RSR.

The new 935 is powered by a liquid-cooled, twin-turbocharged Type MA173 alloy-cased water-cooled six-cylinder boxer-type engine of 3.8-litres’ displacement with DOHC cylinder heads and VarioCam-Plus. This incredible powerplant develops 700 horsepower at 7000 rpm, and delivers its power to the rear wheels through a strengthened and solidly-mounted seven-speed Doppelkupplung (PDK) gearbox. The final drive includes an electronically-adjustable limited slip optimized for track days. The driver is given the choice of changing gears via either a short-shifting floor lever or paddle shifters. The titanium shift lever is topped with a special laminated wood knob of the type originally used on the 917 prototypes and revived on the Carrera GT.

The suspension utilizes McPherson struts in front, and a lightweight multi-link layout in the rear. Racing-type spherical bearings are used throughout. Porsche Motorsport provided the three-way adjustable shock absorbers and inserts, and there are adjustable front and rear anti-roll bars. The steering uses electro-hydraulic power-assist. The 18-inch diameter center-lock wheels are forged one-piece light-alloy from BBS, sized 11.5J in front and 13J in the rear, shod with Michelin race tires sized 29/65R-18 and 31/71R-18 respectively. The 935’s four-wheel disc brakes provide massive stopping power. The ventilated steel front rotors are 390 mm in diameter, clamped by six-piston aluminum monobloc racing calipers. In the rear are 380 mm steel rotors with four-piston calipers. Braking and handling are augmented by ABS, Porsche’s PSM (Stability Management), Stability Control and Traction Control systems all borrowed from the street-legal GT2RS. Porsche says it re-mapped the PSM unit to accommodate the wide Michelin racing rubber that comes standard, and drivers will have the option to adjust all three of those electronic systems to their liking, or even switch them off entirely. A driver-adjustable balance bar allows braking effort to be proportioned to the driver’s preference. For track work, there is a trio of on-board air jacks, a color dashboard display screen and data logger from Cosworth, and an analog boost pressure gauge mounted in the instrument panel alongside a Sports-Chrono clock.

Delivered in Agate Gray and wrapped in an optional Martini trim wrap, this is the second 935 completed by the factory. Since its delivery, the car has remained in storage in its owner’s collection and has not been driven, remaining virtually as-new throughout for its second owner.

There are few Porsches – in fact any automobiles – that combine so much performance, rarity, and excitement as the new 935. Only a few have come to market since its introduction; this example presents a wonderful opportunity for the any Porsche collector or serious and skilled track-day enthusiast. 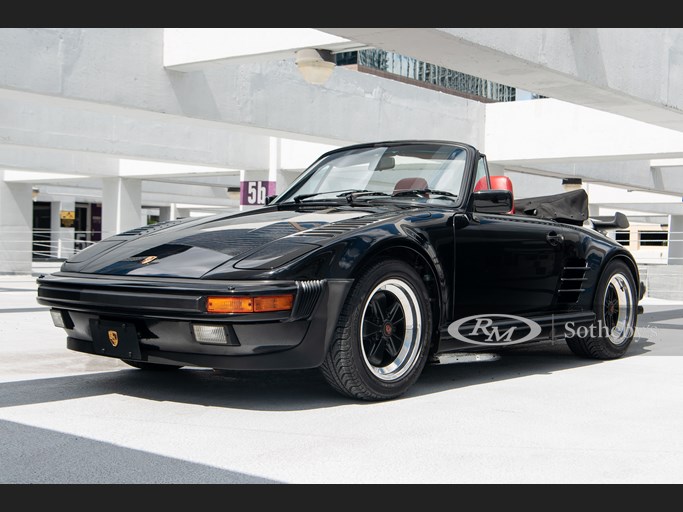