Addendum: Please note that contrary to the printed catalogue, this example is not equipped with a tubo scocca chassis.

In early 1952 Ferrari further developed its successful short-block Colombo-designed V-12 engine, increasing each cylinder to 225 cc for a total displacement of just over 2.7 liters. The resulting 225 Sport model was built on an evolution of the preceding 212 Export’s chassis utilizing the same 2,250 mm wheelbase. Approximately 21 examples were produced in both open and closed configurations.

Like the Export, the 225 S was envisioned as a more fiercely performing model with competition capabilities, and cars were thus assigned even-numbered chassis numbers and fitted with right-hand drive and triple Weber carburetors. Nearly every example was bodied by Vignale, the coachbuilder that soon became Maranello’s principal choice for the Lampredi-engined competition cars. Campaigned extensively in Europe during 1952, and later in SCCA events, the 225 S was piloted by some of the era’s greatest drivers, including Piero Taruffi, Giovanni Bracco, Eugenio Castellotti, Jim Kimberly, and Roy Salvadori, and notably emerged victorious at the 1952 Monaco Grand Prix, Bari Grand Prix, Coppa d’Oro di Sicilia, Coppa della Toscana, and Coppa d’Oro delle Dolomiti.

This rare and beautifully finished 225 S claims period competition use and a more recent resume of premium event participation, constituting a very special early Ferrari. Chassis no. 0164 ED is the second of six closed cars in total, and roughly the fifth of all 21 examples built.

Originally finished in traditional rosso with a beige leather interior, 0164 ED was unusually built with no fender portholes (a typical Vignale design cue) and featured secondary engine vents positioned under the headlamps, an outside fuel-filler cap on the driver’s-side C-pillar that fed through the rear shelf, and a lack of chrome trim on the hood.

After being sold new in early 1952 to Italian privateer and former ace fighter pilot Franco Bordoni-Bisleri, the 225 S was immediately entered in the XII Giro di Sicilia in early April, where, wearing #403, the car was driven by Bordoni and Olympian bobsledder Alberto Della Beffa to a 6th-overall finish and 4th in Class. In early May Bordoni and a Mr. Geronimo drove the car to a 10th-overall and a 2nd-in-Class finish at the Mille Miglia. Later that month the Ferrari was sold to the Parisian tire company Kleber-Colombes, which had recently brought the first tubeless tire to market. The berlinetta was then repainted in French blue and entrusted to the noted driver Jean Lucas for further competition use.

Lucas and Jacques Peron roared to a 2nd-overall finish at the 12 Hours of Casablanca in late May 1952, and a week later the car finished 4th overall at the Monaco Grand Prix. Lucas then achieved the first of three overall victories when the car won the Grand Prix d’Orleans in early June. Outright wins followed at the Grand Prix de Bressuire in late June and Les Sables d’Olonne in mid-July.

Jean Lucas raced the 225 S in the Roubaix Grand Prix in France in mid-September 1952, but an early retirement resulted. Period photos demonstrate that shortly thereafter, 0164 ED was delivered to the Ferrari factory for body repairs sustained during a rollover crash, and as the car was still decorated with race #441, it is reasonable to assume that the DNF was the result of an accident at Roubaix. The repairs, however, led to one of the car’s distinguishing characteristics, a small cooling vent located towards the front of the hood. At the Circuit de Vitesse d’Agadir in Morocco in late February 1953, Lucas again achieved a 4th-overall finish. A month later the French driver performed his final race in the 225 S, finishing 3rd overall at the Circuit de Nimes.

In 1954 the Ferrari was sold by Luigi Chinetti Motors to Robert Tappan, an enthusiast residing in Ohio, and he entered the berlinetta in at least one SCCA race, with no result recorded at an Akron Airport event that year. Later in the decade, the 225 S was acquired by Alfred Momo, the New York City dealer and tuner who famously went on to serve as chief mechanic for Briggs Cunningham’s accomplished scuderia. The car then subsequently passed to two more New York–based enthusiasts before the end of the 1950s, a Mr. Trooter and John Levitt.

In 1959 the Ferrari was sold to Eugene Aucott of Philadelphia, and around this time the car was accompanied by a second engine modified to a greater displacement of 3.0 liters. Mr. Aucott retained possession for at least four years, notably presenting the handsome 225 S at the New Hope Auto Show in Pennsylvania in August 1963.

While the next 20 years saw little recorded activity for the Ferrari, the car was briefly documented in the first issue of Cavallino magazine in September 1978 in an article about the 225 S model written by the respected marque expert Edwin Niles. In 1983 chassis no. 0164 ED was purchased by the esteemed Ferrari collector Anthony Wang, and he is believed to have kept the car for several decades among his impressive gathering of notable Maranello speed machines.

In 2012 the 225 S was acquired by the consignor, and he went on to use the berlinetta in several premium celebratory events, including three appearances at the Monaco Historic Grand Prix in 2012, 2014, and 2016. The Ferrari also participated in the Mille Miglia Storica in 2013 and 2014 and in the Lavant Cup at the Goodwood Revival in 2015. This impressive record was capped with an invitation to and presentation at the Pebble Beach Concours d’Elegance in August 2017.

Also photographically depicted in several issues of Cavallino magazine, the accomplished Ferrari features a number of notable original elements, including the factory-appointed dashboard, and it is accompanied by a matching numbers engine block. For improved performance and safety in vintage events, the car has been fitted with a Tremec five-speed gearbox, with its original numbers matching unit preserved on the side. The beautiful coachwork was also refinished by the experts at Automotive Unlimited in Warsaw, Indiana, and the interior was reappointed in proper beige leather, including re-upholstery of the racing seats.

As one of only six examples finished with closed Vignale coachwork, this exquisite 225 S would make a superlative addition to any gathering of early Ferrari competition cars. It is accompanied by a well documented history file, service invoices, period racing photographs, and an original factory listing of mechanical refinements (prepared for American ownership in November 1953). The beautiful Vignale body and fastidiously detailed engine compartment showcase one of the rarest of Maranello’s 1950s berlinettas, offering serious Ferrari enthusiasts an unusual opportunity to acquire a well-maintained example with bona fide period racing history. 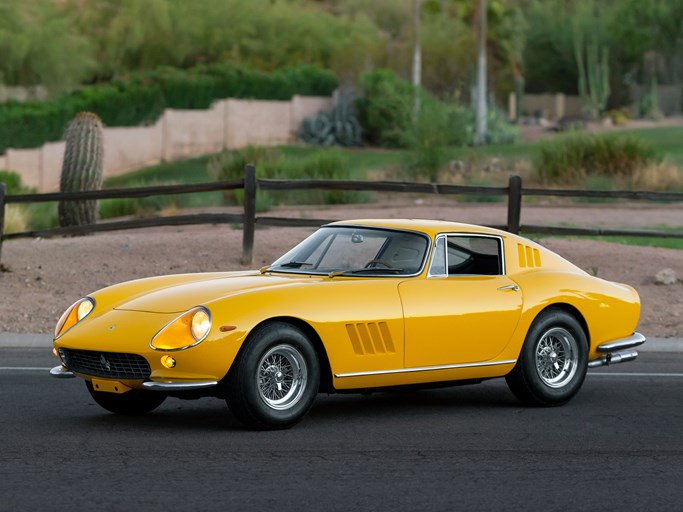