Italian manufacturer Iso’s beautiful Grifo offered a remarkable combination of a chassis designed by Italy’s great automotive engineer Giotto Bizzarrini, a reliable Chevrolet V-8 engine, and svelte coachwork drawn by Giorgetto Giugiaro and built by Bertone. The result managed to look both sensual and aggressive at the same time but was also a highly competent grand-touring automobile. Only 471 examples were produced in a healthy production run that lasted until 1974. Today the cars continue to enjoy considerable favor with enthusiasts the world over for their combination of power, style, and comfort.

The Grifo GL Series I offered here was delivered new to the Dutch real estate mogul Maurits Caransa, who was kidnapped in 1977 and famously negotiated his own $4 million ransom payment! It was delivered in white with a black interior, a 327 cu. in. engine, and automatic transmission. Most significantly, this was one of just six Grifos delivered with an original and rather unusual Pavesi sunroof, featuring dual removable panels as a sort of “enclosed T-top” arrangement, and was also fitted with factory air-conditioning. In sum, it was amply optioned for enjoying the best that long-distance European travel could offer.

In the early 2000s, a subsequent owner in the Netherlands entrusted the Iso to well-known marque specialists Roberto and Federico Negri, who completed a full restoration in a bright Giallo. In the course of this work, the car was upgraded to the ultimate “7-Litri” specification, with a period-correct 427 cu. in. V-8 and new automatic transmission, and was also fitted with ventilated disc brakes and power steering. According to Federico Negri, the job was very complete, with the front and rear clips, doors, and hood all properly restored, along with the chassis. Work was wrapped up in 2005 at a reported cost of over €200,000.

In its current ownership since 2015, the car has been upgraded with a new butterscotch leather interior and was driven with ease on the 2016 Copperstate 1000, running straight and true and challenging all comers with its performance. Indeed, RM Sotheby’s specialist Donnie Gould marveled at the Iso’s performance, noting rather abashedly that it was the only thing that could outrun his GT350 H—for those who know Donnie, quite an admission!

Very well-suited for further vintage rallies, in comfort and style, this is one of the best-prepared and striking Grifos available—built by specialists to the ultimate specifications, with its original Pavesi sunroof and the uprated “7-Litri” engine rumbling menacingly beneath the bold “penthouse” hood. 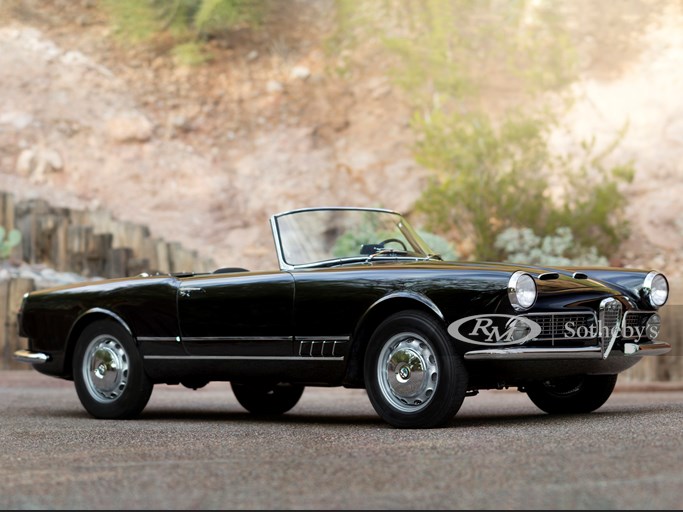